While you're stuffing up on turkey tomorrow, our Cal hoopsters will be getting ready to go into action down in the Sunshine State. So let's take a look at our potential opponents for the next two days! We know one of the teams, but who will be the second? Let's find out how we'd fare. (Thanks to Kodiak for digging up this info.)

Allen is a guy that I’ve seen grew since his high school Pennsbury days. He’s transformed from a very skinny high school kid to a mammoth. I will never forget his first half performance he had against Harry S. Truman, the school where former Niagara guard Tyrone Lewis attended. Allen blocked 10 shots in the half. He was all over the place. He’s brought his smart defensive instincts to Temple.

Allen averaged a double-double last season; the first Owl to do so since 1970-1971. He’s as good a passing big man as any big man in the country. He’s as fundamental as they come.

If there is a complaint about Lavoy, he can be a bit too unselfish. He can routinely knock down mid-range jump shots if he wants to, but he continually gives up those shots. I’d like to see him more assertive on the offensive end. Especially now as a senior.

How we matchup: Poorly. Although the size comparisons are about the same, Temple definitely has a very complete team to reckon with. Allen and Harper Kamp will do battle, but it'll be tough for Kamp to do anything offensively. Jorge Gutierrez will go at the Owls Latin Sensation, Juan Fernandez.

Offensively, Fernandez can do a bit of everything. Unlike Sanchez, Fernandez can create his own shot. They both have high basketball IQ’s; they’re always a step ahead of the defense.

Fernandez supposedly loses a step defensively, which should make things interesting because we all know how good Jorge is at NOT gaining a step offensively.

While Markhuri Sanders-Frison and Michael Eric are similar in their production value, Eric probably has an edge because he can step out and shoot (not a lot of range, but definitely more than MSF), as well as defend. The big question is how Allen Crabbe and Gary Franklin will deal with A-10 Sixth Man of the Year Ramone Moore and Rahlir Jefferson. Moore especially could make life particularly difficult for Franklin as he's been the top offensive threat in their early games. Both of these guys have a combined three years of extra experience under their belt, and you figure they'll take advantage of their opportunities.

All in all, Temple's experience gives them the edge over Cal. It'll come down to how well the Bears can defensively challenge the Owls and force them to make mistakes on the offensive end.

Georgia Bulldogs (50% chance we play them on Friday)

Leslie finished last season with averages of 14.8 points and 6.8 rebounds per game. He also led the team in Sportscenter Highlights with an array of high flying dunks. Even more so than Thompkins, it was important for Leslie to return to school to try and work on his jump shot if he hopes to be successful at the next level.

This nasty play over DeMarcus Cousins is probably what most people remember Leslie by last season.

Leslie is likely headed for a future spot in the NBA, so look out for him.

How we match up: Curiously. Despite Leslie's success, the Dawgs have struggled to win games, mainly because they have noticeable holes in their unit. Other than Dustin Ware and Gerald Robinson Jr. running split duties at the point and coupling that with solid outside shooting, Georgia seems to ride the play of their SEC superstar. Look for Gutierrez to be put on Leslie and dare the rest of the offense to make plays on their own.

The wild card is Trey Tompkins, who like Leslie is a potential top 20 draft pick. because a healthy Thompkins makes this Georgia team immediately more unstoppable.

Thompkins averaged a team high 17.7 points per game and 8.3 rebounds per game. He is a candidate for SEC Player of the Year and was named to the preseason Wooden Award watch list. He is versatile with the skills to play on the wing but at 6’10" has the height to play some in the pivot.

He hasn't played yet this season though. His status for the Notre Dame game is doubtful.

Thompkins spoke to the media on Monday for the first time since injuring his ankle and said he hasn’t been cleared to practice.

"Progress is great," Thompkins said. "I’m starting to run and cut and things like that, so I should be back on the court sometime soon. I can’t give you a definite answer."

At 6'9", 245, he's going to give Kamp all he can handle. I'd be terrified to see him on the court teaming up with Leslie. Let's hope it takes him until Sunday to get fully healed.

Notre Dame Fighting Irish (50% chance we play them on Friday)

Notable stats via small sample size: Top 50 in almost every offensively relevant category. But really, it's hard to discern any value from these numbers with the quality of competition they've faced.

Big star: With Luke Harangody and Tory Jackson out, there doesn't appear to be a big star, so the Irish could ride the hot hand, as is typical of their head coach. We Are Notre Dame has more.

We pretty much know what to expect at this point from the head coach - 3 scoops of vanilla & 2 scoops of chocolate leading a perimeter based offense that rides hot hands for scoring. Brey's teams have never been confused with lockdown defenses that impose their will without the ball. Much too often over the years, the team has been susceptible to allowing easy buckets in the paint. Once in a blue moon, a Mike Brey team surprises people with their athleticism. Brey has notorious substitution patterns, relying on a short bench for reasons only he knows.

How we matchup: Probably a wash. Wish I could say for sure. Notre Dame has a lot of experience on their side, which should work in their favor. Their perimeter players aren't great though, which should negate the inexperience of our wings. There's only one potential nightmare matchup, according to the Chicago Sports Guru.

Player to Watch: Tim Abromaitis, SF
Abro is a nightmare of a match-up for opposing coaches. He can stroke it from the outside, put the ball on the deck, and also use his height to post up smaller defenders. For a player who had 20 career points heading into last season, his development is quite incredible. Can he take another step in productivity? If so, the Irish will have a dangerous trio on the wing with Abro, Martin, and Hansbrough.

Yeah, I don't want Crabbe dealing with that.

Going against guys with four to five years of experience gets me a little worried. We'll get a better idea on Thanksgiving Day when we see them up against the Dawgs, but I'd be very happy to get a split against two of these three teams. 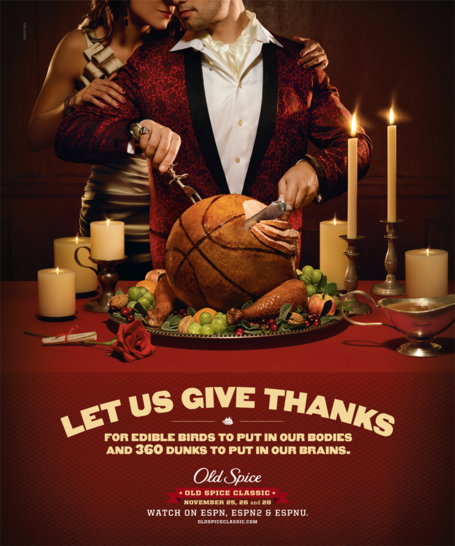 (Thanks to Jackie Adkins for the poster)