So, at halftime, the score was 31-0 in favor of Stanford. I had never seen anything like it. Even in the nadir of the Holmoe era when I was at Cal, we kept the Big Games fairly close. Games that probably should have been more like Saturday's game were only losses by 7 points or so. This was uncharted territory.

But it did harken back to the #1 most important thing that was taking place during the Holmoe Era....increased focus on THE BANDS! The silver lining of the football sucking is that people do pay a lot more attention to the band. This is especially true during the Big Game when people can make a direct comparison between the Stanford and Cal bands. First, we started off with the Stanford. 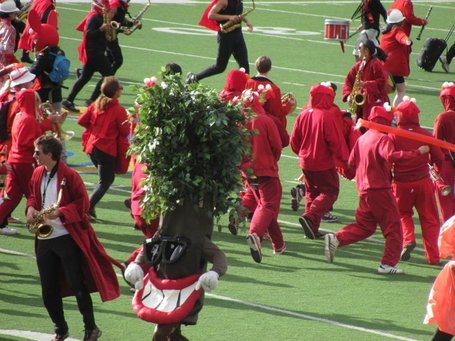 1. This year's Tree is worse than ever.

2. If this looks like a seemingly random collection of people in red aimlessly meandering the field while attempting to play music in unison.....well, that's because it is. It is the Stanford band. More after the jump. GO BEARS!

I wasn't much paying attention to the Stanford show, so I don't have specific critiques. My vague memories has the same critiques, which is a loosely organized concept with poor musical execution. They had something about Sigmund Freud coming back from the dead. And they would ask him questions and his answer would be like "BRAAAAINNNNS!" As usual, it is a moderately funny concept, but it is just one joke and one joke cannot make an entire show! 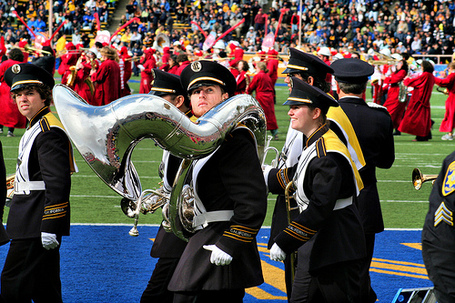 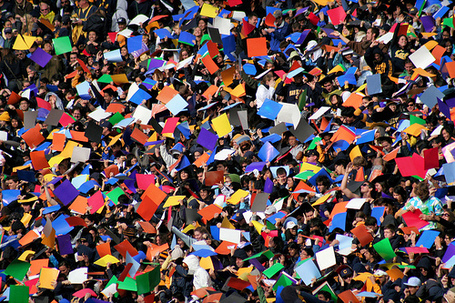 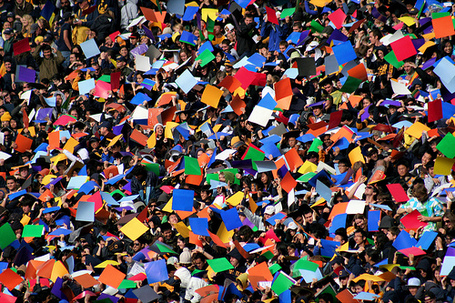 After last week's controversial show, the Cal band hit a grand slam this week. They did the Dance show, which resulted in announced Al Locher saying the phrase "Slap.....the.....Beat." I had gone up the stadium to say hi to some friends in row a billion, so I have some more global shots of the show. 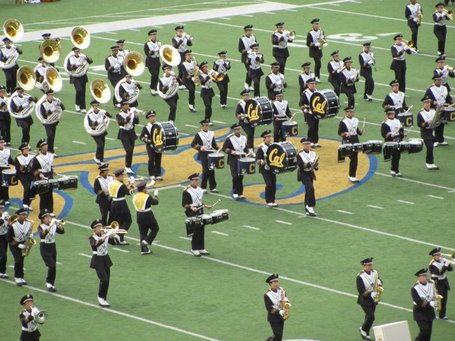 They made hearts, while the Drum Major did his baton routine. Then, they broke the hearts. 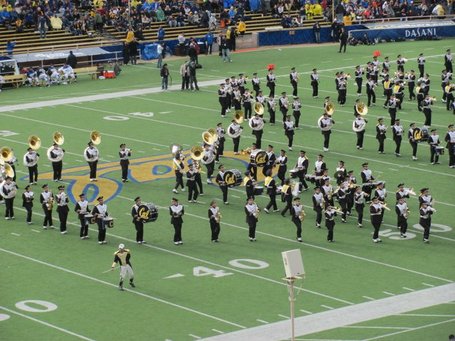 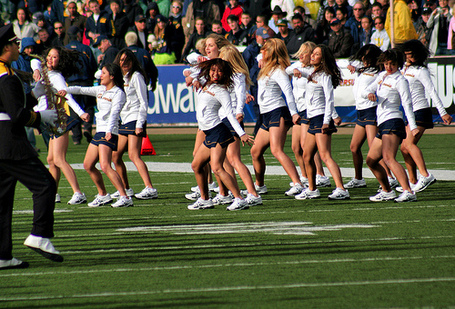 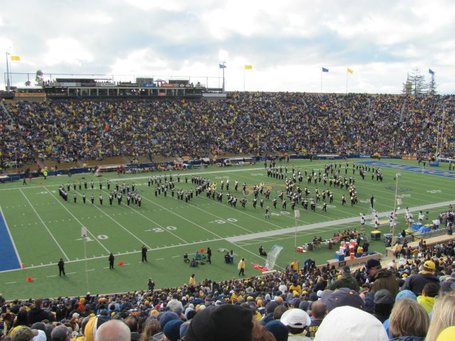 I presume this was a message to all people named Dan that they should Ce! 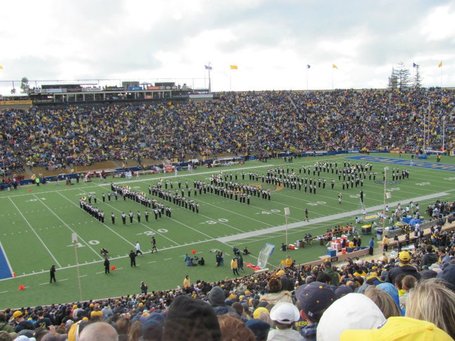 There were several dance blocks. There was one to some Lady Gaga song (I'm going to lose most, if not all, of my street cred by saying I didn't know the name) with a really good choreographed dance block.

I found this interesting video on YouTube that has some of the Stanford band and some of the Cal band:

Here was the band's show in full:

Soon, it was time for the second half kick off! 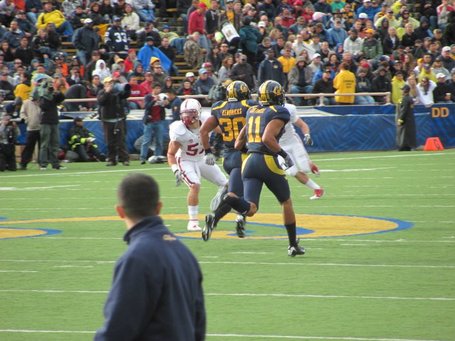 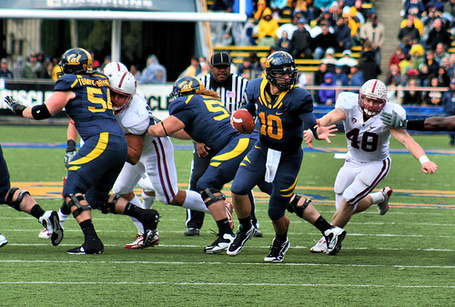 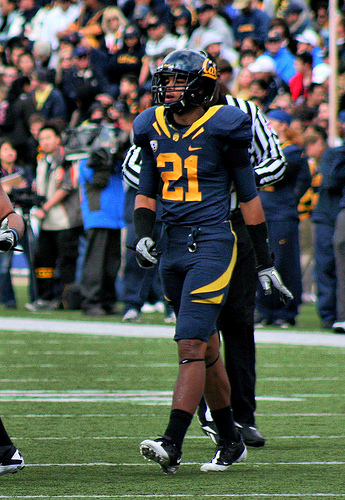 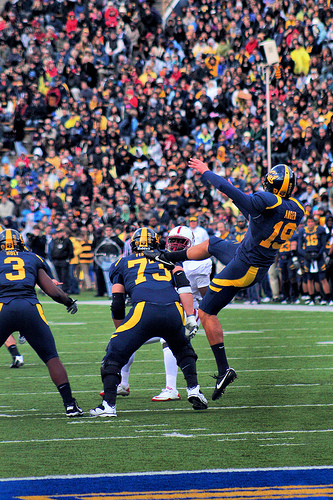 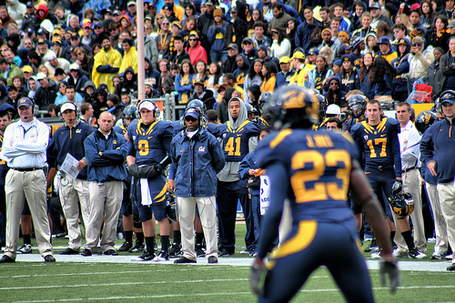 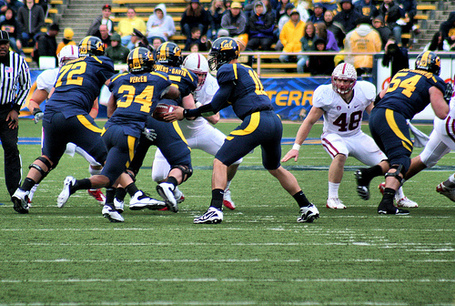 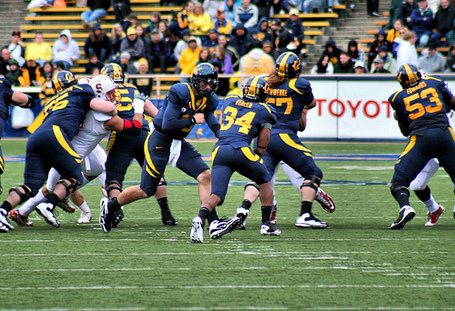 We finally scored a TD in the 4th quarter and the remaining fans went crazy! 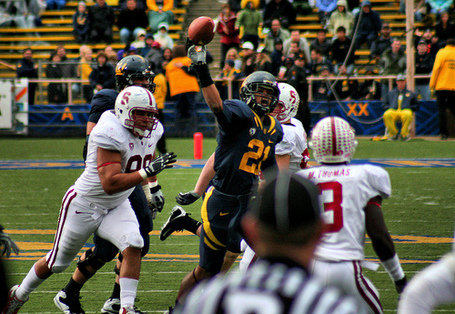 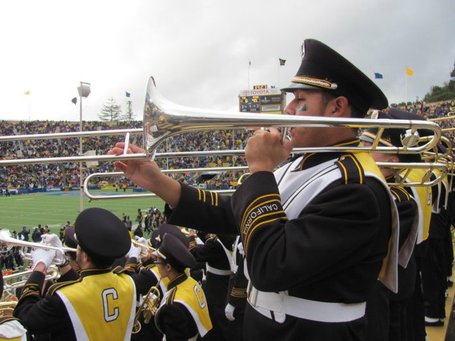 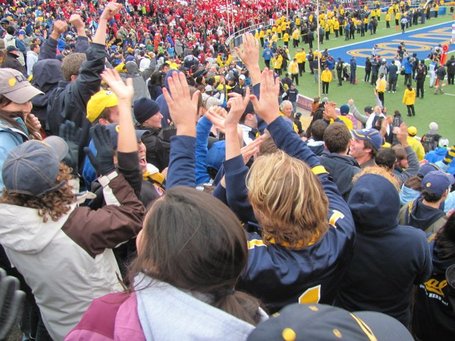 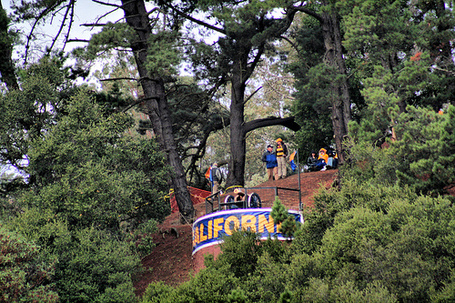 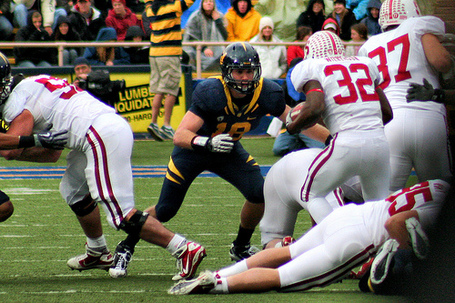 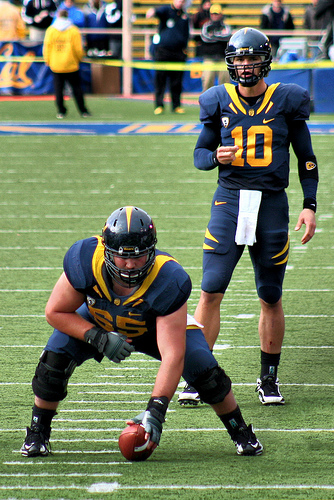 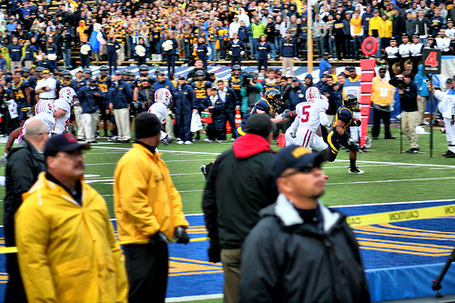 They had a lot of security on hand at the end of the game. However, they acted in a somewhat contradictory manner. On the east side of the field, they were not allowing people to come onto the field. On the west side, however, the security just stood there. It took the Stanford fans a while to actually rush the field. Like they were psyching themselves up or something. 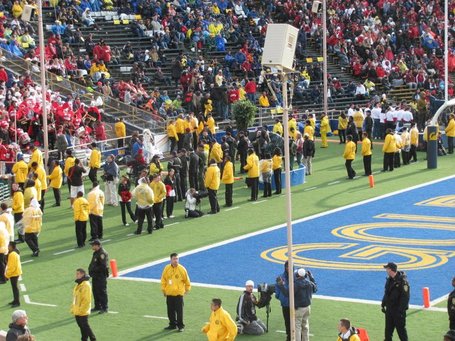 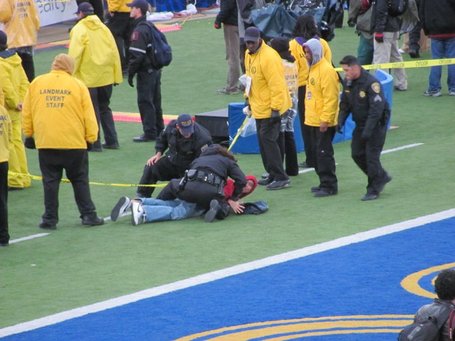 GO SECURITY GUARDS GO! Show those Stanford fans that they don't just get everything and whatever they want, merely because they attend Stanford! 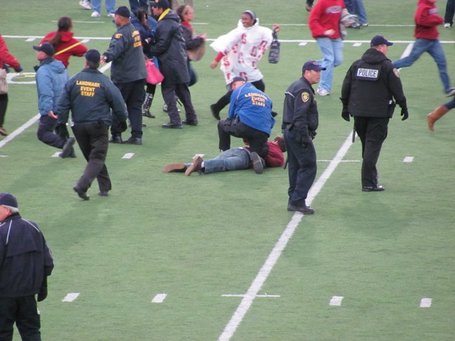 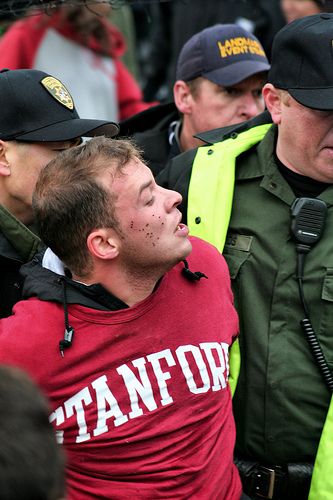 This might explain the odd actions of some of the security personnel letting Stanford fans onto the field. There is a mole in our midst! 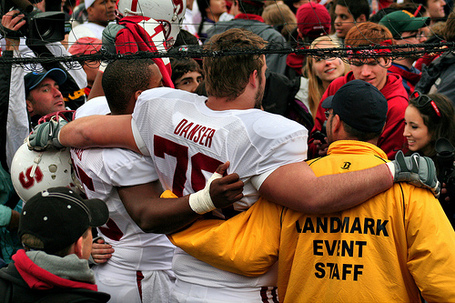 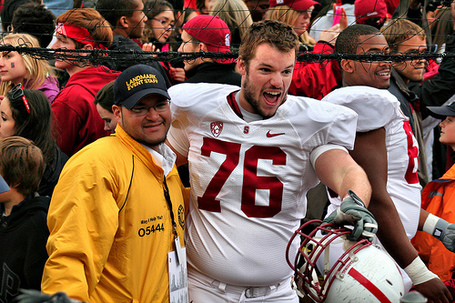 BETRAYED BY THE VERY PEOPLE TASKED TO PROTECT US!

It was a fairly pathetic field rushing. Not only were there all these arrests, but they barely filled the South end zone. So, Palo Alto is still Bear Territory. The South end zone is, maybe, Cardinal territory. 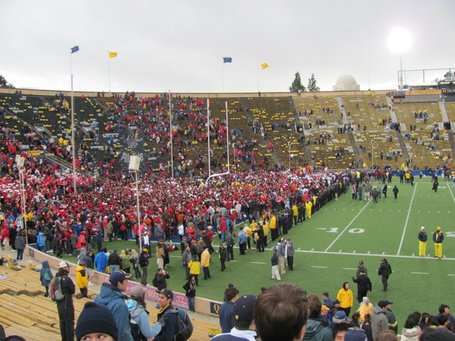 That photo will only make it that much sweeter when we beat them next year. Final words on this game:

Unless you are Jeff Tedford or Sandy Barbour, this game is not a problem that exists in your life. This game exists outside of your abilities to exert any reasonable control (this coming from the guy who is ridic superstitious). There is no point in being unhappy over things outside of your control. Do not accept any unhappiness that a sporting event attempts to provide you. Feel free to accept the happiness, but reject the unhappiness. It serves no purpose to accept it and will just upset you when you have no ability to solve whatever the problem may be and erase the unhappiness.