Share All sharing options for: Fantasy Week in Review - Week 11

And class of 87's fall from first is complete after that incredible 18-3 week.

atomsareenough, vanman1013, and Top Dog tied for the best performer of the week, going 13/21. Which doesn't really seem all that special, so I'm not going to go through their weekly picks.

That's right, it's time for:

I should add that I just checked my lineup and found that my TCU defense/special teams is on a bye - so it's time for a pick up depending on matchups! And I picked Cincinnati. Why? Not because they're great, but because they're playing...Rutgers. If that doesn't show you how little confidence I have in the Rutgers offense, I don't think anything will. 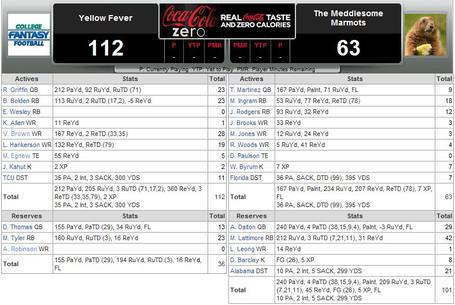 CBKWit asked me how I made the playoff despite scoring more than 250 fewer points over the course of the season. I responded with, "Pluck and determination. Failing that, sheer luck." I should have added scrappy scrappiness, grit, passion, aura, mystique, and just knowing how to win. All of which contributed to my defeating The Meddlesome Marmots 112-63. Not that Robert Griffin, Brandon Bolden, and Vincent Brown had anything to do with it. I just know how to win. 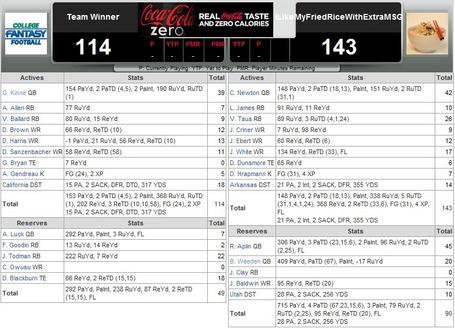 ILikeMyFriedRiceWithExtraMSG defeated Team Winner 143-114 because clearly Team Winner doesn't know how to win. Also he ran into the ineligible freight train known as Cameron Newton and his 42 points, which managed to trump 39 points from Greg Kinne. MSG also got decent performances from Vai Taua and his receiving corps to make up for LaMichael James' worst game of the year against our sturdy Golden Bears defense. 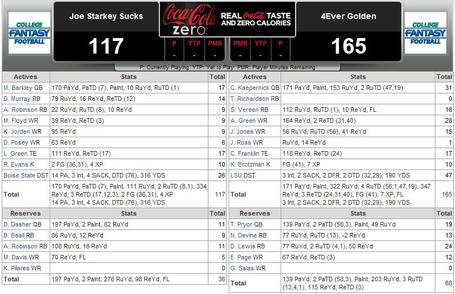 4Ever Golden crushed Joe Starkey Sucks 165-117 despite getting zero points out of Trent Richardson on the back of an amazing performance by the LSU defense. 47 points?!? What the hell? His bench, backs and receivers weren't too shabby either, in outclassing Matt Barkley and the Boise State defense. 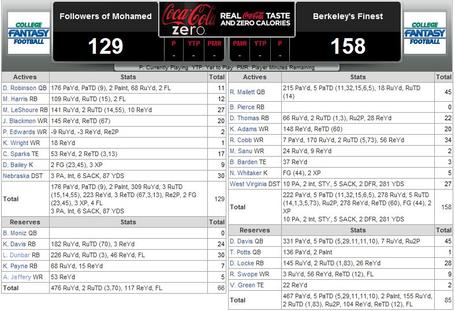 Berkeley's Finest ended Followers of Mohamed's playoff hopes with a 158-129 victory behind Ryan Mallett, Randall Cobb, and the West Virginia defense. Denard Robinson's fall from superhuman status did CBKWit in, as he put up a total of 11 points in this loss, which wasn't nearly enough. 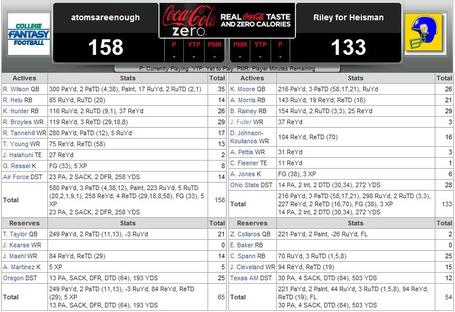 And our HydroTech's fantasy season comes to an ignominous end. We hardly knew ye. 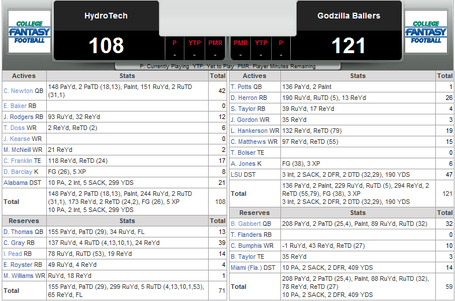 Godzilla Ballers put the final nail in Hydro's season with a 121-108 victory, even with a total of 1 point from Taylor Potts. But hey, he had that same LSU defense. And 0 points from his TE. Man, what's up with these guys? 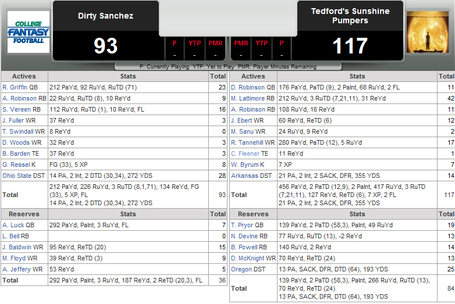 Tedford's Sunshine Pumpers march into the playoffs pumping that sunshine after a 117-93 victory over Dirty Sanchez, largely through the efforts of Marcus Lattimore, though the end result could have end up being even more lopsided had he optimized the use of his bench. Dirty Sanchez got 23 points from Robert Griffin and 28 from the Ohio defense, but that was about it. 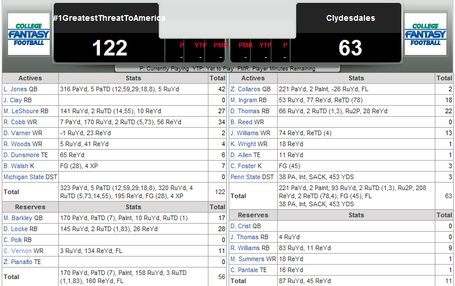 #1GreatestThreatToAmerica (Bears?) did what they should do to Clydesdales, in ripping them apart 122-63. Clydesdales barely put up a fight, with 40 points from Daniel Thomas and Mark Ingram but 23 combined from seven other roster spots. That's a boatload of fail. Any two of the three out of Landry Jones, Mike LeShoure, and Randall Cobb would have been enough to secure the victory by themselves. 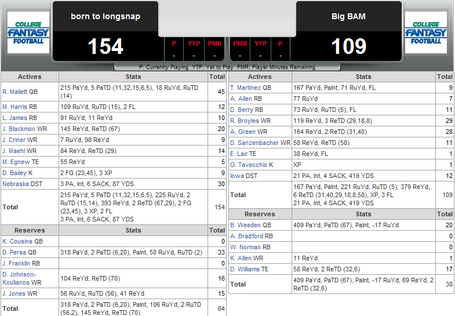 born to longsnap put Big BAM out of its misery 154-109, as, even with 57 points combined from Ryan Broyles and A.J. Green, there just wasn't enough to compete with Ryan Mallett, Justin Blackmon, and the Nebraska defense. Better luck next year, Scootie. 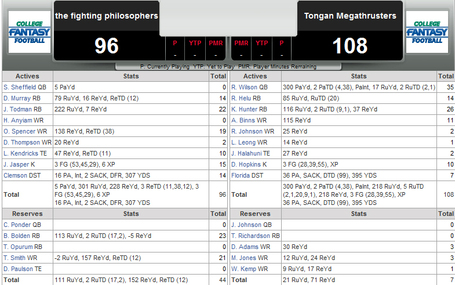 The Tongan Megathrusters ended their season on  a positive note by defeating the fighting philosophers 108-96 in what was the most competitive matchup of the week - as well one that could easily have been swung had the philosophers played either a real-live starting QB or his one active WR on the bench. Yeah.