Share All sharing options for: Fantasy Week in Review - Week 10

class of 87 continues to stay atop the leaderboard...though this week wasn't one of her finest.  Details after the jump.

Otherwise, this week was another big bucket full of fail.

Oh noes! My defense is really starting to slip!

Robert Griffin and the Baylor offense faceplanted, leading to Yellow Fever's 137-124 loss to Followers of Mohamed. Playing Darron Thomas over the aforementioned Griffin would have led to a victory, as would playing Marc Tyler over Ed Wesley. Oh well. Followers of Mohamed were led by Denard Robinson, Keydrick Payne, and Justin Blackmon, each of whom went for over 30 points. 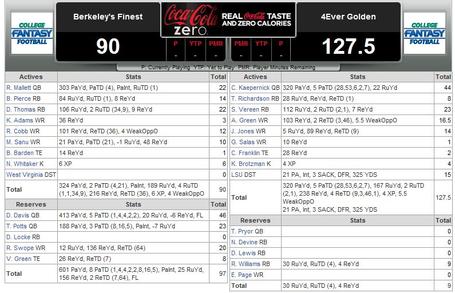 4Ever Golden pistolwhipped Berkeley's Finest on the strength of 44 points from Colin Kaepernick and 23 points from Shane Vereen, though relatively little elsewhere. Berkeley's Finest got reasonable performances from most of its team, but nothing from its defense...which was on a bye. Chalk up another loss to suboptimal bench usage. 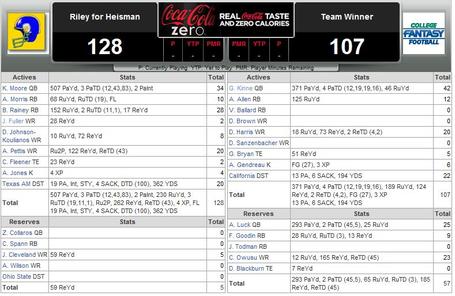 Riley for Heisman defeated the misnomer known as Team Winner 128-107, as Team Winner had three inactive played, yet still put up a reasonable point total behind Greg Kinne, the California defense, and a receiver whose name I can't make out combining for 84 points. Go team. 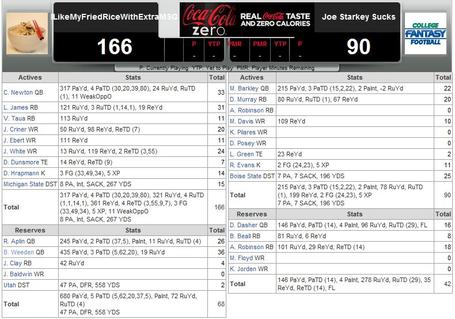 ILikeMyFriedRiceWithMSG curb stomped Joe Starkey Sucks 166-90, as each of its players went for at least 7 points, led by its Heisman hopeful combination of Cameron Newton and LaMichael James. Meanwhile, Starkey had one RB and two WRs who were inactive, though his bench wouldn't have helped much this time either. 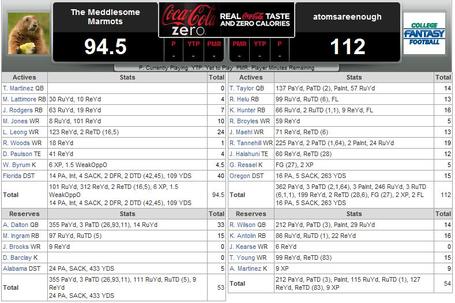 atomsareenough surged into first, defeating The Meddlesome Marmots 112-94.5. atoms got by with a balanced attack in which none of his players went for even as much as 20 points (which seems hard to pull off with a full active team), and benefited from some good fortune (or his opponent being asleep as the wheel) as Taylor Martinez didn't play, but his backup Andy Dalton put up 33 points. Which would have made the difference.

born to longsnap continues his winning ways, while Hydro picks up another victory...though probably too late to advance to the playoffs. 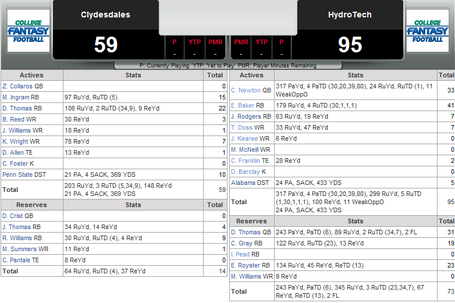 In a stunning display of ineptitude, Clydesdales managed to only put up 59 points in falling to HydroTech 95-59. Palindrome! That meager point total was due in no small part to not having an active QB or kicker, but...yeah, that's still pretty sad. 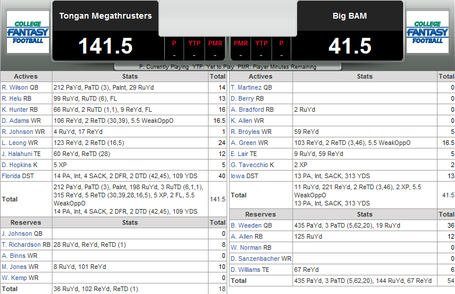 And just when we thought Big BAM might actually know what she's doing, she goes out and loses 141.5-41.5. Wow. Let's just move on. 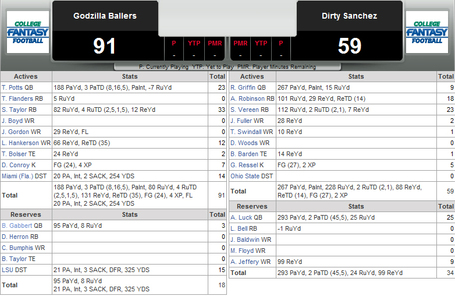 Apparently I should have browsed this week's scores, because everyone in league 2 has fallen asleep. Godzilla Ballers defeated Dirty Sanchez 91-59 as Taylor Potts put up 23 points in reclaiming his starting job for the Red Raiders. 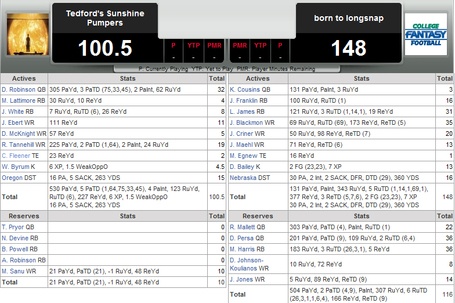 born to longsnap remains the only respectable team in league 2 based on a thumping delivered to Tedford's Sunshine Pumpers, 148-100.5. This was managed even with Kirk Cousins putting up all of three points, but having LaMichael James, Justin Blackmon, and Juron Criner will cover for those kinds of things every now and then. 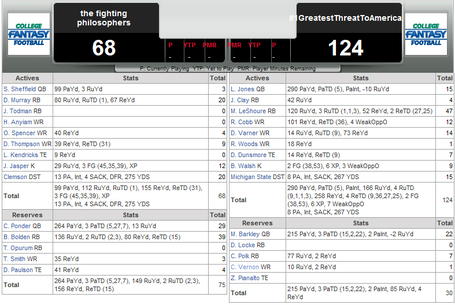 #1GreatestThreatToAmerica laid the smacketh downeth on the fighting philosophers 124-68, who actually got 3 points out of their erstwhile fantasy starter/real life backup QB, Steven Sheffield, as well as 20 points each from DeMarco Murray and the Clemson defense. But that was about it, though subbing in Christian Ponder and Brandon Bolden would have at least made things more interesting.