Share All sharing options for: Reveling in Victory - What's a bruin anyway? edition

I conceived of and started writing Reveling in Victory a few years ago as a celebratory post game recap.  Since we now publish approximately 17 in game and recap threads, it has become redundant, and thus I no longer write it.  Still, something about beating ucla brings out the best ranter in me, so deal with it - I'm writing this irrelevant, nonsensical post.

How to sum up a bruin fan?  There are so many subtle, insipid, naive, vapid character traits, it is hard to sketch a full portrait in limited words.  I shall resort to anecdotes from my walk down from the stadium:

CBKWit: "Dude, Arian Foster is the man!  He killed the Raiders last week."

ucla fan wearing #26 DeShaun Foster jersey: "Yeah, we could have used him today."

CBKWit (To myself): "I can't even make fun of him because he doesn't know enough to get the joke."

CBKWit: "It's ok man, don't feel too bad...you didn't honestly think you were going to win, did you?

ucla fan, hanging his head: "Yeah, I did, we beat Texas."

CBKWit: "You know the last time you won a game here?" 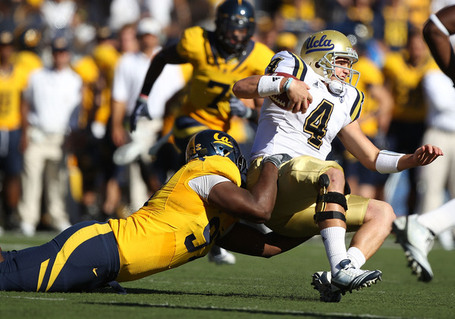 36.  That is the number of home games, excepting those against usc/osu, that Cal has won in a row.  There was lots of hand wringing about oooooo the pistol and ucla beat Texas, but we have not won those 36 in a row by accident.  Simply put, Cal does not lose to mediocre teams at home.  We will even occasionally beat good teams at home (Oregon 06, Tennessee - with Arian Foster - 07, Michigan State 08).  Ucla is not a good team, so I'm not sure why we were so worried about them.

Someday, this streak is going to come to an end.  It's very possible that it ends this year, to either oregon or stanfurd.  We very well could lose both of them, but despite the fact that both teams have looked better than us so far, don't be surprised if we pull at least one of them out.  In the meantime, despite our 28 point win, I'm not expecting a win against sc next week.  We haven't even scored a touchdown against them the last two years, so I remain skeptical about our chances against even a depleted, mediocre trojan team.

After we (probably) lose to sc next week, don't get too down - we'll turn around and beat asu at home.  But don't get too cocky after that, because we'll almost definitely lose to osu on the road.  Cal football: as predictable as Little Italy hitting the upright on his only field goal attempt. 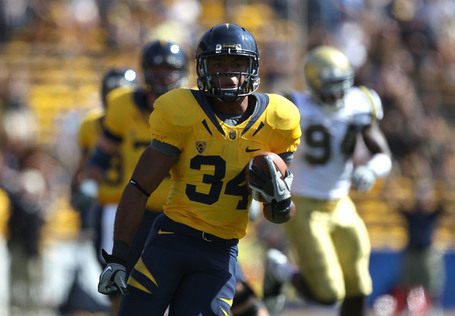 Anyways, this is not the time to kvetch about our upcoming road losses, or our abysmal passing offense.  We beat ucla despite that, and beat them hard.  After Kendricks body slammed their running back for a two yard loss, that game was over.  It was fun to watch our offensive and defensive lines physically dominate the bruins.  It was a joy to watch Kevin Prince run for his life, very reminiscent of the game at Memorial two years ago.

How about that weak-side corner blitz?  Kudos to Pendergast for seeing a weakness on film and exploiting it.  Hagan got two sacks on this play and little Stevie Williams got another one in the fourth quarter.  Williams looks like he'll be a good player - small, but fast and strong.

I thought the roughing the kicker call on Conte was awful - Conte dove for the block, slid on the ground, the punter lands on top of him and somehow that's a personal foul on Conte.  If you need to penalize the defense every time a punter lands on a defender, call it what it is: incidental contact, a 5 yard penalty.

As bad as that call was (and, in my opinion, it was quite bad), it was worth it due to what followed.  Ucla took their free 15 yards, and turned that into a 4th and 27.  Yes, they moved backwards 2 yards and punted again. 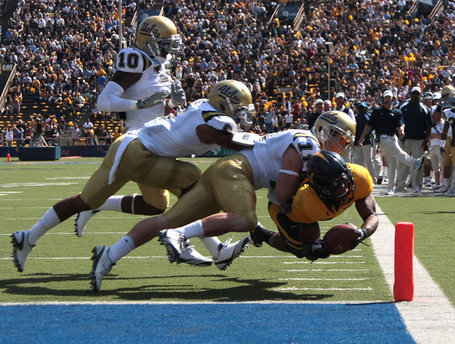 Another satisfying item: the pathetically small ucla crowd.  For as much hubris and naive confidence as bruin fans exhibited leading up to this game, they sure didn't show much faith in their team through their turnout.  Maryland had more fans at Memorial last year, and there are all of 5 Maryland alums living in the bay area.  Half of the ucla crowd left at the nine minute mark of the fourth quarter, including the girl in front of me who actually applauded the ucla band.  By the way, nice impression of the usc band, with all their stupid twirls and faux-dance steps.

It would be fun to throw the ball down field like the good ole days, but it's almost more satisfying to smash the opponent, especially when it's ucla, into oblivion.  Ucla obviously knew that we had no passing attack, yet our second string running back was still able to pick up 6 yards on first down carries.  It must be utterly deflating to be on that defense, knowing almost exactly what was coming and knowing you had very little hope of stopping it.

Ucla had no success running the ball, aside from a 30 yard dash down the sideline in the first quarter.  Whenever they attempted to make a play, regardless of whether or not it was successful, Cal hit them.  DJ Campbell laying out a hapless bruin receiver on an incomplete pass late in the fourth quarter encapsulated the afternoon nicely: you can't do anything, and you're going to get decked for trying.

There weren't too many surprises today.  We knew that Shane Vereen is a beast, that our defense is pretty damn good except against bionic ostriches, and that we beat mediocre teams at home.  Still, even though there may not have been much drama, it was still a damn good time at Memorial.  Beating ucla, though now a frequent occurrence, is always a highly enjoyable event, so revel people.  What's a bruin anyway?