Share All sharing options for: Fantasy Week in Review - Week 5

sec119 makes a dramatic move up the standings with an exceptionally strong week. Will he be able to pull away from here? Find out...after the jump! Well, not really, but do it anyway. 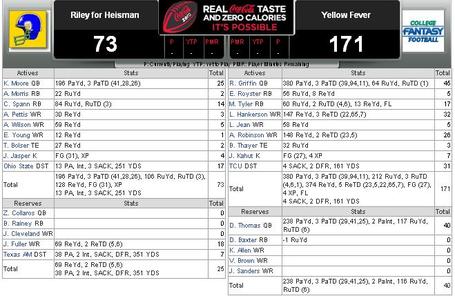 Everyone get on the Robert Griffin bandwagon! Yellow Fever trampled Riley for Heisman 171-73 behind 46 points from Griffin, along with 32 points from Leonard Hankerson and 26 from Aldrick Robinson. 40 points from Darron Thomas on the bench too! Good thing I kept that guy around as a backup instead of Jacory Harris. And Dillon Baxter was summarily dismissed and wished the best in his future endeavors after a -1 rushing yard performance on my bench. Get that weak sauce out of here, son. 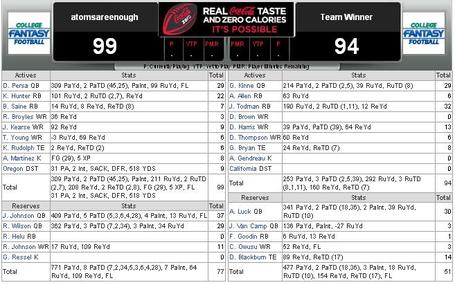 atomsareenough had just enough to get by Team Winner 99-94 behind 29 points from Dan Persa (can you name who he plays for without looking it up? I couldn't.) and 22 from Kendall Hunter. Might have been a good time to go with either Jerrod Johnson or Russell Wilson, both of whom took up residence on the bench. Greg Kinne put up 29 points to match his counterpart, and Jordan Todman had 32 points for Team Winner, but they got nothing from four roster spots, including the California defense. Which was on a bye. 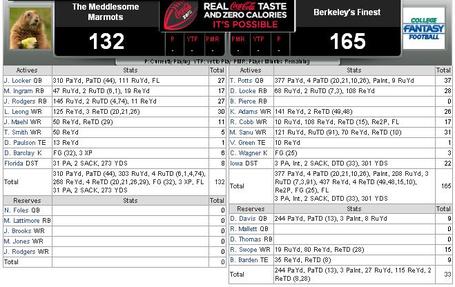 Berkeley's Finest continued its run by defeating The Meddlesome Marmots 165-132 behind 37 from Taylor Potts and 31 from Mohamed "GIVE ME SOME HELP OUT HERE" Sanu. The Marmots were helped along by strong performances from Jake Locker, Mark Ingram, Quizz Rodgers, and Lyle Leong, but the rest of the supporting cast wasn't quite enough in the face of Berkeley's Finest's onslaught.

Followers of Mohamed rolled up the highest point total of the week in defeating Joe Starkey Sucks 182-126. Denard Robinson did his thing and put up 60 points, and Lance Dunbar, Johnathan Franklin, and the Alabama defense all posted 23+ points in support. Matt Barkley continues to scuffle along, and four of Starkey's roster spots combined to put up only 16 points. Which didn't really help. 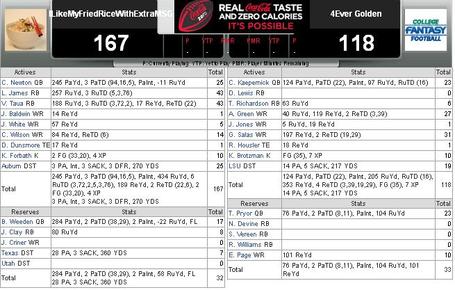 ILikeMyFriendRiceWithMSG defeated 4Ever Golden 167-118 to cap what was undoubtedly a great week for 4Ever Golden, as his fantasy team lost, and he continues to fall in the pick'em standings. Cameron Newton put up 26 points for MSG, and both of his RBs (LaMichael James and Vai Taua) went for 43 points each. That's hard to beat, even when you have two WRs who go for a total of 58 points, if one of your star RBs in Dion Lewis doesn't play at all. It all added up to a deficit that even KAEPERNICK! couldn't make up.
College Fantasy Football - League 2 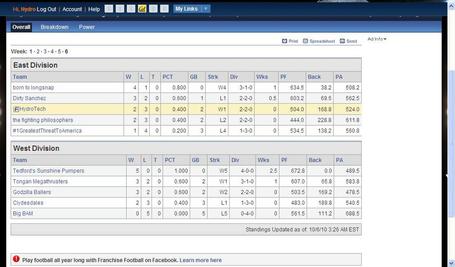 Hydro got off the schneid! I can only assume that was through the usage of more Cover Zero blitzes and zone dogs. 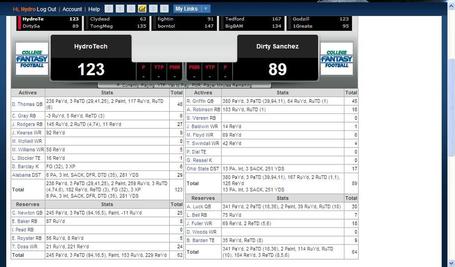 Hydro defeated Dirty Sanchez 123-89 behind the strength of the Pacific Northwest combination of Darron Thomas and Jacquizz Rodgers, as well as the Alabama defense. Those three roster spots combined for more points than the entirety of Dirty Sanchez's team, despite 46 points from Robert Griffin. Clearly, that was because three players on his team were on a bye. 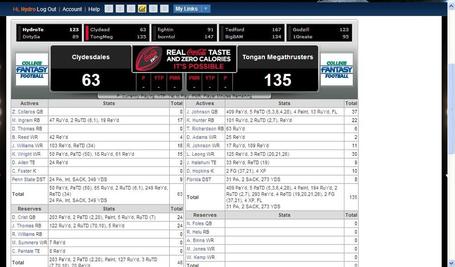 The Tongan Megathrusters more than doubled up Clydesdales 135-63 in beating them like the horses they are with 37 points from Jerrod Johnson (even with his five turnovers), 22 from Kendall Hunter, and a strong game from Lyle Leong. Clydesdales got 17 points from Mark Ingram...and that's about it. 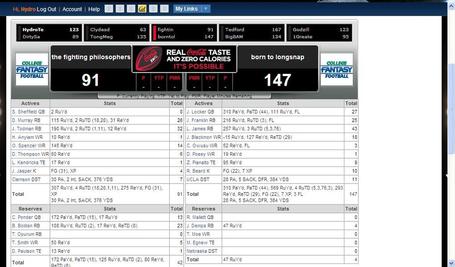 born to longsnap thumped the fighting philosophers 147-91 in a battle which proves capitalization is overrated. born to longsnap rode the combination of Jake Locker, Johnathan Franklin, LaMichael James and Justin Blackmon past 58 points from DeMarco Murray and Jordan Todman. It helps that their QB compiled a total of two rushing yards. 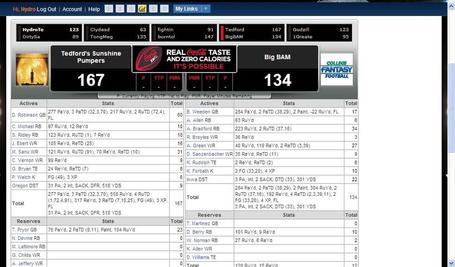 Big BAM continues its march to ignominy, losing to Tedford's Sunshine Pumpers 167-134 in spite of strong efforts from Brandon Weeden, Allen Bradford, A.J. Green, and the Iowa defense. The problem was that she was going up against the demigod known as Denard Robinson, and He was supported by Mohamed "PLEASE SOMEONE HELP ME" Sanu, so that's really kind of hard to overcome. 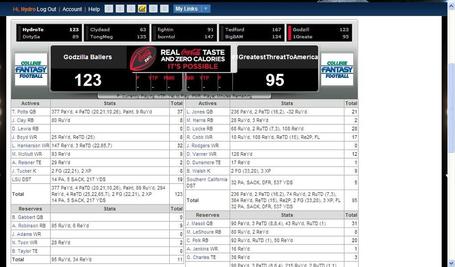 Godzilla Ballers proved that they are indeed the biggest threat to America in beating the #1GreatestThreatToAmerica 123-95 with strong efforts from Taylor Potts and Leonard Hankerson. Greatest Threat received 66 points from Landry Jones, Derrick Locke, and Randall Cobb, but not much else to go along with that.