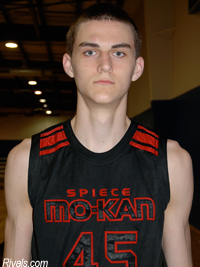 Eric Bossi of Rivals tweets Kravish will be Mike Montgomery's first recruit for the 2011 class. With Juan Anderson heading to Marquette, Kravish will likely be the primary big man signing for this class. He picked the Bears over Iowa.

Kravish saw his recruiting stock explode with an exceptional performance during the NY2LASports.com Summer Jam tournament this past July and high major programs from coast to coast jumped on his trail after that.  This could be a steal for the Bears as Kravish has nice size, good length, solid athleticism, above average instincts, and decent skill package with lots of room to grow and improve in the coming years.

Kravish is a three star on Rivals, is ranked as the 41st best center and a three star by ESPN. ESPN has their evaluation of Kravish.

He has a good touch on his free throw stroke and can knock down the high post jump shot in the flow of the offense. David is difficult to score over because he easily challenges shots. With added weight he'll be a good addition to a D-I roster.

No single player may have improved his stock more with his performance at either event than this long athletic skilled interior talent.  Showed excellent instincts, was active on the glass, hit the perimeter shot, and finished around the basket with solid bounce as well.  Led his team to the final four of the Summer Jam before falling to the Atlanta Celtics and was strong during the process.  Excellent showing.

KC Prep Hoops rates him the third best player from the Kansas City area. He's on the 4th best team on the Missouri side of Kansas City.

At 6’9", Kravish was raw as a sophomore but has greatly improved over the summer with markedly better feet and ability to post-finish around the basket. He still is thin-framed but can run and jump, and he should be primed for a big season, especially as the Broncos welcome 6’8" frosh Tory Miller as a bookend in the lineup. Schools such as Iowa State are now on his trail.

He also gets it done in the classroom.

Kravish is the son of Dave and Debbie Kravish. He plays basketball for the school and is an honor student. Carolyn McKnight said the Scholastic Achievement award is given in recognition of the student’s devotion to attaining a high scholastic level while participating in activities which develop good citizenship.