This is the first of a three part series with Samsung Enhanced Content which will break down the relationship between technology and sports. Today we break down a pretty good play from the Cal-Arizona State game.

Back in the old days when we all had CRT TVs and our eyes went bad and started bleeding, I would never have been able to understand what went down in a football play. Instead of enjoying the process, I was always interested in the outcome of the play. Things were moving too fast and it was impossible to figure out what happened at the heart of the game. Running plays were impossible to diagnose because you had to keep track of an offensive line in motion. And it's still not that easy to figure out what's going on in a passing play unless you're in the stadium and get the wide view of what's going on in the game.

Nevertheless, things have improved monumentally today. Thanks to the Internet age, where games can be TiVo'ed, rewatched, recorded, captured, and broken down by any Joe Six-Pack out there like myself, we can gain a more cerebral and intelligent understanding of the game without resorting to cliches and misconceptions. One such example is how it helped me understand the beautiful specimen of football excellence that is Shane Vereen. 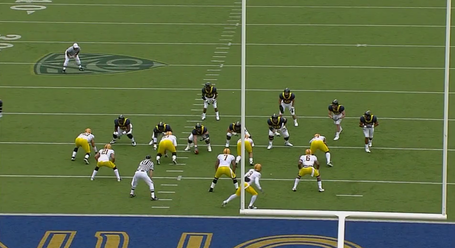 Cal has first and five at the eight, with 2:18 left in the first quarter, game tied at 3. Bears line up in Wildcat, Riley is wide to the left, Keenan Allen wide to the right. Vereen is ready to take the direct snap, Stevens is to his left. Arizona State is to his right.

Vereen claps for the snap. You see the left guard Brian Schwenke pulling to his right, while the center Chris Guarnero takes on #50 and Justin Cheadle takes on his counterpart #61. #50 gets a good jump on Guarnero.

Already by the time Vereen receives the handoff, #50 is bearing down on him. Donovan Edwards comes over to help Cheadle block #61 a little before heading downfield, most likely to find Vontaze Burfict (#7).

Eric Stevens comes over to help block out #50 to help keep Vereen from getting blown up in the backfield. Schwenke also gets the outside position on #92, which is very critical on this play.

Burfict speeds past Edwards though. This causes a problem for Vereen, as you'll see on the next two images.

Take a look at the way Cheadle, Schwenke, and Mitchell Schwartz are blocking (the three guys who had no trouble executing their blocks on this play)--feet and face aimed at the sideline, isolating the defenders from the side of the field the tailback is rushing towards. This is an example of classic outside zone blocking, something I'll hopefully talk more about at a future date.

You'll see Vereen has two big problems on his side of the field--two unblocked Sun Devils defenders on the outside. If it was just #21 Vereen had to deal with, Shane will probably try and chance it to the outside and try to get the edge. With TWO defenders, especially the speedy Burfict freed, it'll be impossible to get the angle toward the end zone this way and he'll probably get stuck for no gain.

No problem, says Mr. Vereen. I'll bump it back to the inside. Uh-oh.

You probably already see the huge error #21 and #7 commit. BOTH OF THEM rush toward the inside. That's not their responsibility here. They're supposed to stay outside and maintain contain, or at least one of them should have kept watch on the outside gap (probably Burfict is more at fault for being overaggressive, especially since he sees #21 bite in). But it's a big error in run defense.

And Shane makes them pay.

Both Edwards (who had to chase back after not getting to Burfict) and Anthony Miller (who dealt with the linebacker on his side) comeback to seal the edge. An okay blocking down by the offensive linemen is salvaged, all thanks to Shane.

Now there's no frontside contain, and Vereen has the end zone in his tracks.

Allen had a nice block here, although it didn't really have any impact on the play. Good to see him being aggressive though and not taking any chances of a defender pursuing and taking Vereen down from behind.

I wouldn't be surprised if Vereen had studied the gametape and recognized Arizona State's defensive unit is very undisciplined, particularly Burfict. If you make them bite, you. It's the equivalent of a pump-fake in the running game.

It was an excellent move and run by Vereen and good blocking by Stevens, Schwenke and Cheadle that made this play. 10-3 Cal, and the Golden Bears never look back.