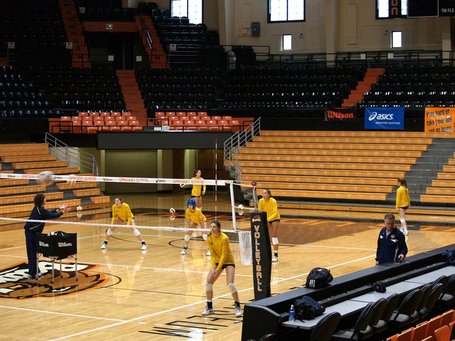 via sphotos.ak.fbcdn.net (via Cal Volleyball Facebook). The Cal ladies getting prepared at Gill Coliseum.

Cal overcame a tough night for Tarrah Murrey with strong support from her teammates and good defense to overwhelm the Beavers and win in straight sets, 28-26, 25-22, 25-19. The Bears staved off several set points in the first set and Murrey managed to knock down the decisive kill, and then slowly but surely were able to win each successive set.

Murrey finished with 14 kills, but committed seven errors and finished with only a meek .156 attack percentage. It did look like the Beaver defense was sagging to deal with Murrey, which probably could have frustrated her performance, but it was still an uncharacteristic performance from the Cal outside hitter.

Her teammates though stepped up to the plate in a big way. Correy Johnson had five kills in the first set and finished with ten overall. Kat Brown stepped up with five kills in the second set and finished with nine of her own. Adrienne Gehan added seven kills of her own, and even Carli Lloyd got in on the hitting action with six kills to go along with her 34 assists. The Bears had two block solos and 18 block assists, and took advantage of 23 errors by the Beavers to grind out the win.

Cal's next game is Saturday night against #18 Oregon. The game will not be streamed for free, but we will try and keep you up-to-date on the happenings in Eugene tomorrow night. GO BEARS!

Fresh off their victory against the Furd in the Big Spike, the Bears look to improve on the best ranking in program history with wins against the Oregon schools. CalBears.com has a comprehensive preview of both games.

The Beavers (8-15, 1-8 Pac-10) enter the weekend on a seven-match losing streak that includes a sweep at the hands of the Bears. When the teams met at Haas Pavilion on Oct. 2, Cal blanked Oregon State, 25-21, 25-18, 25-18, to push its all-time record against the Beavers to 40-17. The Bears have won nine straight against OSU. While the Bears lead the Pac-10 in blocking (3.08 bps), the Beavers are second with 2.68 bps. Freshman middle blocker Mona Kressl ranks fourth in the conference with 1.16 bps. Sophomore middle Ashley Eneliko is ninth in the league with 1.06 bps. Offensively, Oregon State is led by senior outside hitter Jill Sawatzky, who averages 3.84 kills per set (4.49 pps) and is tied for the team lead with 22 service aces this season. As a team, the Beavers rank third in the Pac-10 for aces with 1.46 saps. Freshman libero Becky Defoe is the team leader for digs with 2.96 dps and sophomore setter Megan McBride ranks 10th in the conference with 8.68 assists per set.