Share All sharing options for: Fantasy Week in Review - Week 8

we had this conversation last year

I'm a rare thing on the internet...yes a female. You're all being chicked!

Not a whole lot of lopsided picking/results this week.

Man, my lockdown defense is really keeping things together for me. 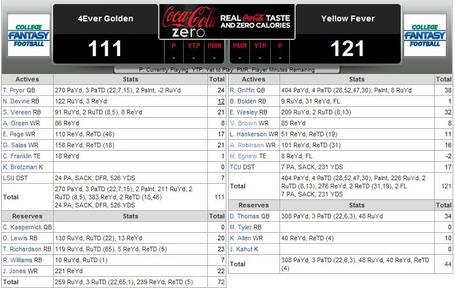 Yellow Fever returned to its winning ways in defeating 4ever Golden by a count of 121-111 behind the majesty of Robert Griffin and hard-nosed running of Ed Wesley. Which nicely offset the first touchdown given up by the TCU defense in the month of October. 4ever Golden got a nice effort from the Submarine, but blowing out the Sun Devils isn't conducive to putting up monster stats in Berkeley. 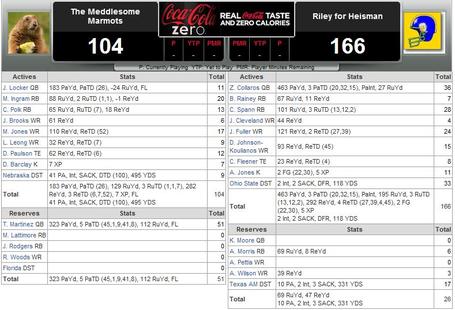 Riley for Heisman steamrolled the Meddlesome Marmots to the tune of 166-104...an outcome not entirely unwarranted, given that the Meddlesome Marmots benched Taylor Martinez and his 51 points in favor of Jake Locker and his mom.  It wouldn't have made the difference, but it would have made things a lot closer against Zack Collaros, the Ohio State defense, and company. 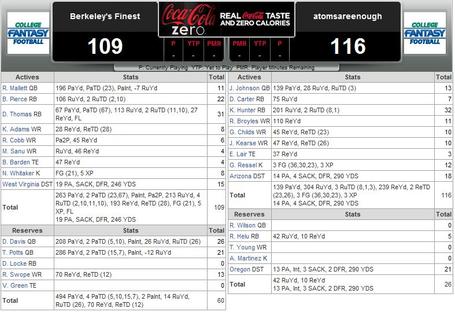 atomsareenough had just enough against Berkeley's Finest, winning 116-109 behind Kendall Hunter and a well-rounded effort from the team's supporting cast. Bernard Pierce and Daniel Thomas led the way for Berkeley's Finest, but subpar efforts from all of the teams pass catchers meant the team didn't have quite enough to get over the top. 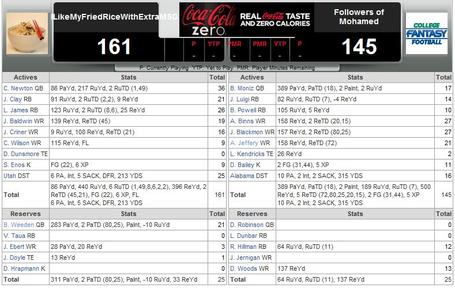 The week's highest scoring matchup saw ILikeMyFriedRiceWithExtraMSG get by the Followers of Mohamed 161-145. MSG rode Heisman frontrunner Cam Newton for 36 points and was boosted by 26 points from presumed Heisman runner-up LaMichael James (doesn't seem fair, does it?) as Jonathan Baldwin finally woke up for the Pitt Panthers. Meanwhile, Mohamed had three wide receivers go for 21 points each, but was let down by 2 points from Lance Kendricks and mediocre performances from its QB and RBs. 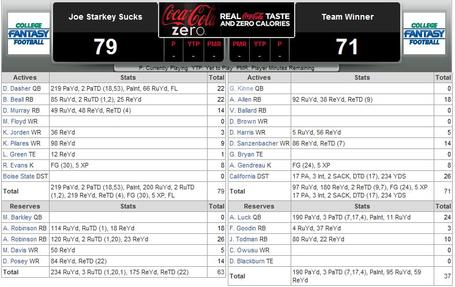 The pillowfight of the week featured Joe Starkey Sucks barely getting by Team Winner 79-71, despite Team Winner starting four guys on their bye. I don't really want to discuss this any more.

And to think Hydro was oh-so-close to finally reaching bowl eligibility by getting to that .500 mark. 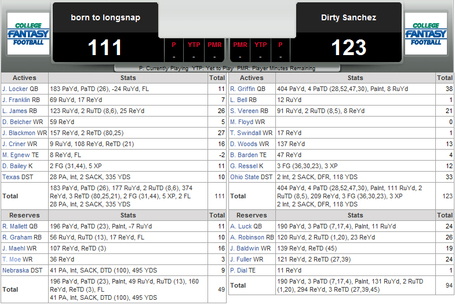 Dirty Sanchez also rode the Robert Griffin train to victory, winning 123-111 over Jake Locker and born to longsnap. Griffin was backed up by the Ohio State defense and the Submarine, who managed to overcome a total of 12 rushing yards and 0 points from their other RB and number one receiver, while born to longsnap was hamstrung by poor performances from Jake Locker and his backup, Ryan Mallett. 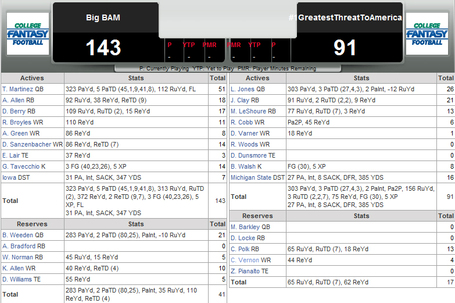 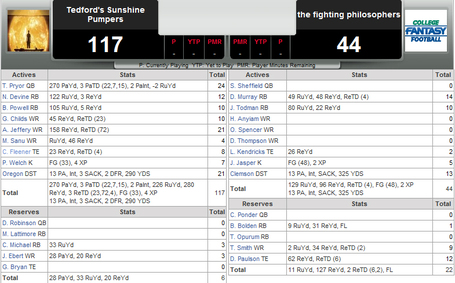 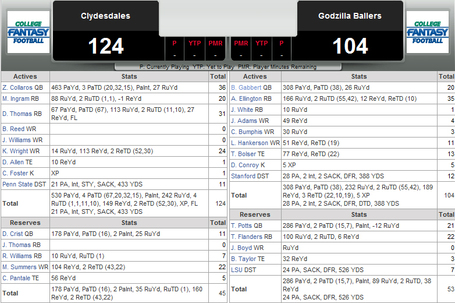 Godzilla Ballers fell 124-104 to Clydesdales, who won on the strength of 87 combined points from the backfield combination of Zack Collaros, Mark Ingram, and Daniel Thomas. Godzilla Ballers did get a huge performance from Andre Ellington, but precious little from its remaining backs or receivers. 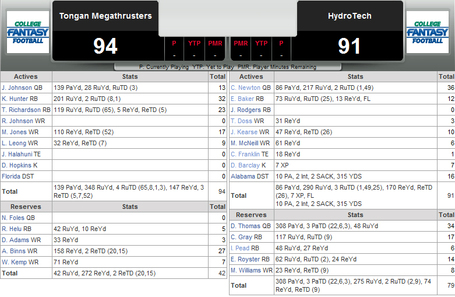 The Tongan Megathrusters just thrusted by HydroTech 94-91...although you can kinda blame Hydro for this since he had Quizz active on his bye week. Come on, man!