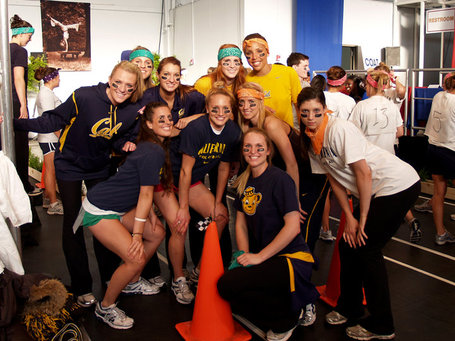 via sphotos.ak.fbcdn.net (Image before Toe-to-Toe fundraiser from last spring)

The Cal women's volleyball squad lost the opening set to the Cardinal 25-21, and then swept the next three sets, winning 25-16, 25-22, 25-16. Carli Lloyd netted 52 assists; Tarrah Murrey put up 21 kills and 12 digs, and she had plenty of support. Shannon Hawari put up 11 kills, Adrienne Gehan with 10 kills, Kat Brown put up 9 kills, and Correy Johnson added 8 kills. Murrey dominated the second and third sets with 8 and 6 kills apiece, Brown and Hawari combined for 7 kills in the third set, and Lloyd had 42 assists in the final three sets. One volleyball expert at the game had this comment.

They played better in virtually every category. Their floor defense was outstanding and Carli's quick sets kept the Stanford block from closing.

Cal now improves to 18-1 in the Pac-10, and now has the inside track to win the conference. GO BEARS!