Share All sharing options for: Fantasy Week in Review - Week 7

Maybe this thing really is going to right down to the wire. Trends and info after the jump.

Riley for Heisman really needs to tighten up on D there. What's up with that? 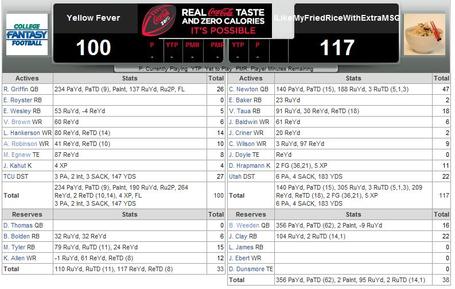 Yellow Fever got Cameron Newtoned to the tune of 117-100 behind 47 points from the aforementioned Newton, and Robert Griffin was unable to keep up. And then of course, I apparently forgot Evan Royster was on a bye. Not like he would have helped much, I imagine. 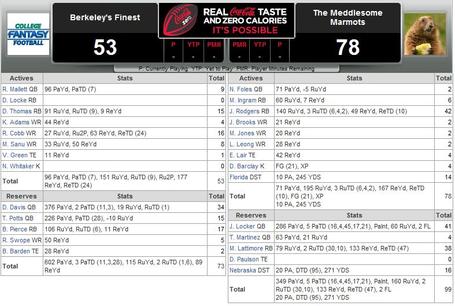 The Pillowfight of the Week featured the Meddlesome Marmots defeating Berkeley's Finest (which seems very apt given last week's performance 78-53 almost entirely due to the performance of Jacquizz Rodgers, and to a lesser extent, the Florida defense. Might have been a good time to play either Jake Locker and/or Marcus Lattimore, although it's not like either was necessary this week. 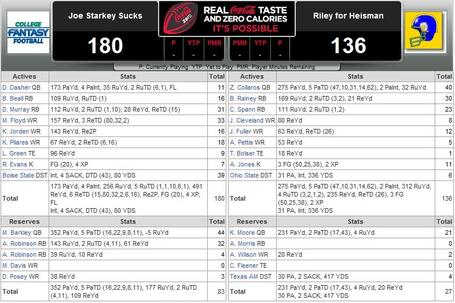 Joe Starkey Sucks trampled Riley for Heisman 180-136 on the strength of a balanced attack with Dwight Dasher, DeMacro Murray, Malcolm Floyd, and the Boise State defense, in offsetting superlative performances from Zack Collaros and his two running backs. 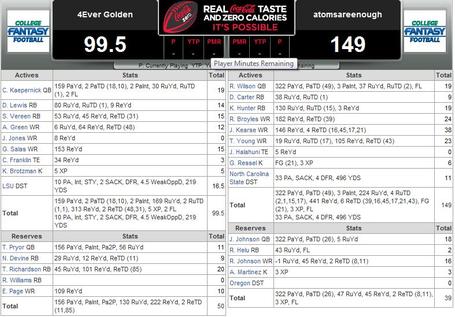 atomsareenough dropped the hammer on 4ever Golden by a count of 149-99.5, behind Russell Wilson, Jermaine Kearse, and Ryan Broyles, while the power of Colin Kaepernick was not enough to offset a meager 8 receiving yards from Julio Jones. 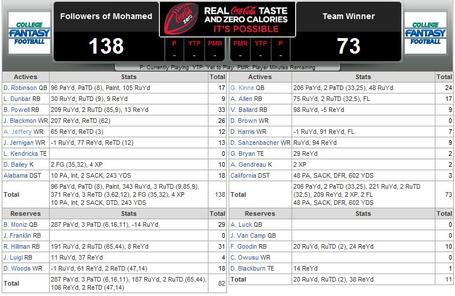 Followers of Mohamed trampled Team Winner 138-73, even as the power of Denard Robinson seems to be waning. Brandon Powell and Justin Blackmon picked up the slack though, and that was more than enough to fight off Greg Kinne and Anthony Allen.

Look at Hydro making a charge up the standings!  Though that points for total is kinda weak there.  Time to go to the Blur offense. 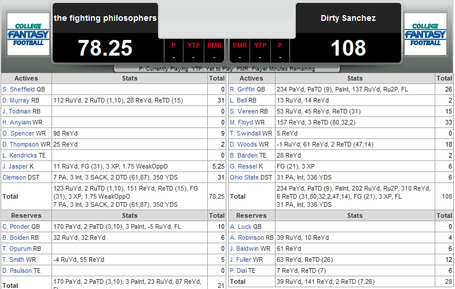 Dirty Sanchez defeated the fighting philosophers in a surprisingly competitive matchup, which was really only competitive because of terrific performances from DeMarco Murray and the Clemson defense, which almost made it semi-competitive (but not really) against Robert Griffin, Shane Vereen, and Malcolm Floyd. 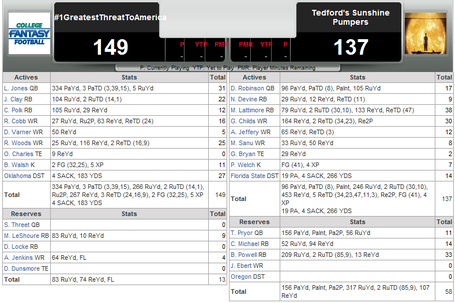 The highest scoring matchup in League 2 of the week saw the #1GreatestThreatToAmerica against Tedford's Sunshine Pumpers 149-137 by riding Landry Jones, Randall Cobb, Robert Woods, and the Oklahoma defense against Denard Robinson, Marcus Lattimore, and Greg Childs.  I'd have expected Noel Devine to do better, but them's the breaks. 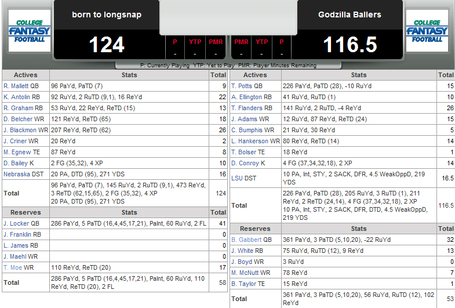 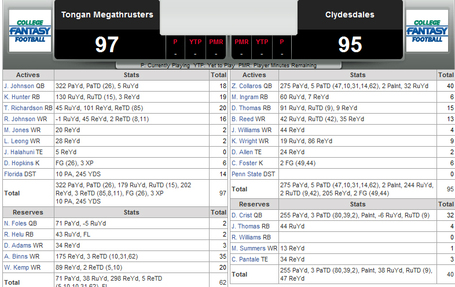 The absolute closest matchup of the week saw the Tongan Megathrusters slip by Clydesdales 97-95 behind reasonable performances from Jerrod Johnson, Kendall Hunter, Trent Richardson, and Ronald Johnson to get by Zack Collaros and Daniel Thomas. 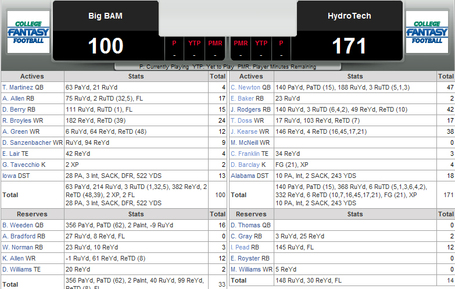 HydroTech absolutely hammered Big BAM 171-100. Back on the schneid, Scootie!