Glass half-full review: Nearly took down a Wisconsin squad in Camp Randall that just knocked off #1 Ohio State with relative ease. They put up the most impressive fight all season against Pac-10 favorites Oregon, engaging in an offensive duel that left the desert sizzling. They went into Washington and shut down Jake Locker and the Husky offense that took down USC. The Airraid offense has resurrected Michigan transfer Steven Threet right along with the Arizona State passing attack, as they've averaged almost exactly 300 yards a game.

Glass half-empty review: This team kills itself. The Devils rank 108th in penalties and 115th in penalty yards. They still allow too many sacks (17 this season) and don't convert their copious red zone opportunities (32 trips, 10 no-shows, only 15 touchdowns). Most costly are the fourteen turnovers and the -1.17 turnover margin, putting them near the bottom of all FBS squads. Cory Williams of House of Sparky mentions this as the biggest impediment to victory on Saturday.

The Sun Devils must hold onto the ball with both hands, as this team is taught to strip the ball. Threet must make sure he finds the open man before he is sacked, as the Bears have racked up 17 on the season.

It's simple, really. Execute the offense and avoid dumb penalties on defense. Take the crowd out of the game and keep it that way. Deliver on the promise of quality football and the Bears can be beat, even in Berkeley.

I've said all I need to say about the Airraid here. I'm guessing the Territorial Cup will be like watching Hal Mumme's mirror.

Many of you probably weren't predicting ASU would conduct the best offense in all of Arizona, but the Sun Devils are definitely putting up a fight. Their run and passing attack are working quite fluently, ranking fourth in the conference in total yards and second in passing yards (barely trailing Arizona).

Steven Threet has shown he can be the man in Tempe. He led the Devils on what should have been a game-tying fourth quarter drive in Madison (until they missed the extra point, DOH). He battled Darron Thomas for most of the Oregon game and out-dueled Jake Locker in Washington. Pitchfork Nation with more on the Washington performance.

Threet finished 21 of 34 for 288 yards and 2 touchdowns, while only throwing one pick. At least six of his 13 incompletions were dropped passes, meaning Threet should have been about 27 for 34. Threet didn’t make many bad decisions on Saturday, and it led to a win. This was an encouraging performance by #14.

Junior Mike Willie was Threet’s primary target against UW with five catches, 96 yards and a key touchdown snare. Even redshirt junior A.J. Pickens got in the act, catching two passes on a critical, game-changing, late-second quarter drive. Eleven ASU receivers have catches on the season. With Willie and junior Gerell Robinson, the Sun Devils have two legitimate big targets.

But Threet has a huge problem--he turns over the ball. A lot. He has as many touchdowns as interceptions (11), SIX in the fourth quarter. His performance ability also seems to erode progressively after the first half.

Although he tempered those mistakes in Seattle, it is something to watch out for on Saturday. Cal has proven they can be feisty on defense, and they've been pretty dominant at home.

The run game, once moribund, has flashed some sparks. ASU has the two-back system in place, picking up a modest 150+ yards a game on the ground. Neither promising freshman Deantre Lewis or sophomore speedster Cameron Marshall run the ball great, but they pick up yards and can keep defenses honest (similar to the way Nic Grigsby and Keoala Antolin do business down the road in Tucson). Lewis can also come out of the backfield and catch--he's Threet's third favorite target.

However, as they've move deeper into conference season, they've been getting stopped more and more. (Number in parentheses indicates FBS run defense rank.)

It's utterly baffling to me how the Sun Devils run game can regress against progressively WORSE defenses. Perhaps they play up (or down) to the level of their competition. Some of it might have to do with their offensive line, which is somewhat like Cal's--improving, but still slightly unsteady. The positions in deepest flux are at the tackle positions, and they'll need to perform very well on Saturday. Hod Rabino of Fox Sports Arizona with the story.

Offensive tackle Evan Finkenberg replaced the injured Dan Knapp at left tackle a few weeks ago. Now that Knapp is fully healthy he finds himself shifting over to the right tackle position where he is engaged in a close battle with JC transfer Aderious Simmons who has been improving as of late.

For the first time this season, I can clearly state Bryan Anger won't be the best punter on the field. Trevor Hankins is averaging 48.5 yards/punt, second in the nation and top-ten overall. Thomas Weber was lights out in 2007/2008. Since then he's been inconsistent, only nailing 12 of 21 field goals since a groin injury sidelined him for part of last season, including missing that crucial extra point against Wisconsin. Punt returner Jamal Miles inspires the "mehs"; his eleven yards per return is about on the same level as Jeremy Ross. Kyle Middlebrooks and Omar Bolden had an impressive explosion at Wisconsin, but they've quieted down since then.

They're not quite as good as they were last season, but they have their moments. Defensive coordinator/linebackers coach Bill Miller continues to remain dedicated to stopping the run, and he's put up some impressive performances (Number in parentheses indicates FBS run offense rank).

The Oregon performance particularly stands out. Containing LaMichael James and Darron Thomas to under 130 yards is an impressive feat. But what also stands out is how much better the Sun Devil run defense appears to be at home. They let Jacquizz Rodgers run all over them in Corvallis, and although the Badgers and Huskies had to grind harder to get their yards. 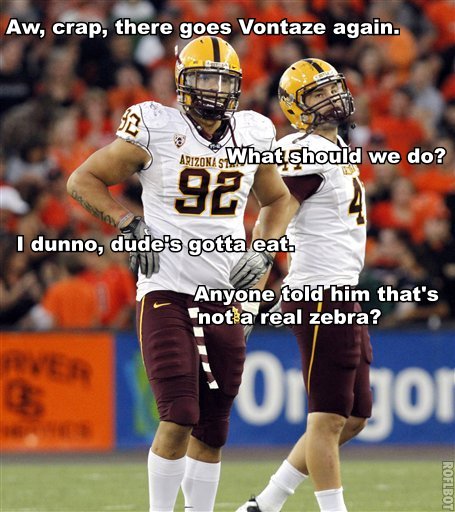 The front seven is anchored by Vontaze Burfict; with 45 tackles, 14 tackles for loss, three passes broken up, a forced fumble, and eight decapitations. Brandon Magee will also be returning after missing the Washington game, so the two best Arizona State linebackers will be on the field and should be leading a unit that misses Dexter Davis and the departures of Mike Nixon and Travis Goethel.

However, while the run defense still looks plenty solid, the pass defense has had their struggles. Other than stepping up and containing Locker, they've had their troubles. (Number in parentheses indicates FBS pass efficiency offense rank)

With ASU's focus on stopping the run, the lack of takeaways hurts them. Kevin Riley torched the Sun Devils for 350 yards and two touchdowns last season, including a game-winning drive at the end of the game (he actually led Cal down the field twice in the fourth quarter). If the Devils stop the run, can they keep the pass from opening up?