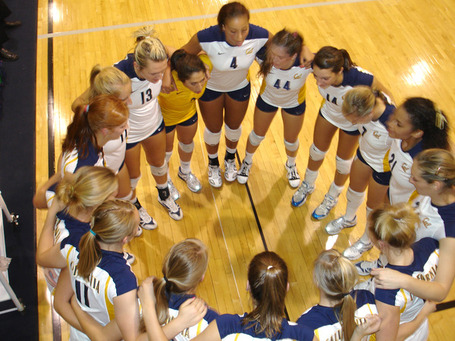 The Bears overcame a slow start to beat the Cougars three sets to one. They nearly lost the first set after trailing 24-21 before Tarrah Murrey turned it up and hit three kills, scoring the final five points and winning 26-24. The Cougars came right back though, winning the second set 25-21 and very much looking like Cal's equal through the first two sets.

But the final two sets were all Bears, winning them 25-15 and 25-8. Cal turned the defense up and the Cougars looked like a team that remained winless, committing numerous errors and taking them out of the match. Murrey finished with 20 kills, but she did most of her damage early. Carli Lloyd was the star with 45 assists, 8 digs, 8 kills for a 73% kill percentage, 3 block assists and a block. Kat Brown was a huge contributor with 6 block assists, 2 blocks, and 11 kills for a 63% kill percentage. Erin Freeman and Robin Rostratter also had 28 digs, and Adrienne Gehan, Correy Johnson and Shannon Hawari rebounded from a rough start to shut the door on the Washington State upset bid.

#7 Washington awaits tomorrow, and it's possible Cal was looking ahead to this huge matchup. It's going to be a big game!

The Bears try to rebound from their first loss of the season (a brutal five-setter to USC) with home games at Haas Pavilion against the Washington schools, including a Saturday night matchup with the #7 Huskies. From CalBears.com.

The Golden Bears are looking to bounce back after suffering their first loss of the season. The California volleyball team tore through the first 15 matches on its schedule to secure the second-longest winning streak and the second-best start to a season in program history. With the pressure of maintaining that streak behind them, the Bears look to hold down a struggling Washington State squad and derail the efforts of a Washington team that is on its own three-match winning streak since enduring its only defeat of the year. Wins and losses aside, Cal has maintained its perch atop the conference standings thanks to the accuracy of senior setter Carli Lloyd, who ranks 14th in the country in assists (11.45 aps) and the offensive efficiency of junior outside hitter Tarah Murrey, who averages 5.17 kps with a .374 hitting percentage. The Bear block came alive last weekend on a trip to Southern California as the team put up 17.0 blocks in each match against UCLA and USC. Sophomore middle hitter Kat Brown logged the first 10-block match in a four-set win against UCLA since middle hitter Ellen Orchard did it on Oct. 27. 2007.

The ladies are in pink for tonight's Dig for the Cure match. The Bears support Breast Cancer Awareness. http://twitpic.com/2xxhpx