Share All sharing options for: Fantasy Week in Review: Week 6

4ever Golden recovers from his disastrous week to move back into first, but sec119 is starting to separate himself from the rest of the pack! More after the jump.

I have no explanation for why my opponents have scored so few points, but I'm lovin' it. 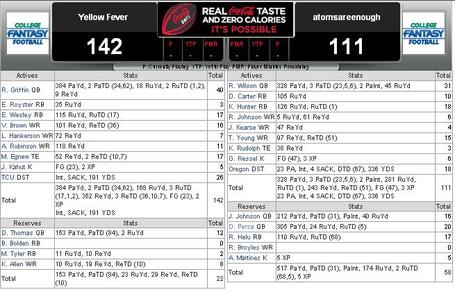 I beat the living tar out of atoms, as Yellow Fever defeated atomsareenough by a count of 142-111 behind Robert Griffin and the TCU defense. Evan Royster continues to make a case to get dropped and Leonard Hankerson failed to find the end zone as Jacory Harris continues to evoke memories of the Brock Berlin era, but that was enough to defeat Russell Wilson and Kendall Hunter, who led atoms' team. 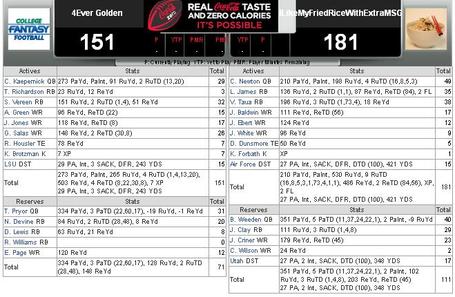 ILikeMyFriedRiceWithMSG ran up the highest point total of the week in defeating 4Ever Golden 181-151, as MSG's three-headed Heisman candidate monster trio of Cameron Newton, LaMichael James, and Vai Taua put up 124 points between them, or nearly enough to beat half the teams in the league this one week by themselves. Shane Vereen and Colin Kaepernick put up valiant efforts, but Trent Richardson failed to the tune of 3 points for the week. 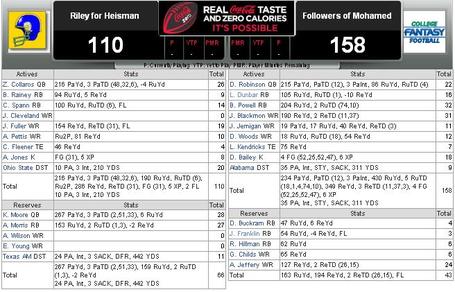 The Denard Robinson train hit its first (relative) speed bump this season, but Followers of Mohamed still had enough to beat Riley for Heisman 158-110, with Bernard Powell, Justin Blackmon, and Robinson combining for 85 points to counter a 26 point effort from Zach Collaros, who didn't get enough help. 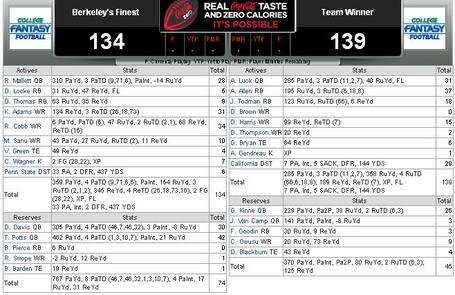 The closest matchup of the week saw Team Winner beat Berkeley's Finest 139-134, as Team Winner needed everything he got out of Andrew Luck, Armando Allen, and the California defense to hold off Ryan Mallett, Kris Adams, and Randall Cobb.  Everyone else on both teams kinda sucked. 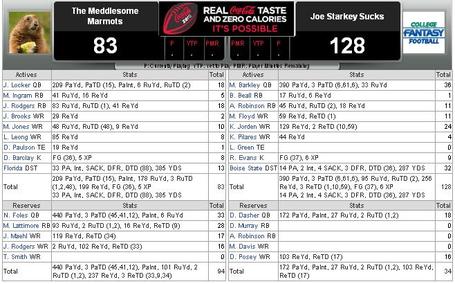 The Meddlesome Marmots sucked it this week, as they lost 128-83 to Joe Starkey Sucks. High on the list of underachievers were purported Heisman candidates Jake Locker and Mark Ingram, while Starkey got decent performances out of Matt Barkley, Kamar Jorden, and the Boise State defense. 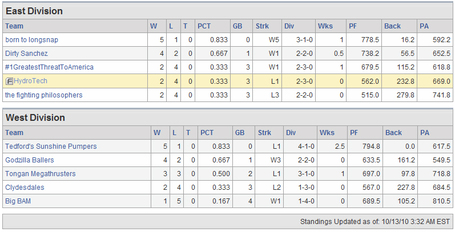 BIG BAM GOT OFF THE SCHNEID! 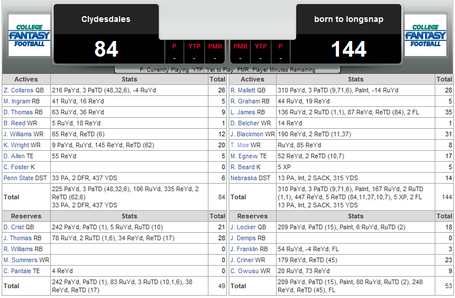 born to longsnap put a beatdown on Clydesdales 144-84 by riding LaMichael James, Ryan Mallett, and Justin Blackmon, while Clydesdales got a reasonable performance out of Zach Collaros. But that's about it. 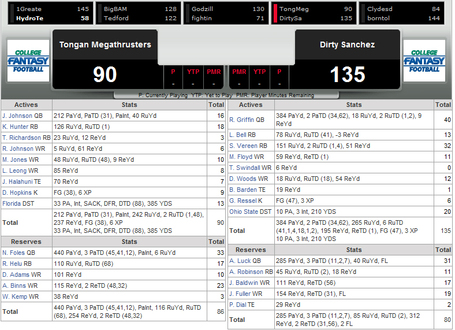 Dirty Sanchez used the might of Robert Griffin to cruise by the Tongan Megathrusters 135-90, the Megathrusters got a whole bunch of nondescript performances in coming up short. Should get bonus points for the Marvin Jones reverse, though! 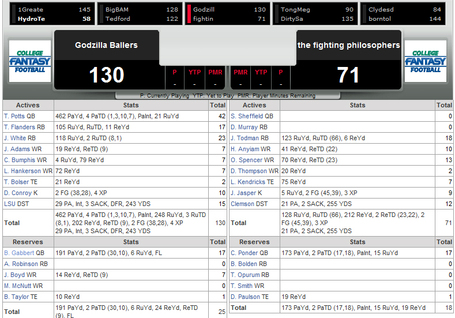 Man, a whole lot of teams in league 2 really sucked this week, as the fighting philosophers continue to not update their team in losing 130-71 to Godzilla Ballers. Let's just move on. 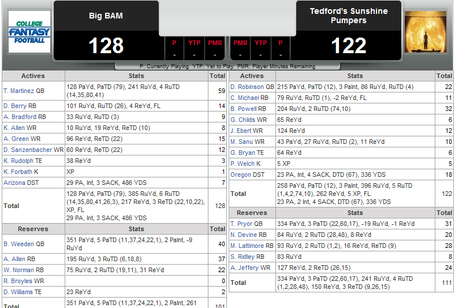 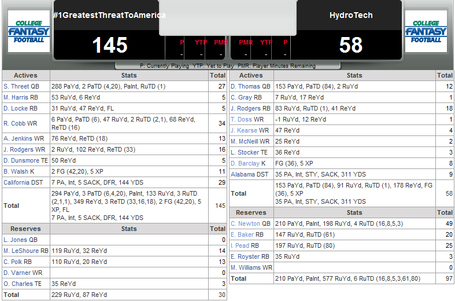 Hydro, this was truly an abysmal performance. Explain yourself. I can't do it for you. First, how about we put Darron Thomas away and stick with Cameron Newton? Amazingly...he would have won if he optimized his lineup. Look at that bench!