To see the first half passing game, click here.

Cal fans have jumped all over the fact that Jeff Tedford was very harsh on Kevin Riley after the UCLA contest.

Despite the bite of those comments, I kind of feel people are reading more into it than we probably should. We're nowhere close to seeing Beau Sweeney enter the picture, and we shouldn't be.  I'm guessing these were the frustrations of a head coach who hadn't reviewed the gametape, who didn't see some of the things that clearly prevented the Golden Bears passing attack from getting going. Notice how he toned down things in his Monday report.

Tedford said offensive coordinator and quarterbacks coach Andy Ludwig spoke with quarterback Kevin Riley to talk about his footwork. After the game, Riley said his footwork wasn’t where it needed to be.

"A lot of things start with your feet," Tedford said. "If your feet are out of whack, that can sometimes make you a little high with the ball. The good thing is we’re not making poor decisions turning the football over."

When I rewatched the gametape, indeed, Riley's footwork did seem to be a little messy at times, and the main hinderance to opening up the passing attack. I emphasized before the season his footwork would have to make major leaps, and although it's improved, there's still plenty of more tinkering and fixing that could be done. 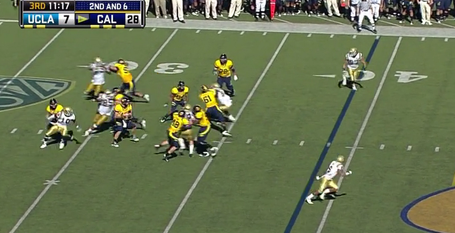 I-formation set, tight end to the right, fullback strong position. UCLA in a 4-3 over, with Ayers on Miller.

This is a dead play because #85 David Carter gets by Dominic Galas at the snap and Galas is forced to hold him (Vereen also doesn't recognize Galas has been beaten and doesn't provide as much help in pass pro.Riley does a good job escaping the pressure and stepping into the pocket. He doesn't make a good decision as he tries to leap while throwing to find Keenan Allen on the crossing route down the sideline. Not an easy throw to make, not a throw I want to see Riley attempt that much. I would've preferred if he took off and ran with the ball with only a single linebacker in front of him. He would've picked up the first down easily.

Empty set, UCLA in nickel formation. This actually looks like a good throw by Riley, but his receiver seems to screw it up. He targets Lagemann on the in route. Lagemann does a little stutter step, turns inside, but it also looks like he slows down as the throw is coming rather than moving in stride down the middle. Either Riley delivered that ball to the wrong place or Loggy was in the wrong place on his route, and Dye nearly makes what could've been a game-turning interception.

Something went wrong here. All the routes here look pretty lazy, or UCLA does a good job defending everything.

Vereen in the backfield, Miller and Loggy to the right, Jones and Allen to the left, with Allen coming in motion to the right. Illegal formation kills this play--all the wideouts are lined well behind the LoS. Probably on Riley for not recognizing there aren't enough men at the line of scrimmage.  UCLA in the nickel.

Downfield, there's good rotation by the Bruins defenders to pick up Vereen, Miller, and Lagemann. David Carter makes a real athletic move to break off the grasp of left guard Brian Schwenke,  then circle all the way to around the right tackle Donovan Edwards, who was busy trying to contain the defensive end. Edwards does a nice job taking Carter out of the play, but the pressure from the right side forces Riley to roll out. Riley airs it out for Allen, but again instead of setting his feet he leaps while throwing and it goes beyond Allen's grasp.

I formation weak, WRs on each side. UCLA with seven in the box, 4-3 compressed.

The Riley fakes the toss/flip to Sofele, who kinda oversells it and none of the Bruin defenders. Anthony Miller releases Akeem Ayers way too early (block son!) and Ayers now has the open field to track Riley. Not sure if Eric Stevens was supposed to pick him up, but if the playcall was designed to release Ayers this early...no. That's just dumb. Miller or Stevens should've put more some effort into keeping Ayers out of there.

Again Riley leaves his feet to try and make a play. This is a worrisome throw because if Ayers doesn't block it, Tony Dye is coming in ready to pick that throw. Riley cannot leave his feet when he throws. Nice job knocking the ball down though.

By the way, for those of you wondering what playcalls by Andy Ludwig annoy me, this is one in particular. Not the fact that it was a rollout, but a fake-toss rollout (at least attempt to sell a handoff). If it works, awesome, touchdown. If it fails and no one bites, the defense can blow up that play in so many ways (sack, interception, etc.). High risk, high reward, and not necessary with a 21 point lead. 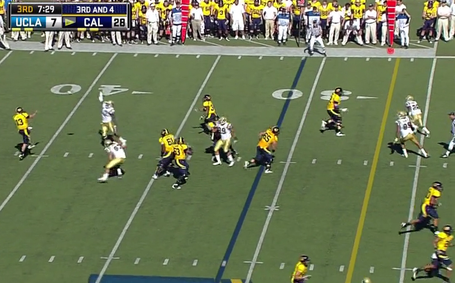 Actually I think I've found one worse. I hate this playcall. Hate it hate it hate it hate it. Why are we clearly indicating we're throwing when the run game has been unstoppable all afternoon and UCLA is only putting six men in the box? I don't get it either.

(Remember I only play an offensive coordinator on the Internet and my opinions are about as informed as that of my 1 AM Top Dog buddy. Perhaps someone smarter than me can explain it.)

Vereen setback, three wide receiver set, Jones up top, Allen and Calvin on the right with Miller. UCLA has a 4-2 (4 DLs, 2 LBs) up at the scrimmage point, with the middle linebacker covering the inside. Draw play to take advantage of this defense, right? Wrong.

So we set up the screen. Fine. But for the second straight passing play we release Ayers again and neither Schwartz nor Vereen try to bump or block him off for even a second. Why are we releasing the best pro prospect on the defense to get to our quarterback on two straight plays? For a guy who's had trouble with his footwork in the second half AND WHO JUST GOT HIS LAST PASS BATTED DOWN by Mr. Ayers, this seems ill-advised.

(Also, people seem to be bummed out by the fact. I think I know why Riley took some off of it: The last throw that was in danger of getting pick-sixed if Ayers hadn't knocked it down. He took it down a notch to ensure no interception would occur if any Bruin defender hadn't. Again the error here seems to be letting Ayers go way too early without a cursory attempt at blocking him out.) 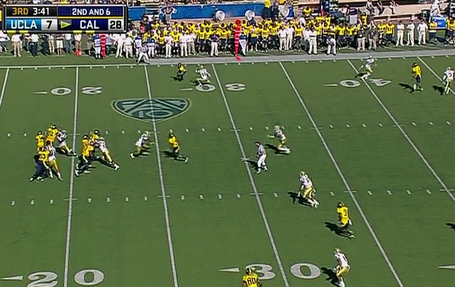 The strongside defensive end stunts inside but gets gobbled up. Donovan Edwards has a harder time keeping Nate Chandler in front of him, and eventually Chandler releases and hits the quarterback. Everyone else drops back and covers well, leaving Riley very few options with which to throw, but he waits patiently for Vereen to get out of the backfield and finds him as the dump-off option while getting hit. This throw reflects a more mature Riley--this pass would've been ten yards overthrown last year trying to force it into coverage. 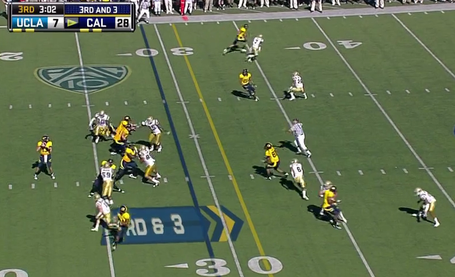 Hey, look, shotgun on 3rd and short! I wonder if we're going to run a draw play ... oh, nope there's another sack.

To be fair, this is a little bit better because the Bruins have eight in the box. It makes sense to attempt a pass here. Vereen's lined to the right of Riley, Allen and Jones are out left, and Miller and Ross on the right side. There's indecision here. Riley does have Miller down the middle on a mismatch with the safety Tony Dye, and he does seem to be looking straight at him, but for whatever reason doesn't throw to him. The separation between receiver and defender isn't great, but this is a throw Miller should be able to catch easily for the first down. It looks like a quick-hitting play too based on the lack of additional moves, so why Riley doesn't release the ball earlier is puzzling.

He doesn't get more time to act. Mitchell Schwartz doesn't cut-block Akeem Ayers successfully, and Ayers again roams into the backfield to get the initial pressure. Then Nate Chandler gets free of Justin Cheadle, and after avoiding all of that Sean Westgate gets right to Riley. Bleh. Partly on the O-line, partly on the QB here.

This is really the first time I've seen Riley be hesitant on a read where he should've thrown the ball for a pass pickup. I imagine Tedford was probably most upset about this play. 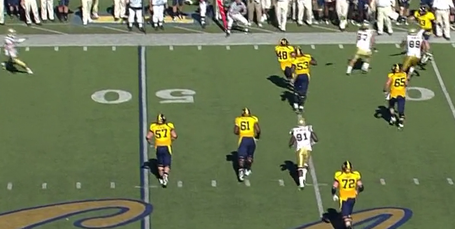 I formation weak, tight end left & fullback right. UCLA with a 4-3 under. Bruins only rush four, which shrinks to three when one defensive lineman drops back to shadow Shane Vereen slinking out of the backfield.

Offensive line breaks down. Nate Chandler smashes right through a double team by Brian Schwenke and Dominic Galas. Riley makes a play out of nothing, waiting until the last minute for when Eric Stevens releases his blocker Damien Holmes (who goes at Riley) and Riley finds Stevens. Good job here. 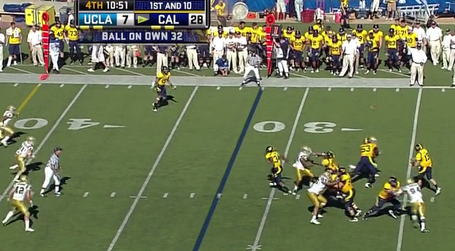 Four WR set, including Miller lined up to the left. Vereen in the backfield. LB shades over to guard Miller, so Bruins in a 4-2 look. Easiest throw Riley's had to make all day is his last one, as the corners shade back to prevent the deep throw and allow the flat pattern to Keenan Allen develop. Curiously we didn't attack the flats much considering all the deep coverage downfield, the general weakness of the Cover 2 scheme the Bruins ran. At least I don't think we did based on all the passes we threw up.

Based on this gametape, here are the early conclusions about Cal's pass attack before facing the Trojans

Perform most of these things properly, and we might be pleasantly surprised with the results on the field Saturday. And maybe we'll get a Kevin Riley that all Cal fans are happy to watch on the field.