Share All sharing options for: Fantasy Week in Review: Week 4

4ever Golden remains at the top, though he's now been joined by moving screen. Still, there is now more of a separation amongst the top pickers and the rest of the league, so let's get to it with some fun facts after the jump.

It's so nice to be in first place in my division despite scoring the fewest points in the league. I think this is what the Seattle Mariners were shooting for. 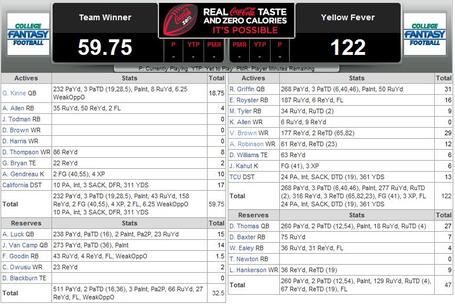 Yellow Fever cruised to its largest victory of the season 122-59.75 over Team Winner, which had three players inactive. I'm starting to think someone's not paying attention. Still, it was nice to see good efforts from Robert Griffin, Evan Royster, and Vincent Brown, so who's complaining? 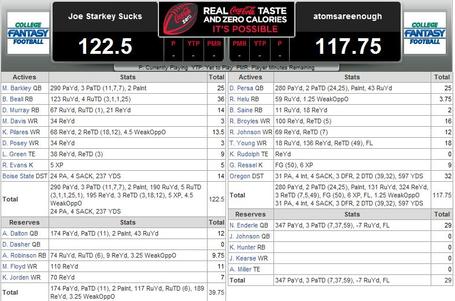 Joe Starkey Sucks recorded the highest point total of the week in defeating atomsareenough 122.5-117.75 behind strong efforts from Brandon Beall and Matt Barkley, while atoms inexplicably managed to get 32 points from Oregon's defense despite giving up 597 yards. Up and down performance, to say the least. Might have helped if he'd gotten more than one receiving yard from Kyle Rudolph, too. 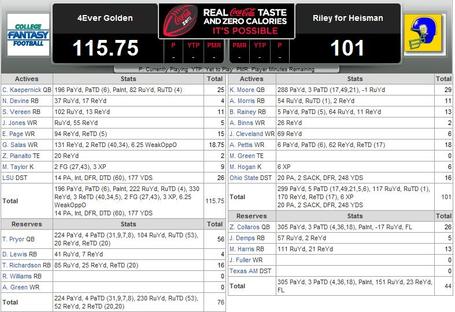 4Ever Golden put an end to Riley for Heisman's hopes for a victory 115.75-101 through the might of KAEPERNICK!!!! and the LSU defense. Would have been that much more of an ass kicking if he'd played Terrelle Pryor, though. Riley for Heisman got reasonably strong efforts from the Boise State duo of Kellen Moore and Austin Pettis to go with 16 points from the LSU defense, but it wasn't enough. 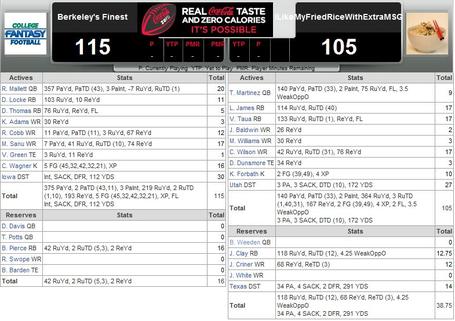 Berkeley's Finest defeated ILikeMyFriedRiceWithMSG by a score relatively similar to the previous matchup, 115-105. Berkeley's Finest was paced by the rocket arm of Ryan Mallett (despite his turnovers) and the Iowa defense, while MSG's well-founded effort from Taylor "T-Magic" Martinez, LaMichael James, Vai Taua and the Utah defense wasn't enough to get them over the hump. 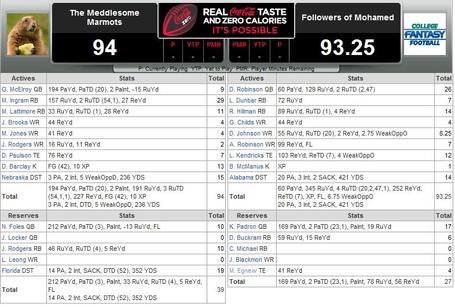 The Meddlesome Marmots squaked by Followers of Mohamed 94-93.25 in the closest matchup of the week. Mark Ingram's 29 points for the Marmots led all scorers for the week, and offset incredibly weak performances from all of the receivers on his team. Denard Robinson's cameo appearance for the Wolverines still led the Followers in points, but he could have used just one more play for the victory. 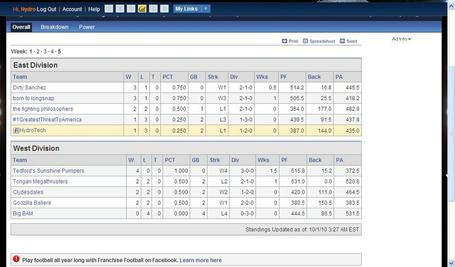 KEEP ON PUMPING THAT SUNSHINE! 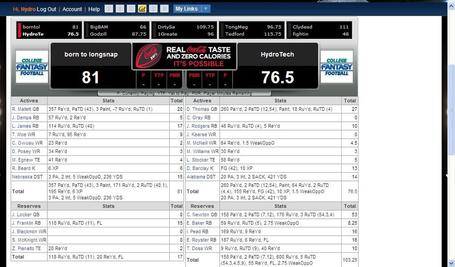 Hydro's team completely fell apart with him asleep as the wheel, as he fell 81-76.5 to born to longsnap. The main culprits were two inactive players, including WR Jermaine Kearse, which put him in a hole from the beginning. Even worse is that his bench was highly productive and scored more points that born to longsnap's entire team by itself. 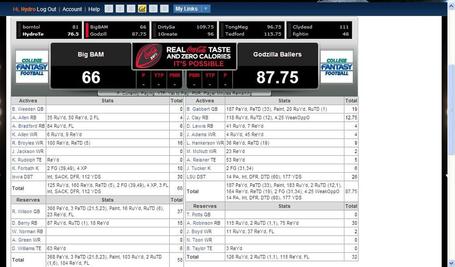 Big BAM continues to disappoint, as they went down 87.75-66 to Godzilla Ballers. It didn't help that Big BAM's QB, Brandon Weeden was inactive last week, and that his backup, Russell Wilson put up enough points to make the difference between the loss that the team suffered and a potential victory. Godzilla Ballers was led by the LSU defense to go with average performances from Blaine Gabbert and John Clay. 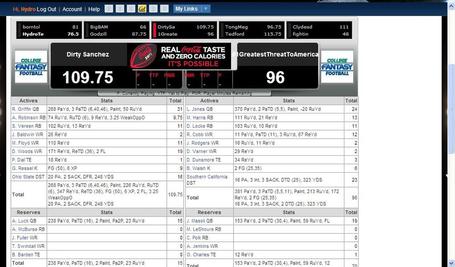 Dirty Sanchez defeated #1GreatestThreatToAmerica by a score of 109.75-96, behind Robert Griffin, Adam Robinson, and THE Ohio State defense. He also made a good call in playing Griffin instead of Andrew Luck, as that would have resulted in a loss. Let that be a lesson. #1GreatestThreat was paced by Landry Jones and the USC defense (although there really should be a weak opponent adjustment for playing against Washington State...I mean, come on), although their receiving corps did not help. 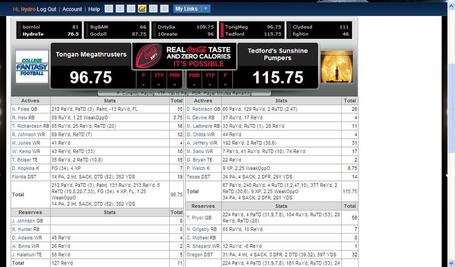 Tedford's Sunshine Pumpers continued their streak by defeating the Tongan Megathrusters 115.75-96.75. The Sunshine Pumpers got enough out of Denard Robinson to go with Adam Jeffery's 31 points and Mohamed Sanu's 17 points (the only bright spot on the abomination that is the Rutgers offense) to get by Florida's defense and a well rounded effort from the Megathrusters. Which included 10 points from Nick Foles. 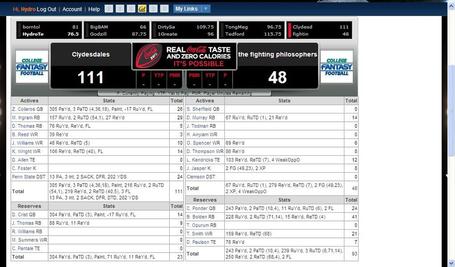 Clydesdales raced by the fighting philosophers, who are also asleep at the wheel, by a score of 111-48. The horses were led by Zack Collaros and Mark Ingram, and got a representative showing from the receivers, while the philosophers are still set on employing a real life backup QB as their fantasy starter.