Start off with the podcast, where CBKWit is in fine form. We (we as in CBKWit, Twist, norcalnick, and a random idiot you shouldn't pay attention to) discuss more about what went wrong in the horrifying UCLA loss, and look a little ahead to USC and briefly pass our verdicts on the canning of Pete Alamar.

Nuss, the hoops smarty over at CougCenter, had this to say about our defeat.

By the way, for all the pub that the cold shooting has gotten, the real culprit for the Bears was the numerous defensive breakdowns down the stretch of regulation and in overtime. When you're not scoring a ton of points, a team simply has to be able to rely on its defense. Cal couldn't last night. My guess is this will be an enormous teachable moment for Mike Montgomery.

So let's take a look at some of these breakdowns. We'll get to the first play of the game, and then show how UCLA exploited Cal's defensive weaknesses in this one. Big thanks to Telemachus at Bruins Nation for uploading his highlights yesterday so we could break down the tape and share in misery together.

Here are some of the particular plays and strategies UCLA used to beat Cal offensively. 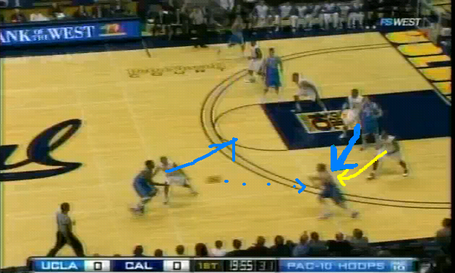 Simple pick and roll play. Lee dishes the ball off to Roll, and you'll see Nelson coming up to the angle to set the pick. MSF follows Nelson out onto the perimeter. 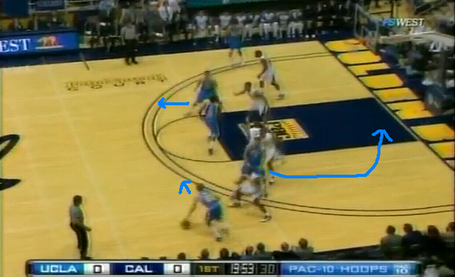 Here you'll see Dragovic come out, drawing Boykin to the perimeter, leaving the two bigs out of the paint. Nelson sets the pick and gets ready to cut. 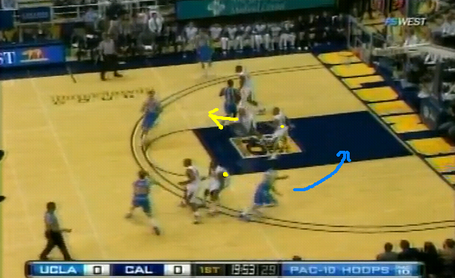 MSF gets caught in no man's land as no one switches to the roller, and Randle is left guarding the interior as Dragovic gets the ball... 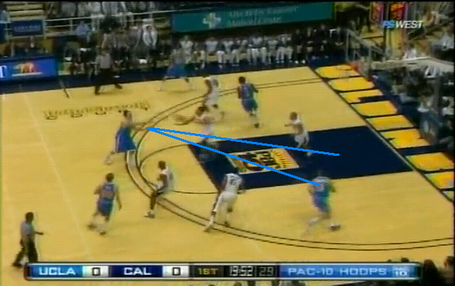 ...and finds the rolling Nelson for what leads to an easy lay-in. Notice how big the passing lane is for Drago to find Nelson...a very well-executed play, exploiting the slowness of the Cal big to rotate from outside to inside and making sure there was no one big guarding the paint.

Note: This scenario would happen AGAIN in overtime with Boykin and Randle playing the handler and letting the roller (Nelson) run uncontested to the basket, turning into and AND-1 for Nelson as Brandon Smith was the one underneath the basket. Inexcusable errors in rotation, especially letting bigs roll to the basket without anyone putting a body on them. You'll see this near the end of the 2nd half video in the Bruins Nation link above, around 3:00.

Note #2: MSF got picked on a lot in this game. For humanitarian purposes, I'll only include gamefilm of this play. 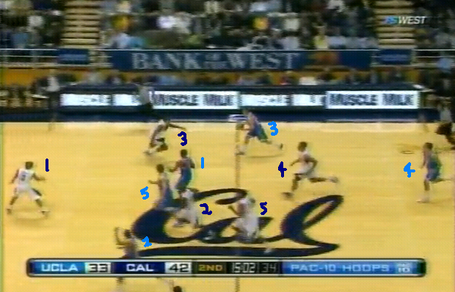 The Bears were caught sleeping several times on the fastbreak, even when they had all their men back. Here's one particular example (Bears identified by position in navy blue, ditto for the Bruins in baby blue). 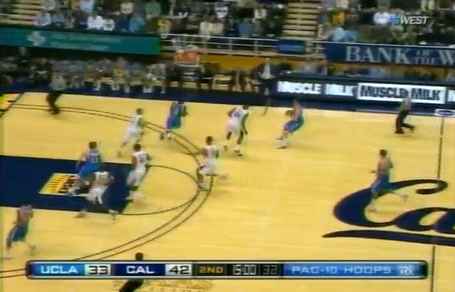 In a man-to-man defense, it's important for the Bears to keep close to their guys. See an issue here? 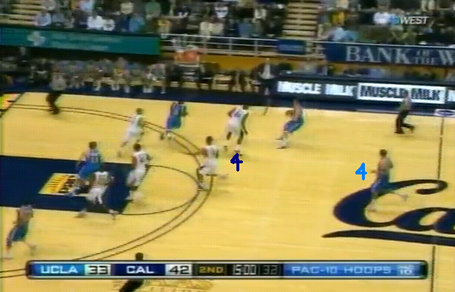 Here you see the jump shooting 4 Dragovic being totally left alone by Boykin, way too far away to contest any pullup 3. 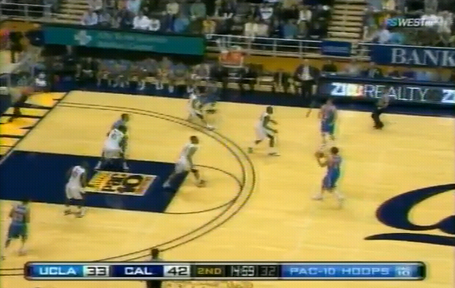 This leads to a wide open triple for the retarded cousin of Ivan Drago that cuts the lead to 6. It's the responsibility of the defender to know where his man is at all times, and more importantly know what type of player he is. Boykin seemed to fall asleep on this one, or mistook him for the real Ivan Drago ("I will go into paint and break you with dunk instead of settle for jumping with ball.").

Note: There was another huge 3 given up by Cal in transition, but it was 4 on 3 and I don't know exactly what happened on the offensive side. Probably MSF being slow again. 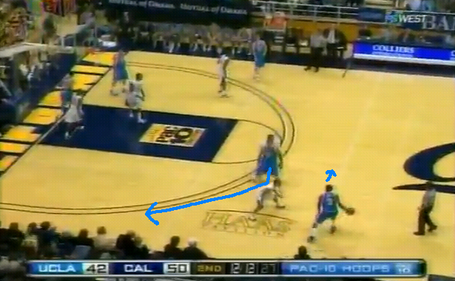 A little different from the pick and roll--with pick and pop, the player setting the pick moves for the open jump shot instead of rolling to the basket. 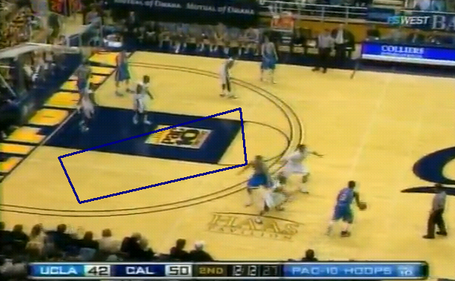 Great googly moogly. This is just horrifying defense by everyone involved. Amoke overcommits to Lee, Randle doesn't switch, and NO ONE even comes close to recognizing all Drago likes to do is take threes. 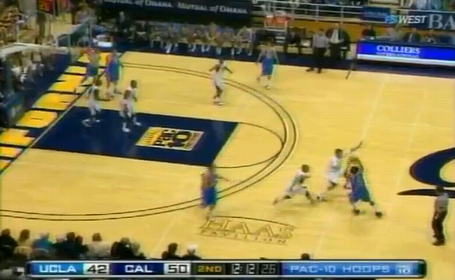 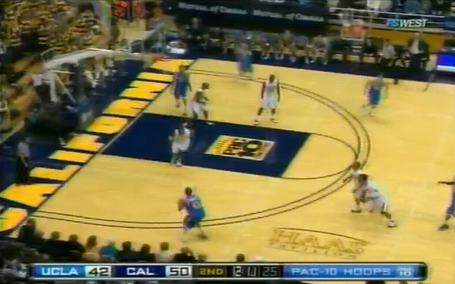 MSF finally recognizes that he should close out about an hour too late. Do I even have to tell you whether retarded Drago's shot goes in?

Okay, one last error by the poor Cal big. Late in the second half, MSF gets caught staring at the ball handler and forgets about where his man (Nelson) is. Hell, he's already getting ready for the rebound before the ball has left Roll's hands. 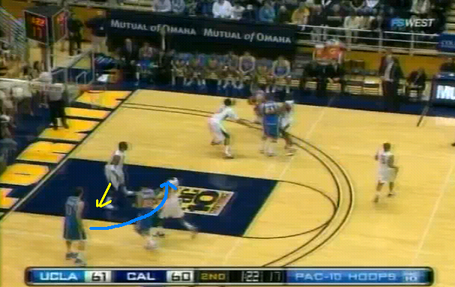 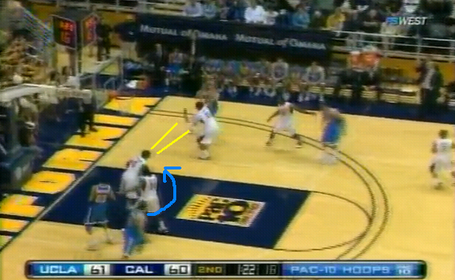 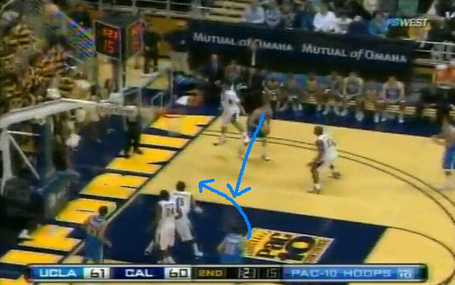 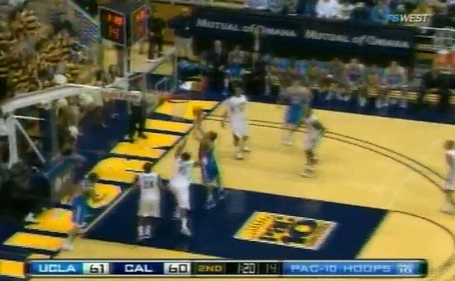 Sanders-Frison might be better defensively next year, but right now he seems pretty lost on the court on plays like these.

UCLA does take advantage a lot of the incompetent officiating (using a lot of semi-moving screens that almost always free up their shooters and don't leave bigs time to reach out and defend the shot, etc.), but the fact is lazy and uninspired defense like what was illustrated above won't work against well-coached teams like Ben Howland's Bruins. Three particular weaknesses...

...were exploited repeatedly; in tandem with tentative Cal offense and the aforementioned poor shooting came the horrifying upset at Haas. It was the perfect storm for a Golden FAIL.

I'll analyze more of this game for the next UCLA matchup, but those were three of the biggest deficiencies I saw, and we'll see if other Pac-10 opponents will try similar strategies to exploit the Bears.