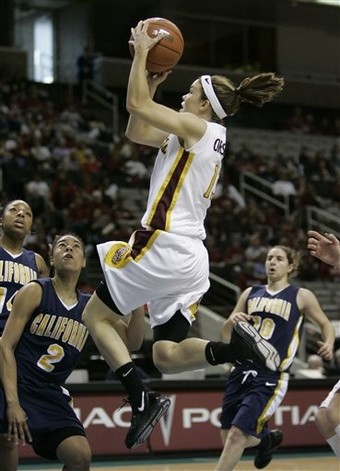 Cal (12-8, 5-3 Pac-10) will take on Arizona St. (12-7, 4-4 Pac-10) in a battle for 4th place in the Pac-10.  Cal opened up their four game home stand with perhaps their strongest all-around performance of the season against the Arizona Wildcats.  Paced by another scoring outburst from Alexis Gray-Lawson, Cal dominated the glass, won the turnover battle, shot and made more free throws, and shot better from the field.  Beyond Gray- Lawson's 39 points, Cal was particularly impressive breaking down Arizona's 1-3-1 zone with crisp perimeter passing, solid off ball movement, and a willingness to take and hit open three pointers.  On defense Cal held every Wildcat not named Ify Ibekwe in check, with a particularly strong defensive effort by Gray-Lawson against leading scorer Davellyn Whyte.

Now the Bears take on a deep Sun Devil team.  What will it take for Cal to extend their win streak to four and close out the first half of the Pac-10 schedule hot?  Hit the jump for a preview of what Cal needs to do to keep things rolling!

Arizona St. is led by Danielle Orsillo and Becca Tobin, averaging 13.7 and 10.8 points per game respectively.  Despite youth and injuries (Cal fans should be relieved that Dymon Simon is still out with a major knee injury - she torched Cal last year) the Sun Devils are a deep team with 11 players averaging 10 minutes a game or more.  Let's see what the four factors (explanation of the statistics HERE) tell us:

Well, how's that for even.  Cal and ASU both achieve and allow a very similar effective field goal percentage.  Cal is great at getting offensive rebounds - ASU is great at preventing them.  ASU forces plenty of turnovers - mostly because they play a full court pressure defense.  Yet they cough it up almost as much.  ASU also gets to the line more than Cal, but the also commit more fouls.

So what are the keys to the game?  For Cal, it will be handling ASU's pressure defense.  Breaking down the full court press will be a huge challenge for freshmen Eliza Pierre and Layshia Clarendon and it wouldn't surprise me if Joanne Boyle relies on veterans Alexis Gray-Lawson and Natasha Vital to handle the ball.  For ASU, it will be to continue their success at preventing offensive rebounds.  Cal's offense is so dependent on extra shots created by offensive boards, it's hard to imagine Cal scoring enough without them.  Hope for big games from Gennifer Brandon and Talia Caldwell, Bear fans.

With a win, Cal would continue an impressive turnaround and will announce themselves as an upper tier Pac-10 team.  With a loss Cal will need to regroup quickly with USC and UCLA coming to town.  Personally, I'll just be looking for continued improvement - the Bears have been gradually getting better all season and it's been a pleasure to watch.  Enjoy an actual televised game, comment away and GO BEARS!