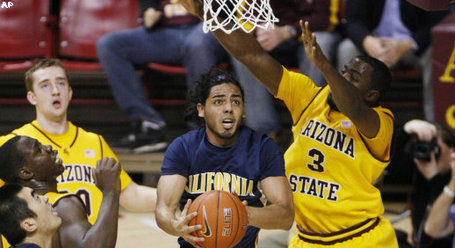 In one of their most impressive efforts of the season, Cal's offense won the battle over ASU's defense, 78-70. Although Theo Robertson had a tough shooting night, Jamal Boykin picked up his slack and dominated down-low, and received solid support from Jerome Randle and Patrick Christopher, along with late-game heroics from Jorge Gutierrez.

Cal exploited ASU's zone defense for much of the game. Randle, Christopher, Robertson, Gutierrez fed Boykin inside on many a big position, particularly during the early second half run that put Cal ahead up 16. With Omondi Amoke struggling with the flu, Boykin picked up the role as baseline cutter and Cal's points and slashers managed to cut inside and dish it to the senior power forward, finishing them off. Defensively, he held down Eric Boateng as best as he could, making him work hard for 30 minutes before Boateng began imposing his will during the final Sun Devil run.

Lost in Boykin's offensive explosion was Randle's all-around excellent game: 25 points, 10-16 shooting, 4-7 from downtown, 4 assists, 2 steals, only 2 turnovers. Unfortunately, our one stroke of bad luck might've ended up making the Cal-ASU game a much closer affair. After banging his knee, ASU seemed to get rejuevenated and went on their final run. However, he came back and hit some huge shots that not only kept the Bears up for the rest of the game, but did so within the context of the offense and dominating the ball (which probably preserved his energy and allowed other Bears to get involved).

Christopher's 21 points were definitely appreciated (especially his tough shot to give Cal a comfortable six point cushion with a minute or so left), and TedfordIsGod made an interesting point about how letting him handle the ball when hitting the lane helped Cal's offense run more smoothly.

Just put him in situations were he has the opportunity to drive and make an interior pass but leave him with Randle or Robertson as a safety valve on the outside. I think he can beat most players off the dribble, his problem is that he isn’t a quick enough finisher to score a ton of points off lay-ups. But I think we could still use it to our advantage more.

He managed to do just that, with three assists and a few ones that didn't register because Boykin got sent to the line. 8 rebounds and 3 steals are real nice too.

Finally, Gutierrez struggled early on, but came back and nailed the biggest shot of the game off of Christopher's biggest assist. Although he was 0 of 4 to that point, I had a good feeling the moment it left his hands from the corner (a similar defensive pest in Bruce Bowen excelled at the corner 3, and it seems Jorge is following a similar model). Then with Arizona State desperately trying to score, he came into the lane and drew a huge, game-clinching charge with a minute left. These are the sort of plays we've missed with Gutierrez out, and it's hard to see us pulling this one out without him on the floor down the stretch.

After the jump, we take a look at the Sun Devil side and look ahead to Arizona.

Now, let's be fair; Cal got a little lucky too. Robertson didn't have a great game offensively (0 points, 4 turnovers), but he took Rihards Kuksiks out of it too (3-8 shooting). However, Ty Abbott missed a few wide open looks that could've swung the game in the Sun Devils, and Derek Glasser had one of the worst games of his Sun Devil career (2-9 shooting on plenty of makeable shots). For much of the first half, it was freshman Trent Lockett who carried the team (15 points, 6 rebounds, 2 steals, a great block on Amoke) before Abbott started heating up and Boateng got going in the second half.

After the Bears made their run early in the second half, they seemed to let their foot off the pedal and make fatigued decisions as the seniors wore out. The Sun Devils played desperate, crashed the boards (11 offensive rebounds, all 13 second chance points in the second half) and seemed to befuddle the Bears with a more aggressive zone defense down the stretch. Timely plays helped Cal escape, but it did feel a lot like the Wazzu game, didn't it?
If you're a Cal fan, you should be a little worried that the Bears just won't find a solid rotation this season. Although Gutierrez did what he needed to do at the end and Seeley had a nice cameo, that was pretty much it. The second unit needs to settle down in the next two or three weeks and carry their load, or it probably won't settle in at all.  Montgomery has shown to be willing to extend the minutes of his seniors, and while it might win us games in the short-term, in the long-term it'll be our downfall.

The second unit will need to put up a better effort against a cresting, peaking Arizona squad Sunday. The Wildcats are starting to roll (beating up ASU and the Furd) and hopefully the guys off the bench can get us going and spell our seniors. Although ryandrew was perceptive enough to say we could beat ASU's zone, he does perceive Arizona giving us bigger troubles.

Playing against Arizona and USC, on the other hand, will definitely be problematic. both are long and athletic, and their pressure D’s will give our ball-handling inept team fits.

It only gets tougher.