Flash back to January 18th, 2009: Alexis Gray-Lawson has just scored 37 points in a thrilling upset over #9 Stanford. The 2009 Bears were Ashley Walker's team - she led the team in scoring, shooting percentage and rebounding. But both Joanne Boyle and Gray-Lawson insisted in their post game comments that the 37 point outburst was what they expected, rather than an exception to the norm:

"Alexis had a great game. They knew that we'd been running on Ashley a lot most of the year. Alexis is capable of having games like this day in and day out. They took our posts out of it. Lexi stepped up and had the kind of game that we really needed her to have. She can do this every night. We're going to need her to do this." 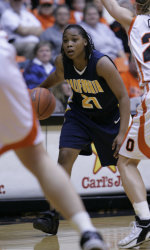 "Coach has been talking to me all week about being aggressive. To have a mentality that no one can guard me. It's really helped."

But Lexi never quite had another game like her performance against Stanford the rest of the year - she was the high scorer for the Bears in only one game the rest of the season. Ashley Walker was too good, and the Bears too deep, to force Lexi into a situation that called for her to take over.

Entering the 09-10 season, the Bears were going to need Lexi to take over. 6 of Cal's 9 leading scorers were gone. Cal's freshmen, while talented, are still raw. To start the season, Lexi and the Bears struggled to adapt to such massive change. Through the first 12 games of the season Lexi averaged 14 points a game - but with difficult shooting nights. She scored 25 points against Ohio St. but only shot 37.5%. She scored 18 against Texas A&M but only shot 24% from the field. The last of those 12 games was a rough, 3-9, 9 point performance against Stanford to open Pac-10 play. Lexi was forced to carry a huge burden on offense and the results were not pretty.

And then something changed. Maybe playing a brutal schedule that included 4 teams ranked in the current AP top 10 prepared the Bears for the rest of the Pac-10. Maybe 12 games was enough time for the freshmen to get comfortable enough in the offense to allow Lexi to play to the level she was always capable of. Maybe this is just the mother of all hot streaks (though I doubt it). Whatever the reason, her performances speak for themselves. To wit:

She's shooting spectacularly (effective field goal percentage of 51.3), she's drawing fouls, she's getting to the line, and she's not turning the ball over much despite handling the ball on essentially every possession. She's dominating despite being the clear number one option for opposing defenses to focus on. She's dominating despite playing more than 35 minutes a game and playing the entire 50 minutes of Saturday's double OT barn-burner. Setting a school record in scoring almost seems like the logical result of her recent play, a just reward for a senior who has meant so much to the program, even if she needed 10 more minutes than Jennifer Bennett got when she scored 45 in 1987. For historical purposes, here are the other top individual efforts in Cal history:

*There is a date discrepancy in Cal's records - the date listed in the single game scoring records does not match the date of Cal's 1987 game against Oregon St.

In setting the least-publicized major school record ever (seriously, try to find pictures and extensive information about the game. The best source besides Cal's official site is Building the Dam's excellent report courtesy of AndyPanda), Lexi had the disadvantage of playing for Joanne Boyle, and the disadvantage of playing against Oregon St. You will notice that with one exception Cal scored more points in each game with a top scoring performance than Cal did last week against OSU, despite an extra 10 minutes of game time. That's because Joanne Boyle doesn't play a breakneck style, and because Oregon St. deliberately tries to slow games down. Even though Lexi needed two overtimes, her performance was already arguably the most dominating offensive performance in Cal's history: she had 55% of Cal's points in regulation and 59% of Cal's points in the entire game! The only person on the above list with a higher percentage? Alexis Gray-Lawson, when she scored 65% of Cal's points against Stanford last year.

A rough weekend for Layshia Clarendon, with a tough shooting night against Oregon and limited minutes against Oregon St. She has more than enough talent to bounce back, and Cal will absolutely need her.

(Other) Player(s) of the Game vs. Oregon

OK, clearly Alexis Gray-Lawson would sweep every award this week - she's already won the Pac-10 player of the week, after all. We'll do our best to spread credit around. Against Oregon, that credit goes to Talia Caldwell and Eliza Pierre. Lost in excitement of a road sweep a new school record was the amazing job Cal did slowing down Oregon, the highest scoring offense in the country. They did this by forcing turnovers and grabbing rebounding. Pierre had 5 steals and didn't commit a foul (in addition to 5 assists and 7 points). Pierre also added 9 rebounds to go with Caldwell's 13, and on the day Cal had more offensive rebounds than Oregon had defensive rebounds! The best way to stop a high scoring offense is to keep the basketball out of their hands, and Cal did just that - led by Pierre and Caldwell.

(Other) Player(s) of the Game vs. Oregon St.

Gennifer Brandon and Natasha Vital both played critical secondary roles in Cal's double OT victory. Brandon was the one consistent inside presence for Cal as DeNesha Stallworth struggled with foul problems and Caldwell and Heater played sparingly. On a rare night when Cal failed to out-rebound their opponents, Brandon collected a number of key boards (11 in total) had a few buckets and did an excellent job getting to the line. Vital has quietly played excellent basketball while bouncing back from a slump that cost her a starting position. With her performance in Corvallis don't be surprised to see her back in the starting lineup next week. Vital was a consistent scorer and distributor with zero turnovers in 41 minutes of play, and perhaps most importantly played great defense in place of Eliza Pierre, who was constantly in foul trouble.

I watched a bit of Arizona State's 73-67 victory in Tucson over Arizona, an interesting matchup of different styles. Arizona St. ran a full court press that bothered the wildcats and forced a number of turnovers. Arizona ran a few different zone formations that clearly confused ASU, and it all led to a disjointed feeling game with lots of turnovers, fouls and free throws. Ultimately ASU won by out-rebounding Arizona and turning the ball over less.

Cal will probably be slight favorites in both games, if only because they will be playing at home. Both games will be critical matchups with two other teams in the middle of the conference standings, and to help build momentum going into another home weekend against UCLA and USC. Cal has salvaged their season with a four game winning streak. The question is how well they can build on the momentum with four straight home games against a higher level of competition than the schools from the Pacific Northwest.

Comment starter: What are your expectations for Cal against Arizona and Arizona St, and what do you expect from the four game home stand with USC and UCLA coming to Haas?