The Cal women (9-8, 3-3 Pac-10) travel to Corvallis to take on Oregon St. (9-7, 1-5) after securing their most important win of the season in Eugene against the Ducks.  Cal played their most complete, well rounded game on Thursday - four players scored in double figures, four players grabbed at least 7 rebounds, they shot 46% from the field and nearly 80% at the line while holding Oregon to arguably their worst offensive showing on the year.  Oregon St., meanwhile, has lost 5 straight games and 4 straight by 9 or more points.  Hit the jump and check out a quick preview of Oregon St. and what Cal will have to do to keep the win streak going! 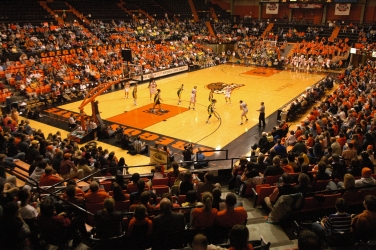 Is everybody prepared for another game against the orange menace?

Oregon St. is led by Talisa Rhea, one of the highest scorers in the Pac-10.  The junior guard scores 17.4 points per game but doesn't do it in the most efficient way possible - she's only shooting 35% from the field and takes about 30% of OSU's total shots.  She does have the ability to get hot from 3 point range, and considering the success Washington St. and Oregon had at times with the 3 point shot, Cal must play aggressive perimeter defense.  Guard Haiden Palmer and forward Kirsten Tilleman are the other main threats.

Shooting:  Cal and Oregon St. both have similar shooting percentages with the exception of Cal's weaker 3 point defense.

...Wow, we might actually have a marginal advantage in the turnover category for the first time!

Free Throws:  Cal does a slightly better job of getting to the line and making their shots when they get there.

Critical caveat:  In all of the four factor categories, Cal and OSU are very close - perhaps close enough to be statistically insignificant.  BUT.  While Cal was playing Baylor, Ohio St., Texas A&M and Boston College, Oregon St. was busy playing Houston Baptist, Northern Arizona, UC Santa Barbara and Seattle.  Cal has a huge strength of schedule advantage that would help explain why two statistically similar teams have different conference records and trajectories.

This is a game that Cal should win, but it's on the road and OSU has played a few teams close.  This is as close to a must win as a road game can be.  If the Bears can continue their impressive defensive performances and build on the offense they showed off against the Ducks they should leave Oregon with a huge sweep.