(carp's idea here is an interesting one to consider.  Look for Part II to come up soon!)

CGB and the Internets in general have a rich history of discussing quarterbacks.  I should note that this post does not advocate a two QB system or for Riley being benched at some point in 2008 in favor of some unproven QB.  I believe the passing game struggles were the responsibilities of the entire offense-related aspects of the program (Oline blocking/coaching, QB play, WR play/coaching, RB pass blocking and, at times, play formation/calling).  About the only guys who really did well this year on offensive were Ron Gould, Matt Summers-Gavin and Anthony Miller and both players were injured at times this year.  I almost put Tedford and Ludwig in this category, but I think they need to share some of the blame, too.  My point is that this is not a rip-the-offense piece where I put 100% of the passing game failures on the QB.  The point of this crazy thought, is to analyze and discuss several games where the backup QB might have played without impacting the outcome of the game at hand.

The casual fan may look at backups playing in garbage time as having no real impact in either the outcome or the future of the program.  However, I believe it is a critical time for learning and growth.  The benefits that I see are the following:

After the fold, take a look at more information about how Tedford played his backup QBs.  GO BEARS!

Riley’s a 50-55% passer who's actually around 47% against good competition (more on that to come in another post).  He may or may not improve next year.  I’m leaning towards 'not improving' as the skill sets that need sharpening appear to be difficult, perhaps impossible, to improve upon.  That leaves the fan to wonder if other quarterbacks on the roster can actually complete a forward pass. As I said in the intro, Riley was pressured and receivers dropped balls.  However, he had some glaring inaccuracies, too.   Unfortunately, due to personnel decisions by the management the 2009 football season has ended without us really being able to understand the talents on the roster behind Riley.  Let’s look at several games where Mansion or Sweeney could have received more playing time and, most importantly, actually attempt passes while they were playing.

This victory was also known as the game that confirmed the Top 15 preseason ranking.  Riley looked like he had put it together, and Best looked like he’d be in New York in December.

According to ESPN the Ocho, Riley completes a TD to Vereen with 13:28 to go in the 4th Q (52-13 Cal), Mansion relieves Riley on Cal’s next drive and promptly does the following:

Cal would get the ball again for an additional 4 minutes and not throw another pass.  The above incompletion was Mansion’s only pass attempt of the season 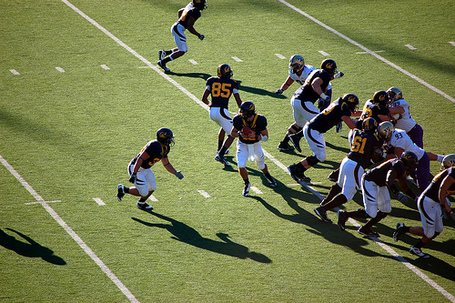 On the one hand, it was smart of The Management to play Riley into the 4th quarter to build confidence, continuity, etc.  At the time, it appeared he had a great game against a moderately successful program from an auto-qualifying BCS conference.  Mansion’s job was to run out the clock, and don’t do anything stupid.  I don’t disagree with the general approach, as I think it was a respectful way to end a blowout.  I love Tedford’s class in situations such as this.

However, as the scoreboard indicated, this game was over at halftime.  It was 45-6 with 10 min left in the 3rd quarter.  I’d argue that getting your (now apparently stud) starting QB out of the game at this point avoids an injury possibility, and would have allowed Mansion and/or Sweeney to get some real reps out there without losing the game.  It was an afterthought at the time, and seemed overly critical of a very nice win.  Now, to me at least, it feels like a missed opportunity.

Decent FCS team at home…Bears come out a little flat but respond well and cruise the rest of the way.  Hope/optimism is still high.

This one’s a little harder to look back at…Riley’s still out on the field with 12:30 to go in the 4th quarter 45-7 Cal), and the Bears next possession features DeBo and Sofele running free for a TD.  Let’s give the Bears the benefit of the doubt and say that Sweeney was handing it off to the RBs (I can’t remember and ESPN doesn’t give sufficient details).  Sweeney completes his only pass attempt with less than 3 min to go in the game: 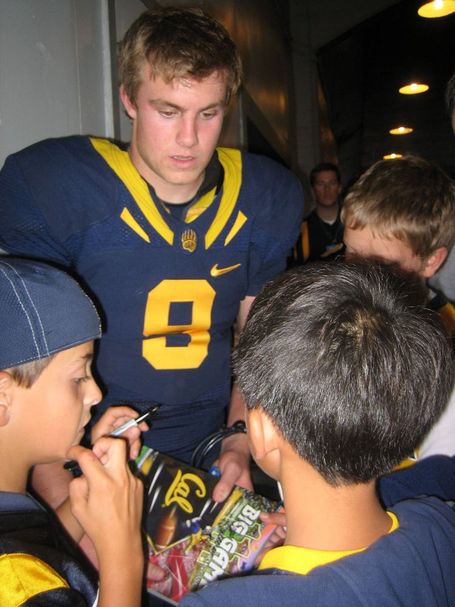 No, I am not Aaron Rodgers!

The first no-show game of the year.  Sofele makes a great play on Special Teams, and Cal gets the ball at Oregon’s 22 with 14:56 to go in the 1st Quarter.  Oddly, one could argue that the game was over after Cal was leading 3-0.  (Riley sack when he had a lot of time to throw + two incompletions which lead to a FG).  Anyway, let’s look at this one a little closer:

Sweeney enters the game with 4:05 remaining in the 4th Quarter (42-3 Oregon)  He gets to throw 5 passes and completes one of them:

While the scoreboard and Cal’s on-field showing indicated things were done at halftime, the game probably wasn’t officially out of reach until either 9:10 to go in the 3rd Q (32-3 Oregon) or 2:10 to go in the 3rd Q (39-3).  Like the previous two blowouts, The Management doesn’t put in the backup QB until nearly a full quarter later.  Put the backup in too early, and it is 2008 all over again (QB gets yanked quickly when things aren’t going well).  Down 36 on the road with 17 min to go seems to me like a good time to put in the backup without the repercussions of a QB controversy…unless of course the backup throws 3 TD’s.  Would that have been such a bad thing, though?  Taking this a step further, is it fair to say the backup QB had so few of opportunities in order to avoid a potential controversy?  Let’s get back to that later.

It was over when Riley found Taylor Mays in the end zone.  I suppose it wasn’t officially over until Riley overthrew Best on the 4th down with 5 min or so left in the third quarter (23-0 USC).  The sullen and mutinous crowd would have likely gone crazy if the backup QB would have had led Cal to even a successful drive.

I cite this game, because this was a situation where it appeared Cal might have (but didn’t) run away with the game and allow time for the backup QB to play.

First, one should always be pleased with a double-digit road win over a bowl-bound team.  However, the Bears appeared headed towards a blowout win with a 15-point halftime lead and 5 TD’s in the first half.  That unfortunately didn’t happen as the Bears couldn’t put UCLA away until Kendricks’ pick six with 5 min to go in the game (45-26 Cal).  Cal’s D allowed 311 yards in the air, 137 yards rushing, and 17 first downs.  Of course, not playing the backup QB was the right call.  However, if Cal could have put up 10+ points in the 3rd Quarter, this would have been a great opportunity for the backups to play.  What shouldn’t get lost is that this was Riley’s best game ever, in my opinion.  On the road against a defense that featured talents like Price, Carter, and Verner, Riley went 14-23 for 205 yards, 3 TDs, and a key block on Best’s 93-yard scamper.  This is a Riley I could learn to love. 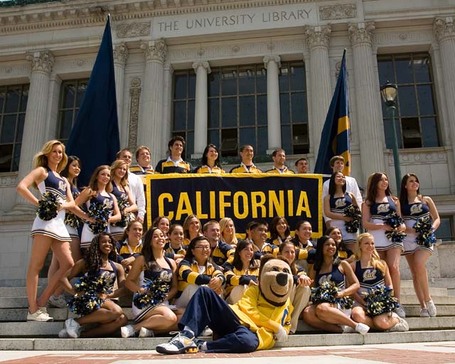 In part II, we'll take a look at the rest of the games and have some final conclusions!  GO BEARS!