For a brief Washington recap (where the Bears won 60-43), we turn to one of our loyal women's hoops fans, CalBear81.

The game turned in Cal’s favor early in the second half when Cal went on a 10-0 run in the space of a minute and a half. Eliza Pierre was amazing in the second half. She was just all over the other team, making steals and interfering with their passes and their shots. And she ignited the rest of the team on defense. Washington made only four field goals in the entire second half, and Cal outscored them 36-18 in the second half. It was a very impressive defensive showing, although on offense the Bears still had trouble making some of their shots.

This game was just what Cal needed. The season has been disappointing so far, because all those freshmen (four are starters now) haven’t quite found themselves yet. But this game gave a glimpse of just how much talent there is on this team. If they start playing like this regularly, they will have a good season. And next year could be a great season.

Cal finishes their all too brief home stand against the Washington St. Cougars.  WSU is almost certainly the worst team in the Pac-10 - as of earlier this week, Arizona, Arizona St. and Oregon St. all have their only conference victory over WSU.  I'm writing this preview before WSU's Thursday game against Stanford, but I'm going to go ahead and assume that the Cougars will be riding a 6 game losing streak entering their matchup at Haas.  Hit the jump and we'll take a quick look at the Cougars and how Cal should be able to exploit them. 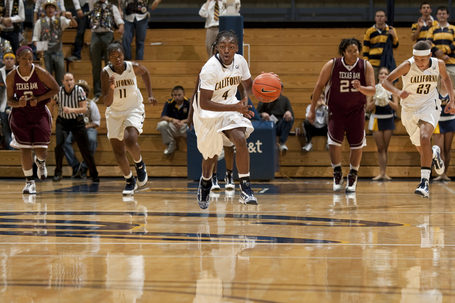 Guards April Cook and Kiki Moore lead the Cougars, scoring 13 points a game each.  Once again Cal's young guards will be called on to contain the opponent's most important players on the perimeter.  It will be interesting to see if Coach Boyle starts Natasha Vital for senior experience or Eliza Pierre for her impressive lateral speed for defensive purposes.  They both, along with Layshia Clarendon, will be critical for Cal to put away the Cougs like they should.

From a four factors standpoint relative to their opponents, WSU shoots a poor FG percentage and they don't get to the line much.  They do rebound marginally better than their opponents, although rebounding is Cal's strength.  The one way for Cal to really lose this game would probably be turnovers, as WSU takes care of the ball and creates turnovers on the defensive end.  Cal must maintain possession.  If they do their superior size and athleticism should carry the day.