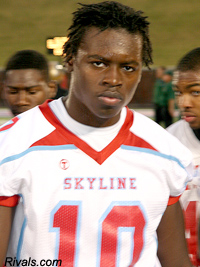 From ESPN's On the Trail (HT solarise):

He selected the Bears over Minnesota, Wisconsin, North Carolina and Utah.

He also went to the same school as Steve Williams, our highly touted DB commit from last year. Fire Starkey says he converted from a running back his junior year, so there's still no official tape on him as a defender.

Solarise talks about his measurables:

At 5’ 11"/6' 184lbs, Adrian Lee already seems more physical than his former Skyline teammate Steve Williams (5’ 10" 160lbs) when coming into Cal. Gerry Hamilton noted Lee’s "physicality" when scouting Skyline High. Also remember that Syd is 5’ 9" 191lbs, and he was was all-world for us. Lee’s physical attributes aren’t too far off when compared to Syd.

So if size & speed are not issues, you move into the techniques & mental part of being a college CB. We’ll have to wait & see how quickly Lee picks up his game after Coach Simmons.

Lee is a versatile defensive back who is getting looks at both corner and safety. His recruitment has risen steadily over the season, and he’s now sitting on a handful of scholarship offers.

“I have offers from Cal, Kansas, Kentucky, Utah and a few others,” Lee said. "Miami and Minnesota are also talking to me and sound like they could offer. Right now, most schools like me as an athlete who can swing between corner and safety.

“I actually prefer corner because it’s what I’ve played my whole life but colleges like my size as well and think I’ll fit in well at either spot. Cal likes me for corner and that’s what I’m comfortable with.”

It's always nice to land Texas recruits, even if they're not highly touted--breaking into the pipeline seems to have worked well for us, and the last two star we got from Texas? Justin Forsett.

For those questioning Bob Gregory and his lieutenants, Cal is quietly piecing together a monstrous defensive class. One or two more commits and the Bears defense could be in great shape for the next three/four years.