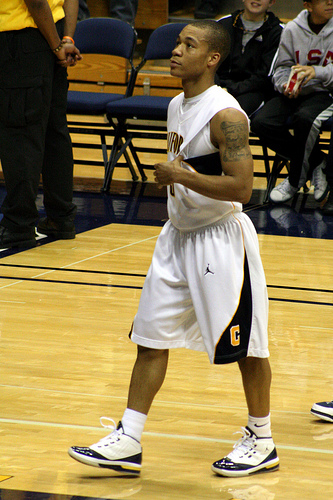 Meet the Randle-sassin. A prototype android with long-range capabilities, his accuracy makes him an early model for 4th generation warfare to eliminate enemies like the Washington State Cougars. Unfortunately in this developmental stage, he's only about 50-50 accuracy-wise, so some of his missiles ended up leveling the Idaho Panhandle. Apologies to all the slain potatoes--we will all eat french fries in your honor.

Thankfully, the missiles that Jerome Randle targeted correctly gave the Bears a huge win in the Palouse. Everytime Randle, moved, aimed, fired on the go, he was bulls-eye with 39 points and 9 assists. He totalled 28 points in the second half, killing every brief Cougar rally, not letting Washington State even sniff the chance of a dramatic comeback.

Add that into 11 points and all of his 9 assists in the first half, where the Bears exploded in the opening five minutes to an unexpected but totally welcome double digit early lead. Randle had 7 of his dimes early on, helping set up Theo and PC for transition triples. Theo hit all his three pointers in the first few minutes to put Cal up early and provided the cushion that kept the Bears ahead wire-to-wire. Christopher played a solid game from start to finish, and Boykin provided the dirty work inside. The four seniors combined for 89 of the Bears 93 points and carried the load the entire night.

After the jump we get opponent reaction, fancy graphs and good/bad news. Discuss in the comments: Where does Randle's 39-9 rank for you in great Cal hoops performances, and how annoying is it that we'll never see ANY footage of this?

The bad news is that the seniors that Mike Montgomery said had to carry his team are literally spent. Randle played virtually the entire game, Christopher and Boykin put up 35 minutes, Theo 33. To expect them to turn around and expend the exact same effort against an athletic, up-tempo Husky team that's desperate for wins in 36 hours seems a little unrealistic, especially considering Washington will be well-rested and is tough to beat in Seattle.

The good news? At the very least, these guys got us the split. Now it's up to everyone else (Zhang, Smith, Seeley, Nikola, a hopefully healthy MSF) to take some of the burden off of the seniors who carried this one and try and land Cal what would be a crucial road sweep. If they can't, let's not bank on anything Saturday morning--we're running out of salvos for this mission.

Grady from Coug Center, who actually attended the game, had this to say.

I was surprised, but not shocked by Cal going off offensively to start. However, I was tremendously happy our young team didn't lay down. Not only did they make it a game, they made it a game by halftime. A remarkable feat for sure. The crowd loved it too. Of course it also resulted in what I now refer to as the 'Beasley Jinx': every time, and I mean every time the crowd gets really into it, something horrible happens. Tonight, with the whole arena standing up on the excitement of the Cougar comeback in the first half, it was Jerome Randle nailing a three to bring the Cal lead back to nine. Ugh.

In the second half, Cal just proved they are better. Make no mistake: the Bears are an elite offensive team, and the Cougars are no longer a good enough defensive team to string a few key stops together. That was the difference. That, and some untimely turnovers combined with a sub-par free-throw rate. However, we did rebound well against a good defensive rebounding team, and we shot well enough to keep things competitive. Still, this team often lives and dies with Klay Thompson's performance, and tonight it was more of the status quo.