This website is all about me.  Me, me, me.  But then, secondarily, once I allow it, other people.  And often times those other people are you.  The readers!  The second most important part of CGB!  Besides me!  We started doing these Report Card posts for football to give the readers a chance to have their say.  Of course, it is a lot of listening to you guys, so we had to cut it back.  Instead of having so many categories for basketball, we now have five.  Point Guards,Shooters/Slashers, Bigs, Team Offense, Team Defense, and Coaching.  And since there are so many basketball games, we'll just post up one Report Card after the Saturday game for both the games that week.  This should work out well.  And we got rid of grades, because it was too much work to do all that math.  Math is beyond my meager abilities as a PoliSci major.

Today, we have our first Report Card for the UCLA and USC games.  Cal split the games, so people are mixed, pointing out positives and also negatives.

For example, here is a great comment from boomtho that is reasoned on both sides:

boomtho - Robertson continues his great play. His FT's have been outstanding as well. PC pulled the disappearing act we've gotten used to, though I'm glad he wasn't forcing fadeaway jumpers. I really wish that when he is curling, if he's going to curl to ~20 feet away that he sets behind the line instead of on it. Nikola bricked a 3, as expected, but was probably our defensive player of the game. Amoke played solid, though he picked up (at least) one stupid foul. Also, for this team, he's a big, not a wing.

After the jump, check out the rest of the comments, more photos from Monica's Dad, and start writing your own comments in future Report Cards.  GO BEARS! 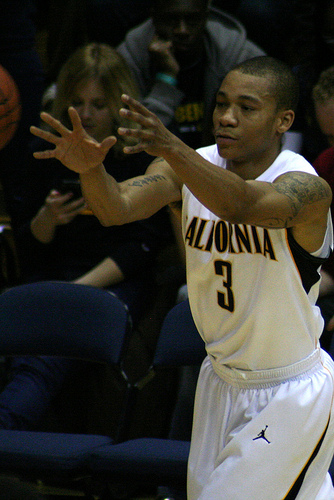 boomtho - Randle had some early TO's but calmed down after that. Hit some tough jumpers and did a really good job drawing fouls off the dribble (his acting sure didn't hurt). Didn't notice Smith too much.

BTown85 - BIG improvement over the UCLA game for JR (how could it have been worse?); really showed his mettle.  THAT'S what I expect of Jerome; ho-hum scoring 20+ points and running the offense. 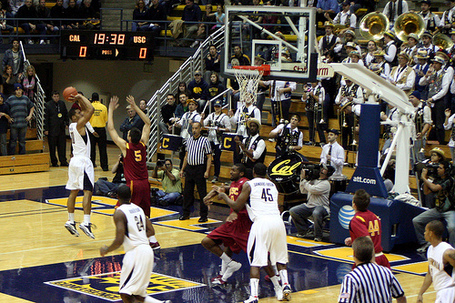 BTown85 - Never know which Christopher is going to show up...Would love to see more taking it to the hole, which he did a bit at the end.  Theo was AWESOME band Nicola played out of his mind.  Game ball to him for SURE.  Amoke was adequate.

norcalnick  - Theo is probably the collective MVP of the week, easily the most consistent performer in every phase of the game.  He did the best to compensate for UCLA's perimeter zone and USC's stifling defense, abandoning is typical three pointers and consistently attacking the lane.

Christopher had a great first half against UCLA, then didn't do much for the rest of the week.  Sigh

After Nikola got burned over and over again by Turner in the Ohio St. game I wrote him off as an impact player.  He proved me wrong against USC, proving that a) Turner is an elite player who would make most people look silly and b) although still iffy offensively, he will almost always have something to offer on the defensive end.

Amoke's quickness allowed him to destroy Dragovich against UCLA, but he had a tough time dealing with USC's superior defense.  I still like the progress I've seen so far and his improvement makes me less worried about next year's rebuilding effort. 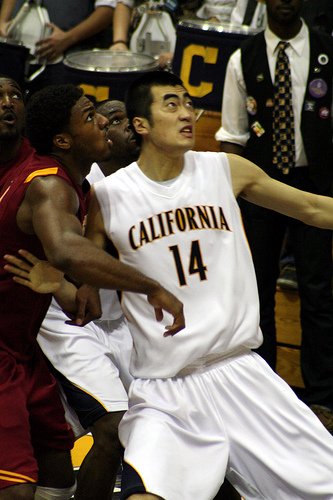 boomtho - I continue to question why MSF starts over Amoke. We haven't seen the benefits from his (supposed) passing ability. Boykin started the game with a pretty fadeaway, but missed some make-able shots inside and got lost on pick and roll defense a few times. Zhang got the easiest basket of the night (off PC's feed) but actually got scored over by Garrity, Stephenson, and one other guy. Pretty surprising, but he played solid post D and actually moved his feet pretty well on the pick and roll.

BTown85 - Boykin was hitting early and I wished he'd continued shooting.  MSF hit more shots than I expected, but I wish he'd keep his hands up on defense.  Max was good and aggressive, yet people were able to shoot over his outstretched frame.  Does he need to be more aggressive?

norcalnick - Rough week for MSF.  Markhuri seems intelligent and has good court sense, but I just don't think he (currently) has the tools to succeed in the Pac-10, particularly on offense.  He's not fast enough to stay with most bigs and he's not tall enough to compensate by forcing them to change their shots.  I find myself looking forward to seeing Max come into the game.

For whatever reason Max got very little time against UCLA.  He looked good on D in the first half against USC but was beaten a few times in the 2nd half, which was jarring after some of his recent defensive displays.  Clearly USC has a stronger inside presence than Stanford.  As Max gets experience against better bigs, his ability to lock down the key should improve.

Jamal is still hitting his open looks, but didn't have a huge impact much of the week, which was odd considering Amoke's ability to exploit UCLA's zone inside. 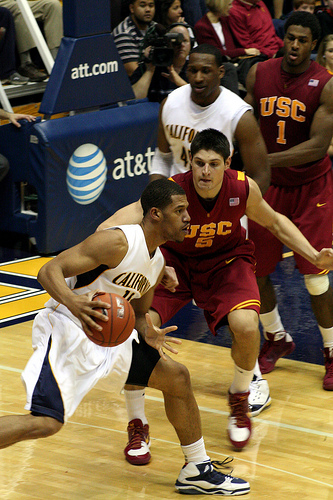 boomtho - Our offense stagnates a fair amount, which honestly isn't the worst thing because it gives Jerome a great chance to penetrate. We got a little jumper happy toward the end of the first half but Monty righted that at halftime. I'd love to see anyone who could consistently work on the block, but I'll keep dreaming. PC needs to run harder off screens (like shoulder to shoulder) or he's going to continue to be invisible.

BTown85 - Hit some rough spots that they survived, but they won't against better teams.  WAY too many turnovers; gotta figure that out.  Will Jorge help that or contribute to that???

norcalnick - Cal's offensive performance against USC, considering their great defense, was one of their better jobs of the year once they decided to stop turning the ball over.  Their excellent shooting percentage against USC's tough D makes the UCLA struggles even more head scratching.  I don't know weather to chalk it up to bad luck or to our continued struggles against zones. 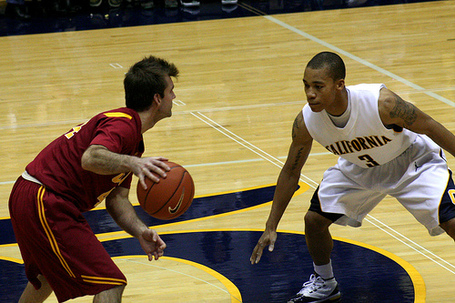 boomtho - Played pretty good defense, though we started the second half very shaky, giving up a few offensive rebounds. Jerome looks very engaged on defense, which is a pleasant surprise from last year. We still get caught hedging too high on screen and rolls, allowing people to slip to the basket or to reverse the ball quickly and gain an advantage. We had pretty active hands which led to a few steals, which was nice.

BTown85 - Good at times, terrible at times.  Better than the UCLA game; hope that it gets better as the season progresses to the Washington teams.

norcalnick - If we had a) closed out on 3 point shooters against UCLA and b) not let Reeves Nelson control the paint in OT, it would have been a stellar defensive showing.  I kinda wish Monty would have given Max a shot on Nelson in OT, but I'll trust Monty on knowing if Max is ready for that kind of assignment. 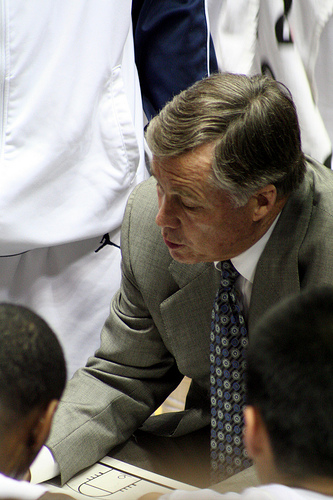 boomtho - I'd love to see us run more set plays, because the flex cuts for Theo and PC tend to work well. Whatever Monty told Randle after his first stint got him going (or maybe it was the fluids?). MSF still with some stupid off-the-ball fouls, which need to get corrected. One major mistake was not demanding that we drive the ball with 10 min to go in the 1st half -- they already had 5 team fouls, but we didn't get into the bonus until 3 or 4 minutes left in the half.

BTown85 - Nicola move was top-notch (I was going to say genius because I wouldn't have thought of it........not that that's saying much).  Not sure what coaching can do about the TOs, but I wish there'd been a more obvious adjustment there, and we HAVE to find a way for more offensive rebounds for second chance points.  Not sure if our bigs are too slow or what, but THAT would make a HUGE difference for us.

norcalnick - Well, you can't coach players to make open shots in game, and I think Cal gradually got better against UCLA's zone.  Monty's big coaching contribution was finding the right lineup to close the game against USC.  He saw the problem (Dwight Lewis) and he found the solution and stayed with it for the W.  Well done, Coach.