Time: 3:00 PM PST
TV: None
Radio: Listen to Cal's audio stream here
Streams: USC's official website stream should go live at 3:00, but it might be behind a paywall.  Check the comments.

Cal lost an ugly, physical matchup with UCLA on Friday, and missed a golden opportunity for a big road win, as UCLA’s star freshman Markel Walker only scored 1 point in 14 minutes as she struggled with a nose injury.  The Bears played great defense for 30 minutes, but UCLA scored 23 over the last 10 minutes of the game by hitting mid range jumpers and consistently getting inside and drawing fouls.

The key stats from the loss?  Cal shot 28% from the field, 50% from the line and had 23 turnovers.  If the Bears are going to beat USC they will have to find a way to improve on their recent offensive performances.  Hit the jump for a look at USC and what Cal needs to do to break into the Pac-10 win column.

USC is led by Sophomore guards Ashley Corral and Briana Gilbreath.  Corral is the primary ballhandler and with increased playing time this year has seen her output double.  She averages 16 points and 5 assists a game, and puts up lots of 3 point attempts.  Gilbreath averages 12.7 points and leads the team in rebounding.

The keys for Cal beyond improving on the dreadful offensive numbers against UCLA will be perimeter defense and dominating the boards.  Corral and Gilbreath both play 35 minutes a game and take the majority of USC's offensive possessions.  It will be critical for our guards to play quick, sound defense.  If they can take one or both of USC's guards out of their game USC will have big problems scoring. 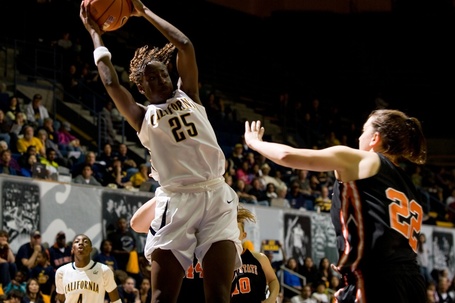 USC isn't a big team:  they only have one contributing player taller than 6'2'', compared to Cal's four.  The Bears should dominate the glass on both ends.  Cal has relied on offensive rebounds to compensate for poor shooting, and tonight's game will be no different.  Cal needs this game badly.  Road sweeps can sometimes be brushed aside, but an 0-3 start to the Pac-10 campaign would be tough to recover from.  Go Bears!