Well, I have good news and bad news.  The good news is that I'm back for another season of Cal football, snapping away.  And away.  And away.  The bad news is that I'm a mediocre photographer.  Our truly great photographers, TheNick and TrisWeb, both moved away from the Bay Area.  So, I'll do my best to help give a better feel for what the Cal gameday experience was, but I fear that I will not be able to provide as solid game action photos as TrisWeb and TheNick can.  I'm always working on getting the best quality photos for you, the readers (save for rollonubears, who I hate...), so if you are an aspiring game action photographer interested in gaining the exposure that the 3rd best Cal sports blog has to offer, don't hesitate to email us at the contact email.

Of course, even if I can't offer the highest quality photos, I still take my job very seriously.  Taking our jobs seriously is something important to ALL Cal fans, whether it's taking photos, rooting on our teams, or preparing an alcoholic beverage to be explosively shotgunned down ones throat.

Yes, we take it all very seriously: 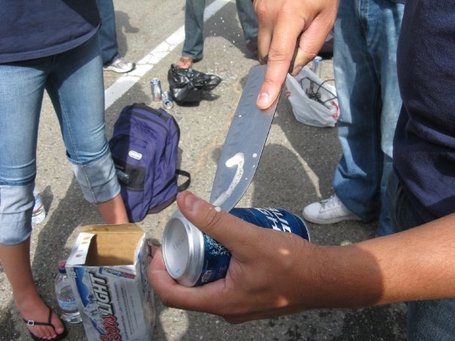 But perhaps I should back up.  All weekend long I was getting good feelings about this game.  Positive omens were popping up everywhere.  Like getting a chance to walk behind a taller, thinner, blonder version of Steve Levy! 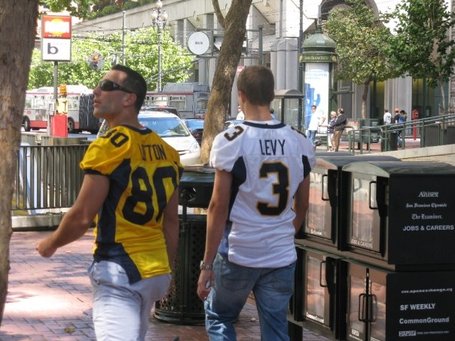 Even the stores were broadcasting their allegiance to us. 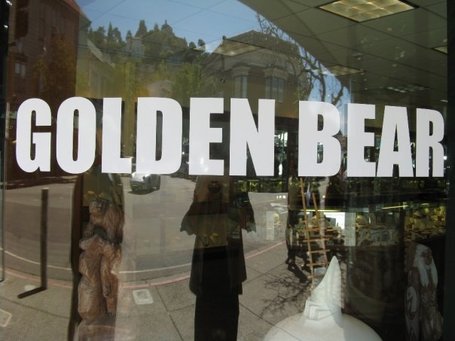 That worked out quite well in this case, because not only is important to get the right pre-game foods, but it's also very important, as Yellow Fever can attest, to EAT THE ENEMY. 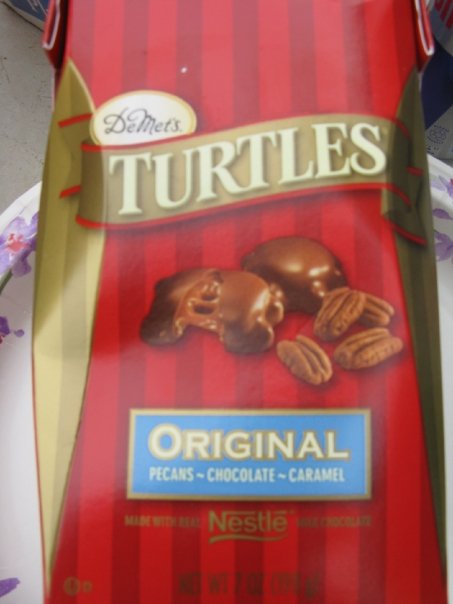 Next week, we face off against the Eastern Washington Eagles.  Anybody got any good Eagle recipes?

So, fun times were had at the tailgates.  Eating food.  Booing random Maryland fans aimlessly wandering by.  Calumbus Bear was in town and had emailed me asking requesting that he be within honking radius of me.  So, he and his lovely wife came by.  They seemed, more than anything, happy to be out of the great state of Ohio.  I can't disagree.  A chance to leave Ohio and go straight to a Cal game?  That's like going from Holmoe to Tedford!

I think if there is one thing we can take away from the tailgating experience, whether you are at a frat party or on memorial glade or in a parking lot or just meandering through the streets of Berkeley, it's that the desire to consume alcohol and steaming meat brings people together in ways no political leader or organized religion ever can.  Yes, from now on, I renounce my Judaism and will be forever part of a ethnicity/religion for which this is our slogan: 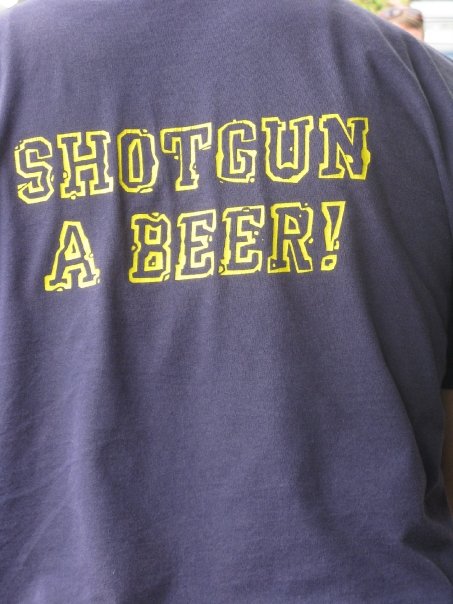 We even have our own national sport! 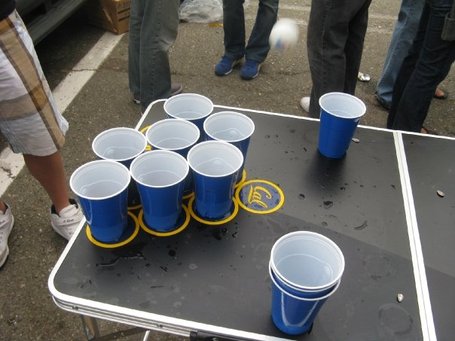 After all the tailgating fun, we went up on the long trek to to the peak of Mt. Berkeley, Memorial Stadium. But finally after our long trek, we got down into the stadium.  It was a mad house entering the stadium, because they funneled everybody through the North tunnel entrance.  They had some sort of special entrance for people, not sure who.  Nobody would give me a straight answer on that.  But I need to figure out how to get through this special entrance and dodge the crowds.

We got into the stadium and came down right by the North Tunnel.  Jamal Boykin was there and now looking at this photo again, I see that Coach Boyle was there, too.  Perhaps hosting recruits: 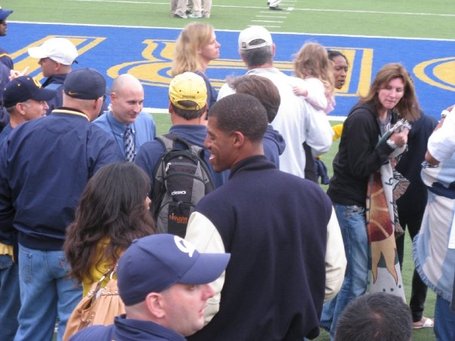 The players were warming up and came together for what I can only assume was a motivation koan.  Or, potentially, series of koans. 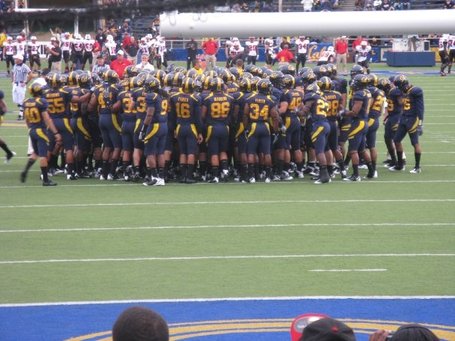 Jahvid Best was strolling the end zone, working on his moves. 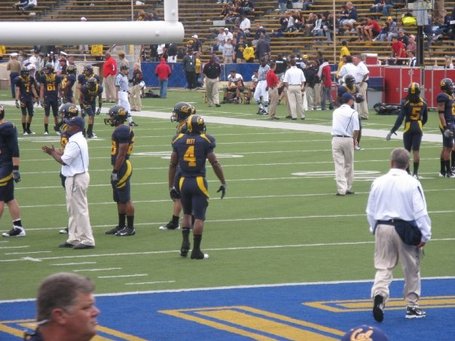 Trevor Guyton and Co. were practicing on the left, getting ready to crush that Turner kid. 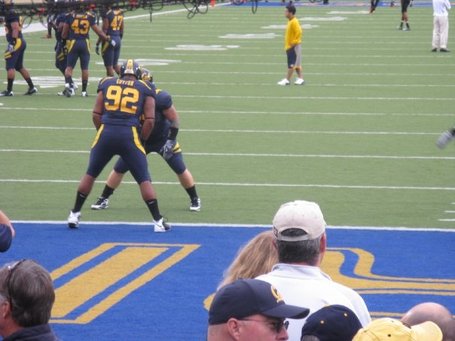 And then who should emerge but Sandy B and her entourage. I wonder which one is her Johnny Drama! 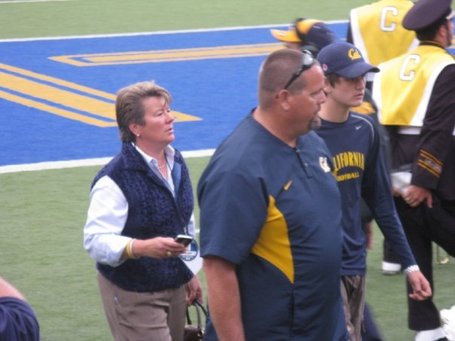 The QBs were throwing the ball around: 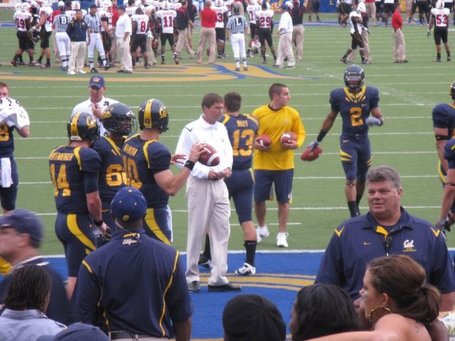 And at least two Tedfords were getting ready to go: 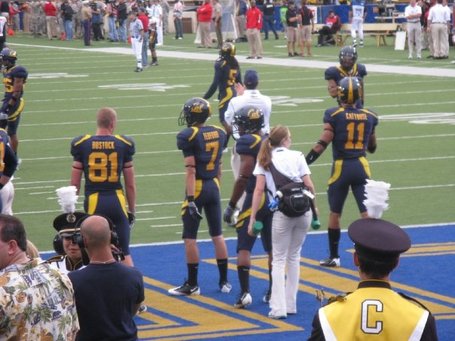 The band was getting prepared the only way it knows how, by having two of its members run maniacally towards each other hoping four inches of metal hanging off their chest manage to touch: 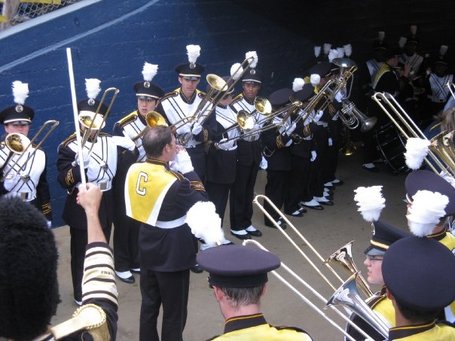 They managed to pull that amazing feat off and Drum Major David Nagle was a happy camper: 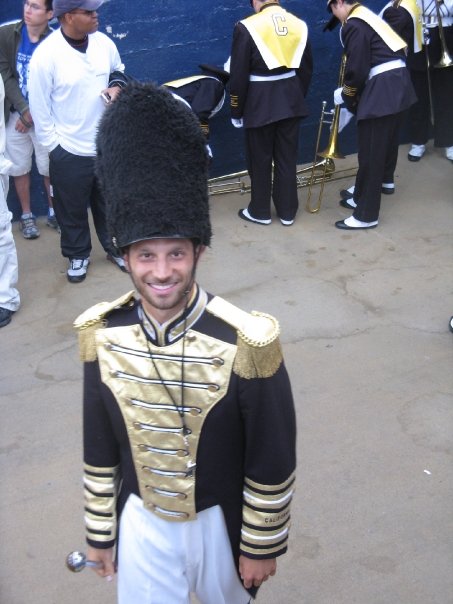 SydQuan was out and about: 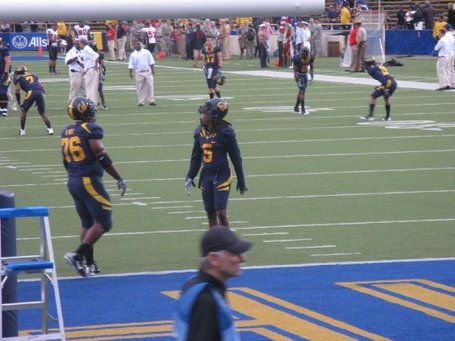 And D'Amato was practicing for his first ever game: 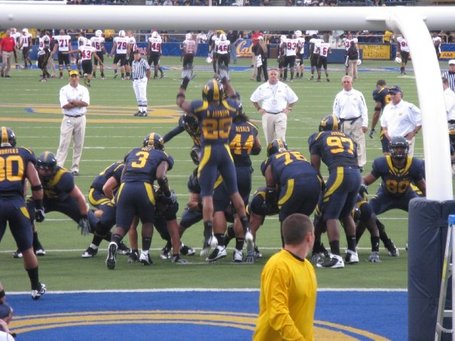 Soon, the practice was over and it was time to come in.  All the players come running in and I discovered an unfortunate situation with my camera.  It was just dark enough that taking photos without the flash would lead to blur.  And with the quick movement of the players, many non-flash photos would come out blurry.  But using the flash would have been useless, because you only have a few seconds.  This is a lesson you'll see over and over today.

But I got a few solid shots: 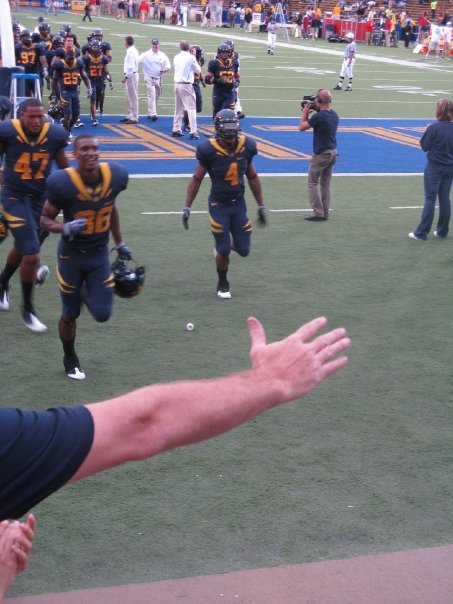 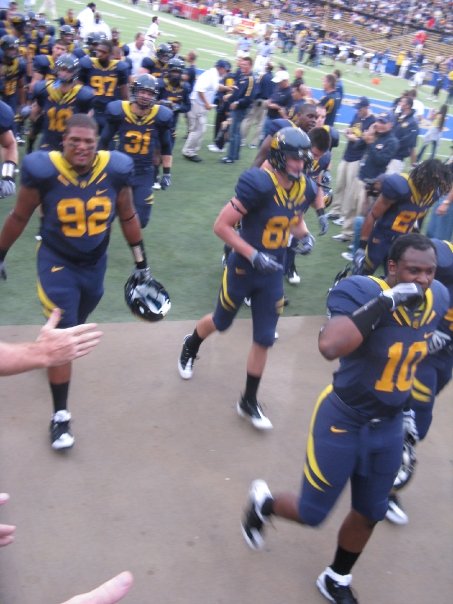 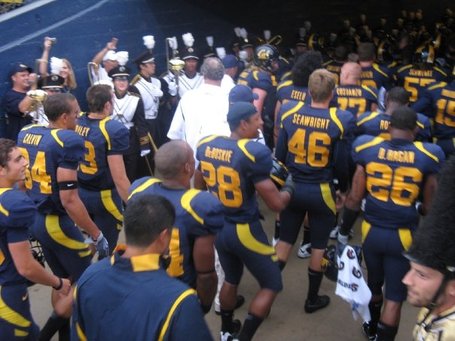 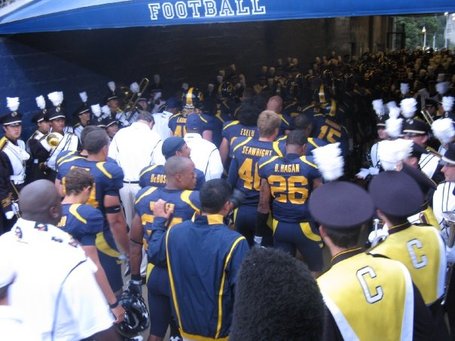 I am not sure if people could read what the Rally Commers were spelling out with body paint.  It was the entire Bear Will Not Quit line: 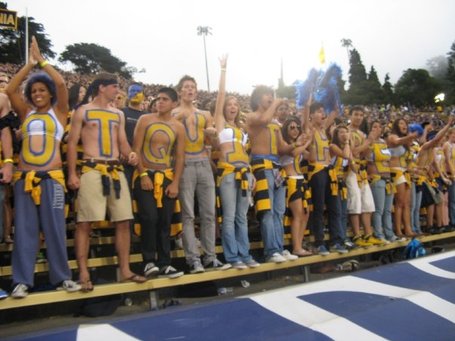 If it was too difficult to read, maybe they should stick to shorter things like "GOBEARS!" or "WINNINGISNOTEVERYTHING;ITISFARBETTERTOPLAYTHEGAMESQUARELYANDLOSETHANTOWINATTHESACRIFICEOFANIDEAL."

So, anyway, ya, that's a solid start.  In part 2, we'll look at some blurry game action shots that were really awesome in person.  And their even better in night snapshot form!  GO BEARS!