The first in (hopefully) a thirteen part series, this is a quick recap of a glorious Cal victory.  Commence reveling!

Reading the local press coverage of our team from the last few weeks, I got the feeling that this team could be good.  Very good.  Despite a lack of specifics due to the media blackout, there was a quiet, understated confidence that permeated recent articles.  Maybe it's simply Okanes repeating his belief that Tedford has more confidence and faith in this team than in those of years past, and maybe Okanes keeps repeating this speculation because he isn't allowed into practice and has nothing concrete on which to report.  Regardless, the message underlying most articles has been consistent: this is a confident, serious, composed, and potentially very good team.

I predicted a Cal victory, but I didn't know what to expect beyond that.  I certainly did not touch the -21 point spread, and I do not know anyone who did.  If you took the recent articles at face value, however, last night's game was exactly what you would have expected.  Cal did what a good to very good team should do - it dominated a mediocre (but not terrible) team in its home opener.  Perhaps last night was the perfect example of the adage "seeing is believing."  All of us had read about how good this Cal team was shaping up to be, but perhaps still held very reasonable reservations - last night we finally saw the team, and I doubt there are many lacking belief this morning.

What a complete, dominant, thorough performance.  The closest comparison I can make is to the 2004 team, which displayed a killer instinct and generally had its games wrapped up before half.  If the operative word is "dominate" (and I've already used it three times), you probably have the makings of a very good team.

On to specifics: here's what stood out last night.

Marvin Jones: After last season, the passing game was understandably Cal's biggest concern entering last night's game, and our number 1 receiver is a guy whom very few of us have seen.  Even though Jones jumped to the top of the depth chart ahead of more experienced players, it is hard to have a ton of confidence in an unknown.  Now we know: Jones is big, fast, can really jump, and, most importantly, has great hands.  Each of his three catches was very difficult - the two slants were thrown high and behind (especially the first one), and his long touchdown was an over-the-shoulder catch, falling down, with a defender right on his heels.  He didn't bobble the throws and made the touchdown catch in particular seem natural, almost easy.  He's the real deal. 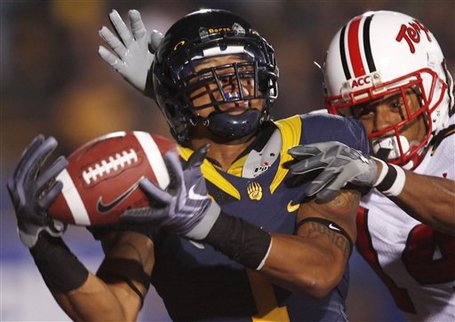 Riley: He started slow - he looked hesitant and missed on his early throws (the only completion was Jones' incredible catch near the goal line).  But midway through the second quarter, he started getting into a groove.  His first great pass was a tough sideline pass to Vereen, thrown over a defender as he was rolling right.  He was out of the pocket again for his great escape/touchdown to Curran.  On the TD strike to Boateng, he showed good patience and mobility inside the pocket and good awareness to throw to a secondary receiver.

It seemed that each series boosted his confidence, which in turn improved his accuracy.  His toughness was particularly impressive, and the physical play clearly made him stronger and more confident.  He stood in and took a big hit while delivery a beautiful past to Best on the west hash, sprung Best on a 40 yard run with a great block, and popped right up after taking a high hit to convert what I think was a third down.  It was obvious to see why the team has rallied around him - he puts his body on the line and takes a hit like everyone else, but unlike many other QBs.  It took him a while to get going and find his rhythm, but by the time he hit Lagemann with a perfect crossing route in the third quarter, he had total command of his team and the game.

Pass Rush: I remember watching spring ball prior to the 2008 season.  We had two potential all conference defensive ends in Tyson Alualu and Rulon Davis, but the guys who jumped out were young backups Cameron Jordan and Ernest Owusu.  They've arrived.  Jordan started several games last year and looked at times like a budding star, but we've had to wait until now to see Owusu, a redshirt sophomore.  He was unstoppable last night, and Jordan and the rest of the defensive line were not far behind.  They made a couple of Maryland's pass attempts seem like screens, with 2 or 3 players almost instantly beating their blockers and greeting Turner before he had a chance to throw.  Maryland's offensive line is inexperienced and not particularly talented, so Cal won't be getting six sacks every game.  With Alualu, Jordan, Owusu, and Jarred Price (the mini linebacker and passing rushing specialist) coming off the edge, however, they'll be getting plenty. 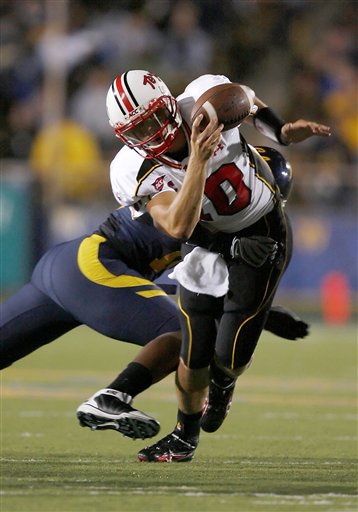 Offensive Line: On Cal's first run of the game, Jahvid Best ran into the defensive line and was tackled...but still gained 5 yards because Maryland's defense had been moved so far downfield by Cal's offensive line.  It set the tone for a very strong, if not dominating performance.  Riley generally had time to throw despite consistent blitzing from Maryland's front seven (and sometimes from their secondary).  He was flushed from the pocket on a number of occasions, but that seemed to result more often from his hesitancy than from breakdowns in pass protection.  The offensive line was even stronger in run blocking - Jahvid Best certainly deserves the attention for his 73 yard touchdown run, and Verran Tucker gets a gold star for great downfield blocking, without coming close to a clipping penalty.  But that run was largely the result of a huge hold on the right side of the line, created by redshirt sophomores Justin Cheadle at guard and Mitchell Schwartz at tackle.  Again, those are sophomores, with a junior at center and a freshman at the other guard.

The rest: In the long run, the biggest positive from this game may be the experienced gained by Cal's younger players.  Cal was using second stringers almost exclusively by the halfway point of the third quarter, often without too much of a drop off in performance (the offensive line was humming with Donovan Edwards and Chet Teofilo manning the tackles shortly after halftime).  We saw at least 7 wide receivers, 8 or 9 defensive linemen, and similar numbers of linebackers and defensive backs.  It should be much the same next week, against FCS Eastern Washington, and developing depth while keeping players like Best, Tepper, Schwartz, Hagan, and Derrick Hill fresh will pay huge dividends down the road.

There are always negatives, even in a 39 point victory, and in this game we had glaring problems in our kick-offs and coverage and what looks to be a bad injury to Spencer Ladner, at a position (tight end) where we are already short on depth.  But (aside from kickoffs ALAMAAAAAAAAR!) this was, to quote myself, a complete, dominant, thorough performance.  This is a Cal team that absolutely looks ready to roll.  Even if you bought all of the hype, you had to be happy with what you saw last night.