Your CGB leaders will be somewhere around the Berkeley area, occasionally Tweeting on Saturday. If you really care about what we're doing on gameday, check us out at our Twitter feed.

It's Saturday morning Golden Bears. Rise to College Gameday, and don't stop watching until the Bears have made the Terps heave their Gatorade. In the meantime, here's a brief look at what you should probably be paying attention to this morning.

I've slowly become a line junkie over the past few years, and this week I'm snorting high on Minnesota's advantages on that front over Syracuse.* Daily Gopher covers why they should be able to manhandle the Orange:

Quite frankly, there is no reason for the Gophers to not leave Syracuse with over 300 rushing yards. The Minnesota O-line runs, in order, 296, 316, 285, 303, and 375 pounds. The Syracuse D-Line runs 234, 293, 273 and 246 pounds. The linebackers are 223, 236, and 216 (what?) pounds. Duane Bennett, DeLeon Eskridge and Kevin Whaley should be hitting the line when the line is 5 yards down the field. I'm trying to figure out how a 234-pound defensive end has any chance against a 6-7, 296 pound lineman like Matt Stommes. He doesn't. The Gophers should be able to run the ball all. day. long against this defense, control the time of possession, and wear out these undersized defenders.

Okay, that sounds good enough. More than enough, actually. So why on Earth is the line only Minnesota -6.5? Let's take a closer look.

*CGB does not support inhalation of substances outside of oxygen, particularly since it's tough to stick a sweaty 300 pound linemen into your nasal cavity without suffocating.

It seems when you look at the other side, The Daily Gopher seems to have its troubles on their defensive front.

Syracuse's interior offensive line v. Eric Small and Garrett Brown - The Syracuse guards and center is really the only place where I would argue Syracuse looks competent. G Ryan Bartholomew (Sr, 6-3, 288), C Jim McKenzie (Sr, 6-4, 284), G Tucker Baumbach (Sr, 6-5, 317) all have experience and actually match up well with Small and Brown. While I think that QB Greg Paulus will have the ability to avoid Minnesota's defensive ends due to his speed and elusiveness, the interior line is much more difficult to deal with. Syracuse has to lock down the interior of Minnesota's line to have any chance for Paulus to have a successful debut

Additionally, when we compare pure recruited talent (i.e. Rivals stars), the picture becomes foggier. Looking at the depth chart of each school side-by-side, they appear to be on equal footing. 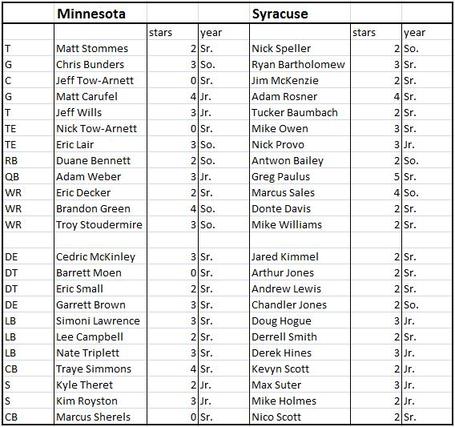 Finally, Syracuse is debuting this famous new quarterback. He used to dunk get dunked on for the Duuukieees! 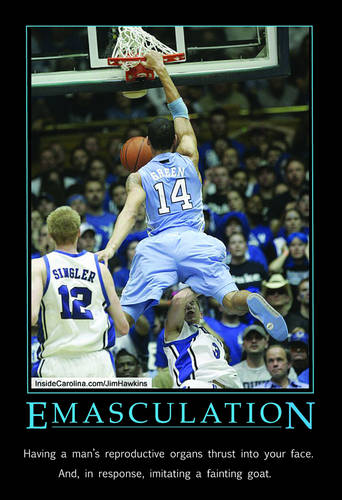 I can't resist the combination of Syracuse football and a Duke basetball player. It's like the ultimate nexus of futility and douchebaggery. Syracuse +6.5 it is!

If you can find this game, more power to you!

Portland State at Oregon State; 2:30 PM EST, 11:30 AM PST, Fox Sports Northwest & Fox College Sports Pacific: Building the Dam's got you covered about how OSU and PSU match up.

You have to like Oregon State's chances come Saturday. There have been question marks at several positions this fall, but the pieces are there. The offensive line seems formidable, there is talent at receiver, Canfield will be leading the crew, and Jacquizz Rodgers is on our side. On defense, the line should be fun to watch, with Frahm and Terry wreaking havoc on backfields, as well as Keaton Kristick and his fellow linebackers teaming together to stop the run. The secondary is inexperienced but a veteran group.

The Beavers beat Hawaii, who ran the same run-and-shoot that PSU does, in 2006. Brandon Hughes and Keenan Lewis were sophomores back then, Colt Brennan and Hawaii gained over 400 yards through the air, and the Beavers still won.

Portland State will go to battle with Drew Hubel, a Corvallis High grad, at quarterback. He nearly threw for 3,000 yards last season, and passed for 18 touchdowns, although throwing 15 interceptions. But without run-and-shoot mastermind Mouse Davis, the Vikings are expected to run the ball more in 2009.

The Vikings started a converted linebacker at fullback for the last two games of 2008, simply because they didn't have anyone else to fill the spot. But this year Glanville feels that they have four players cabable of running the ball, led by fifth-year senior Bobby McClintock.

Translation: Portland State will only lose by 40 or less. Not even going to try picking this one.