Roll On: How Cal's Offense Should Break Down Maryland's Defense

Share All sharing options for: Roll On: How Cal's Offense Should Break Down Maryland's Defense

Note: Should have said this with yesterday's post too, but I encourage you to read this piece-by-piece rather than trying to read it all in one sitting. There's a lot to digest. I'd suggest even printing it out or viewing it on your mobile device, especially if you're at work or constantly on-the-go. Reading long pieces like this online can take way longer than it should.

We talked about Cal's defense versus Maryland's offense yesterday. Now we move to the attack, and focus on how the Bears will try to put up their points.

People are already looking ahead to Autzen and Minneapolis, to a possible College Gameday date on October 3rd, as the beginning of something special. Don't even start with that crap, says Coach Tedford (more diplomatically of course); for the Bears, the season doesn't exist past Saturday.

Cal coach Jeff Tedford says this Maryland group is so different from last year that it is a virtual unknown. That makes the Terps difficult to prepare for.

The big uncertainty is on defense. Maryland has a new defensive coordinator, Don Brown, who has introduced aggressive new blitzing schemes and has his guys pressing receivers at the line.

"I know there's going to be an element of surprise there. There is no background. As far as us playing them last year, they’re not the same team."

Indeed. If Cal isn't prepared to adjust to the defense that's in front of them, the cakewalk many fans aren't expecting won't surface. Just like yesterday with the offense, there are several things the Cal offense can do to exploit Maryland's defensive deficiencies, and hopefully make Saturday's game a decisive affair steering our way.

But they're going to have to deal with a master of attack first. We'll discuss Maryland's new defensive coordinator after the jump.

How do you think Cal's offense should break down Maryland's defense? 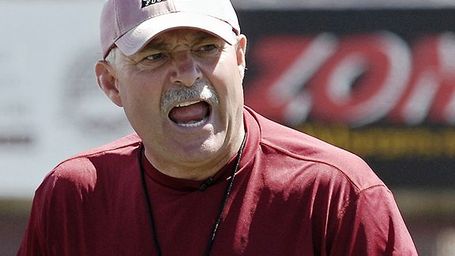 How can I be of service, Don Brown?

With well-disguised blitzes (as well as a creative propensity to adjust from opponent to opponent), Brown's defenses earned a reputation for exploiting any opening.

"Oh my goodness," Wilder said. "I spent a lot of time on him. It was as good a coach as we faced. I looked at it as a great learning experience because if you could block what he's bringing, you can block anybody's fronts. Kids see a base 4-3 with America-zone-fire. That's a piece of cake compared to this two-down, five-man twist Brown brought last week."

Brown's multiplicity is a direct result of acting as something of a pigskin packrat. Every tweaked scheme that helped him win at some stage is stashed away in a playbook he streamlined this offseason with the extra time he is permitted without head coaching duties.

The philosophy, though, didn't change.

"He's relentless," said Miles, who transferred to Massachusetts from Navy. "Every play. One thing he hates is to play zone coverage. He's always [saying], 'You think I want to sit back and watch people pick apart my defense?' He's very intense. He doesn't like to let the quarterback breathe at all."

You can read more on Brown here, here and here.

This has to make Cal fans nervous, because we know how our current quarterback can be a little, uhhh, excitable. A blitzing team could take Kevin Riley out of his comfort zone, so the first quarter or two will be crucial to see how he reads and adapts to the situation. Even with a strong offensive line in front of him, we can't be sure exactly how he'll react to different patterns of attack by the defense. Let's see how much he's grown.

Attacking the blitz with the run

However, I expect the main way Cal will try and diffuse blitz packages will be with the run. As mentioned at the top, Maryland will be blitzing hard, and they certainly have the personnel to give the O-line a rough time if they're not solid in picking up the blitzes.

So what can the run game do? Chris Brown of Smart Football details the ways to tackle the blitz on a guest post on EDSBS.

Man-to-man: For example, for the run game, coaches often try to dial-up inside trap plays where linemen can use the defense’s aggressiveness against it. Relatedly, quick runs to the outside, like a speed option play where if a defender commits to the quarterback he can pitch it to the perimeter. If the offense can design the blocks to get everybody but the last outside defender, and it can then option off him, then the offense is off to the races.

Zone: The run game answers tend to depend on gameplan issues. Where do they blitz from? If you think you can, say, kick out the blitzing linebacker with your fullback and cut inside, then maybe you have a big play. Or maybe the linebacker or safety is actually dropping down and will stuff it. Overall though, some of the same plays that worked against the man blitz can work against the zone, if you can get to the perimeter or break through the defense’s initial front by using their aggressiveness against them.

With Best, the speed pitch would be a lethal weapon to use to counter the numbers directed at the quarterback. Draws or trap plays could work just as well, since Best (and to a lesser extent, Vereen) have the ability to escape the blitzing onslaught with their rapid and agile movements. 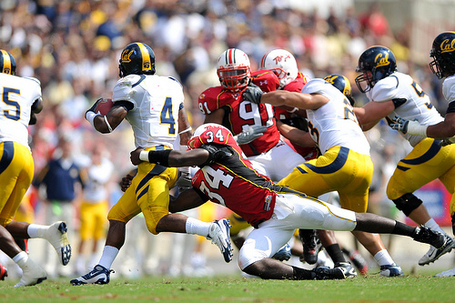 In addition to that, Cal's O-linemen must play great defense. Yeah, you're scratching your heads, huh? I'm all about oxymorons!

Line play was critical on both sides of the ball this year. In the same post on the Maryland defeat quoted above, both danzig and Hydro referred to the Bears O-line being a huge factor in the final result. Here are danzig's thoughts:

I think the primary reason we lost was our OL lost the LOS battle. Our offense is based on running it directly at them… Terps were stuffing the hole early… so we started some zone running to the side and they sliced through the blockers… then we started getting creative and screening etc… they basically took out half of our gameplan. Norris and Chet were not playing well and Mack was just ok. I just think they were dead tired.

Indeed, love Jahvid as we might, he was terribly dependent last season on the performance of Cal's offensive line, particularly Alex Mack. Best's ability to be effective as a down-and-distance running back will be totally contingent on his offensive line's ability to run block and open gaps for him.

Brian Holley and Anthony Miller's ability to pick up the blitz will also be tested; if there are any hidden keys to victory, look carefully at how those two read and react to the linebackers or defensive backs Brown sends their way. How they stand and block against them will be key to letting Best loose and giving Riley the comfort space he needs in the pocket.

Talent and depth at the line will definitely be critical again this season. The offensive line has rounded into form and should be much improved from last year.

Worse for the Terps, Maryland's defensive line is arguably their weak spot, with only six starts shared between the four man front.

Senior Travis Ivey, a 6-foot-4, 325-pound defensive tackle, is Maryland's most experienced lineman with four starts. Senior Deege Galt will start at the anchor position while senior Jared Harrell and sophomore Derek Drummond will split time at defensive end. Unlike last year, when the group was expected to free up space for the linebackers, it's expected to push up field and make plays in the new scheme.

Last season both Maryland's O-line and D-line were able to overwhelm their Golden Bear adversaries at the line of scrimmage to set one run game off and left the other to flounder. Based on talent alone, the reverse should be true this season.

Countering the blitz via passing

Here's the way I look at blitzing: The whole art of blitz is to make defenders the aggressors; likewise, the Bears offense must be ready to counter such attacks before striking right back. Attacking immediately could lead to a rash decision and accomplishes the goal of the defense to unsettle the quarterback. Conversely, sitting back and waiting will force the quarterback out of the pocket and away from rational decisions, making him prone to even further mistakes.

At the same time, blitzing can be a defense's rapid undoing if they're not careful with the ways they employ it. Selective and/or random blitzing techniques can disarm and diffuse an opponent. Blitzing constantly can do you in, especially facing a team that's solid at pass protection.

Considering Coach Brown uses the blitz on over half of his plays, look for Cal's more experienced O-line to try to handle the green D-line, wear them down, and then envelop them with either quick rushes or exploiting mismatches in the secondary or between the stripes.

The whole art of war consists in a well-reasoned and extremely circumspect defensive, followed by a rapid and audacious attack.

~Napoleon Bonaparate, (quote from The 33 Strategies of War)

Back to the quarterback 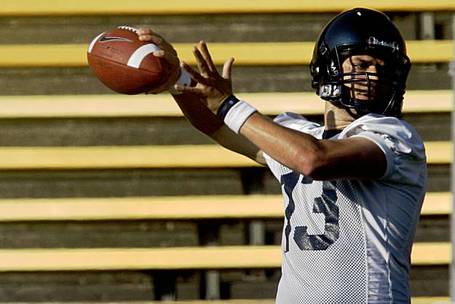 A lot could depend on the way our new OC meshes with Riley in game-time situations. In our interview with SD Golden Bear, he emphasized that Ludwig could take advantage of Riley's mobility and try maximizing his options.

If Ludwig brings some more multiplicity to the offense, there are going to be bigger openings from mismatches and blown/missed coverages, and plays are going to be made in the passing game.  And more short, rhythm passes should mean more completions.  Those plays (and more experienced receivers) tend to give QBs confidence.  Like any QB, once he's confident, Riley should perform better.

In short, Ludwig will try and make sure Riley doesn't cradle that ball. Get it out quick, get it out early, keep him from making too many mistakes. Hopefully, this will improve his ghastly 44.3% completion rate on 1st down, where making quick passes are essential in the West Coast/pro-style offense Tedford has managed for years.

Against a blitzing team, Riley needs to be considerably better to keep the Terps from focusing all their attention on Best. Verran Tucker and Marvin Jones's ability to run routes will be crucial; if they struggle, I wouldn't be surprised to see any of our numerous wide receiver reserves called on.

Blitzing is a good quarterback's dream, especially if his protection is ample. All signs point toward Riley being much-improved from a weak 2008 campaign. If our starter can show command in the pocket, if he can respond to blitz coverage and identify the open man, if he can improvise on the fly and complete the short patterns, even use his mobility wisely...if he can do those things, his start to the season could be auspicious, even spectacular.

But if he gets excitable, if he isn't able to complete the short reads, if he struggles out of the gates like he has the past two seasons, you'd better start wringing your hands, Cal fans. It could be a very very tense season.

Additional notes: Maryland defensive previews from Scout, Kroichick from the Chronicle...Tedford talks about the element of surprise with the Washington Post...The Bear Will Not Quit's excellent Maryland defensive preview...Maryland's defense has made 50 picks in camp, how much of that is due to poor offensive play can't be calculated...Testudo Times believes Maryland's defense will be improved from last year.