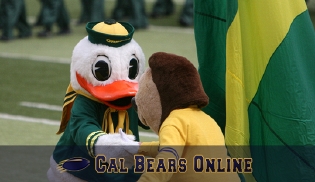 "Let this be a gentlemanly victory!"

IT'S SATURDAY MORNING BEARS! Who among us isn't terrified like hell drunkenly excited to start the conference schedule?

There are other games on the Pac-10 slate; all of them are on some form of TV, so you should get your chance to watch them (of course, if we lose, I expect all of you to go into a 24 hour mourning period, and by mourning, I mean more beer). Pregame/first quarter thread will be up at 11:45 AM!

This is probably just as big a game as ours, at least in terms of figuring out what both of these teams are like. Here are the perspectives from both sides.

Nick Foles is Arizona's new QB, and AZ Desert Swarm is excited about their future with him.

Nick Foles couldn't muster much offense either throwing 6-11 for 55 yards and a TD. His opportunities were limited by the time it got to him. There was no chance for rushing anymore and he still managed to get a score. Foles TD throw to Criner was PERFECT. Can't wait until next week.

rvm of Building the Dam is also wondering about how effective their team will be at getting at Foles.

Question Four: Defensive line: Can they continue to get pressure on opposing quarterbacks, but come up with more results? Tony Pike was adept at side-stepping Beaver blitzers, and I’m not sure the man Arizona will run out onto the field—Nick Foles— will be nearly as good in that respect. How many sacks are you looking for tomorrow?

More quick looks after the jump.

This game will give us a good sense as to how good the Sun Devils are against quality opponents. House of Sparky did an interview with SECRivals, mentioning how their Lou Groza award winning kicker Thomas Weber is out 4-6 weeks, and also how important the front seven will be at silencing the mob in Athens.

With the addition of true freshmen Vontaze Burfict and Corey Adams, ASU’s defensive unit has received a boost in athleticism and ability. Combined with Lawrence Guy, Dexter Davis and Mike Nixon, and we see the core of a foreboding front seven.

ASU’s secondary is a real concern with AJ Green roaming the field, but adequate pressure on Joe Cox will be the key to limit Green’s effectiveness.

It seems we're not alone in terms of bad special teams. In an interview with House of Sparky, T Kyle King of Dawg Sports notes that one of Georgia's weaknesses is directional kickoffs.

Where do I begin? The Bulldogs commit too many turnovers and are flagged for too many penalties, many of which are of the "rookie mistake" variety rather than of the "playing aggressively" sort. Although the run defense is stout, the Georgia D is fooled by too many play action fakes. The secondary has failed to take away the deep ball, often getting caught out of position, and the middle of the field frequently is left open, much to the delight of opposing tight ends everywhere. The Red and Black have surrendered 37 or more points in seven of their last twelve games. Georgia’s kickoff coverage is a mess and directional kicking often sends the ball out of bounds to give the other team good starting field position, anyway.

Big game for the Huskies to show they're not out of tricks after playing their hearts out against the Trojans. John Berkowitz (who writes outstanding game previews), breaks down every facet of UDub v. Furd. He believes Jake Locker and the Huskies can definitely run on the Cardinal, based on their Wake Forest performance.

Stanford has an active front seven that is used to facing a power running game each day in practice. They held SJSU to only 26 yards on 28 carries last week. They didn't do so well against Wake Forest. They gave up 250 yards and that was the tale of the game. They just couldn't figure out the Demon Deacon offense which is pretty tricky.

Washington has been able to run against everyone this year. You would think that LSU and USC would have been able to hut them down but they didn't. The Huskies haven't had any big plays yet but they do pick up big yardage on first down which has helped the offense become one of the national leaders in third down conversions.

Chris Polk is the best looking Washington back in over a decade. He has all the tools. He can catch the ball, run with power, and he has the speed to break the long one. What has really set Chris apart this fall has been his ability to make yards after contact. Polk carried the USC line for valuable extra yards last Saturday.

The last time Jake played in Palo Alto he had a field day running the football. If the coaches decide to give 10-12 pre designed running plays he is very capable of picking up 70-100 rushing yards against the Tree's.

Since the Furd doesn't have an SBN blog, I'm going to visualize what exactly their preview would look like. 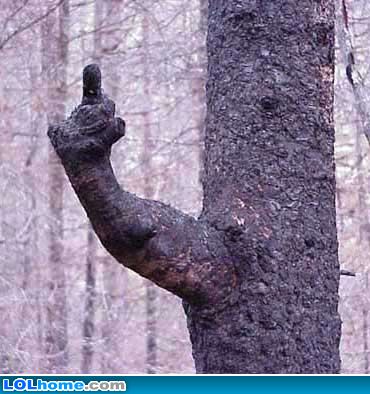 That wasn't very nice, was it?

This game makes me sad. Even sadder that THIS is the Pac-10 national telecast this week.

Coug Center (who has been churning out quality work, go to their site and see all the great position analyses they're handing out!) at least tries to make humor of it. Nuss comes up with this jewel.

The Trojans are in trouble if

They notice that Sandra Bullock and Keanu Reeves are on their bus, because that means it’s about to get suddenly commandeered by Dennis Hopper.

Other than that, I think they could turn the ball over on every possession and still figure out a way to win.

At least James Montgomery is healthy. Get well James.

Conquest Chronicles hasn't even bothered with a preview, instead reviewing the shocking upset from last week and blowing apart overblown media anger with the Trojans. One Trojan fan at about the 50 yard line in Husky Stadium dissected the way USC's OC was interacting with Aaron Corp. Could Matt Barkley have been ready to go on Saturday?

Bates: yes some discussions with Corp occurred, but not that much. Contrary to some reports, it wasn't like Bates was constantly trying to handhold Corp through the game. Bates did a lot of standing and watching quietly. Not a heck of a lot of talk with PC. He didn't talk hardly at all with Barkley. The rest of the coaching staff interacted with the players and each other in what could be termed as "normal" or "as expected" - the Defensive staff was very energetic like usual.

Corp: he was really just alone in his little hell that game. Bates had some conversations. But not many, fewer and fewer as game went on. PC barely talked to Corp. Teammates pretty much left him all alone save the occasional passing word with a pat on the back or helmet. Almost no "leader"-type interactions with his line or individual players, the spirit-boosting "come on troops!" stuff we've become used to from SC QBs including Barkley. Most of the 3rd and 4th quarter Corp hung his head and stared at the ground or crossed his arms and stared into space. Then when it was time to take the field a quick word from Bates and off Corp trotted. When Corp returned to the sidelines rarely did a coach go up to him to discuss the series that just finished! Just left him to stand there until the next series.

Barkley: sorry to disagree PC even though I love and trust ya, but Barkley was ready to go and was dying to play. In the 3rd Q he pulled his helmet on and never took it off. He was jumping, smiling, moving up and down the bench talking to everyone, slapping them on the pads, making them laugh. Pumping them up. He did his damndest to catch PC's and Bates' ears. He was one of the only persons to go up to Corp after each series and talk to him, though it seemed like Corp didn't want to talk much and Barkley seemed to respect that, keeping it brief. Barkley threw the ball with zip on the sidelines. He carried a football with him constantly, tossing it from hand to hand as he watched the game. He showed as much energy and spirit as the Defense. Barkley acted like an SC starting QB should act. He was doing on the sidelines what Corp should have been doing on the sidelines.

All those games start up after ours though. There will be a link to a second open thread later on for the late afternoon/evening slate. Enjoy Gameday and the morning slate before we get to cooking duck!