Golden Nuggets: Dancing with the Bears

Share All sharing options for: Golden Nuggets: Dancing with the Bears

On a wildly different note, today's post looks ahead to tonight's portion of Dancing with the Stars, featuring one of the greatest athletes in Cal history, Natalie Coughlin!  She dances at 8:50 during tonight's broadcast.  ABC has a brief bio of her on their DwS website.  Her partner is Alec Mazo, who also graduated from Cal.  He moved with his family from Russia to the Bay Area when he was 12.  His specialty is Latin dancing and he was partnered with Kelly Monaco when they became the first ever Dancing with the Stars Champions in the show's inaugural season. If you want even more info about the show (such as a list of other participants) go to ABC's Dancing with the Stars website.

Fans may cast their votes for Coughlin and Mazo via telephone on Tuesday nights during and up to 30 minutes after the "Dancing with the Stars" performance shows. Their official voting number is 1-800-VOTE4-13 or 1-800-868-3413. 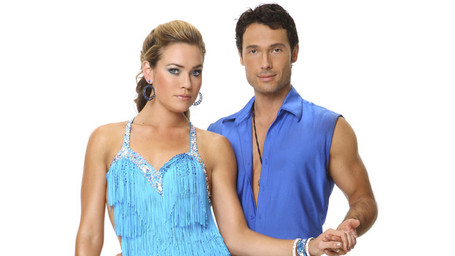 Go Natalie! Show the world that Bears can dance as well as they can swim, earn Nobel Prizes, and run over tromboners in the Stanford band.

After the jump we have quotes from Tedford and Riley at today's press conference, Wilner's assessment of Cal and Pac-10 quarterbacks, Oregon news, updates on past and potentially future Cal football players, and a smattering of other stories.

Many thanks to chicagoaubear for providing torrents of this weekend's past game as well as an HD Cal-Maryland torrent.  Keep seeding, guys!