Reveling in Victory - Cal wins on the road!

Share All sharing options for: Reveling in Victory - Cal wins on the road!

The third in (hopefully) a thirteen part series, this is a quick recap of a glorious Cal victory.  Continue reveling!

The last time I witnessed a Cal victory game away from Memorial Stadium, Steve Levy was our quarterback.  We had an all-american center, but his name was Marvin Philip, not Alex Mack.  It was the 2005 Vegas bowl, and following the game I was served free cocktails as I made a hundred and fifty bucks at various blackjack tables.  Saturday night's post game celebration may have been a bit less glamorous (driving around my former Twin Cities stomping grounds, drinking Grain Belt Premium at Sally's, the country bar on campus), but this victory seems equally important, and a bit more surreal.  I had my picture taken with the scoreboard in the background, just to prove that this rarity - a road victory - actually happened and that I was there to see it. 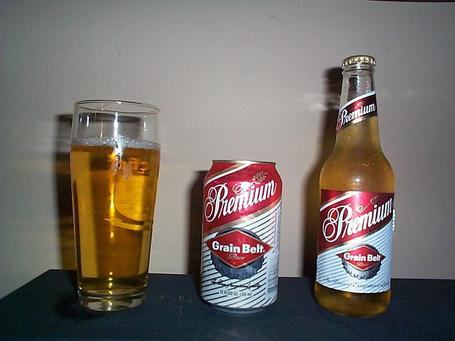 "Premies," proudly endorsed by local waitresses: "I like them better than Miller Lite."

For three quarters, this game followed the same disastrous formula I witnessed at Ucla and Stanford back in 2007.  Due to my job, I arrived late and missed early Cal touchdowns in each instance (my job also pays for my flight, hotel, and tickets, so don't shed any tears for old CBKWit).  I received word that Cal was up by 7 as we were leaving the hotel, and heard noticeable roars followed by the announcer's subdued report of Tucker's 50 yard catch and Best's second touchdown as we walked to the stadium.  I arrived at my seat in time to see Cal force a punt, and remarked to my dad that Cal could essentially end the game with a third straight touchdown.

Much like those games in 2007, Cal did not score that touchdown.  Eventually Decker got the Gophers into the game with his spectacular catch while getting absolutely CRUSHED by Cat-house - from the video screen in the stadium, it looked like Decker bobbled the ball as he was falling, which would make it an incomplete pass since he landed out of bounds, but a closer look on espn showed that he somehow held on.  That guy is a player. 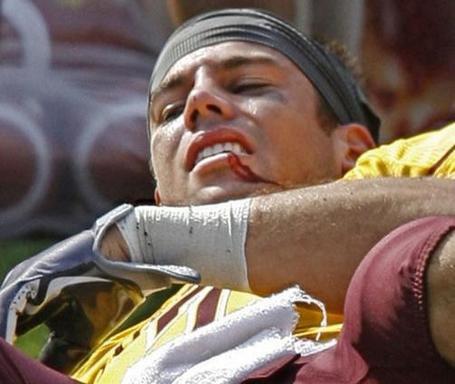 Cal responded with a third Best td (I started yelling "touchdown! touchdown!" when he was at 25; the hole opened by the left side of the line was big enough for me to gain a few yards), but predictably gave up a score to the Gophers 40 seconds before halftime.  When the Cal defense dominated Minnesota to start the second half and force a punt, only to have the terrible kick take a funny bounce off Cat-house's back and end up as our first turnover of the year, I informed my Gopher friends that they had now seen true, authentic Cal football.  It continued throughout the third quarter, Cal drives stymied by a phantom holding call on Tepper and an inexplicable trip by Vereen in the face of another huge hole (this time I ate my words after seeing the opening and shouting "first down" just before he fell).  A Minneosta drive was elongated by an even worse PI call on a very active Cat-house (I've long liked Ezeff for his strong play at the beginning of the 2007 season, but Cattouse and Johnson are our best safeties right now), perhaps a little hometown payback for his monster hit on Decker.  The Gophers tied the game at the end of the third, and every Cal fan in the stadium was thinking "Not again."  None of us said "I can't believe it's happening again," because we've all seen it happen so many times.

I entertained those thoughts for most of the third quarter, but a strange, unfamiliar wave of calm washed over me after the Gophers tied it up and the game moved into the fourth.  I am hardly an optimistic person, but I felt very confident that Cal would prevail.  And unlike in those road games I attended in 2007 and those road games I watched in 2008, where Cal had held the lead for most of the game only to wilt at the end, they did.

Riley's 3rd and 16 completion to Jeremy Ross was the play of the game, the difference between this year's team and the Cal teams of the recent past.  It is obvious that Riley and the receivers can now make plays consistently that Cal simply couldn't and hasn't since Longshore's injury at Oregon, but the difference is more complicated and profound than simply completing passes down the field.  This team has toughness, cohesion, and composure that it hasn't had since the 2004 squad.  This manifests in blowouts of inferior teams at home and the ability to win tough games on the road.  I would have liked to see Cal close out Minnesota early when they had the chance, and I would have liked to see better playcalling and execution in the third quarter when the Gophers were selling out to stop the run.  Minnesota often left its corners in one-on-one coverage on the outside, and instead of completeting quick stop routes for 3-5 yards on first down, we missed an inordinate amount of passes and were frequently faced with 2nd and 10.  A lack of offensive execution left the defense out to dry, and the Gophers tying touchdown was almost inevitable.

Still, it's hard to win on the road against decent to good teams (and the Gophers certainly fall into that range), much less to win with style.  It's loud.  The ball takes funny bounces.  The homer refs exert a huge influence, killing your drives, extending theirs, and flipping field position.  Minnesota came back to tie the game and had the crowd at their back, seeking a third straight late game victory.  They gave Cal their best shot, and Riley calmly stepped up and put the ball right on the money, in the soft spot of a two-deep zone between the shallow corner and deep safety.  Ross caught it, something he doesn't always do (see his drop in the endzone against Eastern Washington a week ago), and dragged the Gopher defenders for another 10 yards.  The game was over.  Cal throttled Minnesota for the last half-quarter to win going away.  It wasn't Ezeff's great hit at the goal-line to win at Oregon in 2007 - Cal didn't let this game come down to the wire.  The Bears asserted themselves and left little doubt about the outcome.

The question now becomes, can the Bears do it twice in a row?  Few would contend that Oregon has a better team than Cal, but Cal's superior performance so far is not really the issue.  This Saturday's game will likely be determined by Cal's ability to recover from a fluky turnover, to fight through an awful call, to execute with a hostile crowd on its feet.  Cal has struggled in these areas over the last few years, but they gave notice three days ago that this year's team is different.  If they maintain their heretofore nearly impeccable composure (and of course stop the run, goad Masoli into another terrible passing performance, and dominate the line of scrimmage), our Bears will come home 4-0. 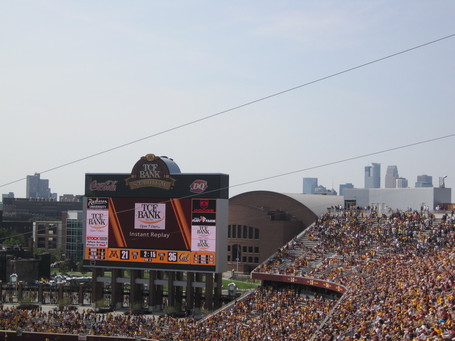 A road win - they do exist!