What Are the Greatest Golden Bear Running Back Performances?

Share All sharing options for: What Are the Greatest Golden Bear Running Back Performances?

VOTE FOR JAHVID BEST FOR AT&T ESPN ALL-AMERICAN PLAYER OF THE WEEK (click here for instructions)!

"Jahvid is a speed reader. He finished Atlas Shrugged in an afternoon." ~JahvidBestFacts

Rushing isn't all about yardage. Well, okay, it is all about yardage, but yards in some game mean more than they do in others. Jahvid Best's five touchdown performance on Minnesota might not have brought as many highlight reel passses the way the first two games this season have, but it's the biggest of his three because of the circumstances. Cal hasn't won a road game, Cal is a bad road team, Cal chokes when it matters, etc. etc. This time, Best played great when we needed him, getting the touchdowns to put us up early and late, at both the goal-line (pleasant surprise) and in the open field (not surprising at all).

So this afternoon, before we gear up for Oregon, let's pause and take a look at your Cal history banks. What  Cal tailback performances have stirred up similar feelings of clutchness and productivity?

Here's my personal top 5 (keep in mind my Cal fandom only extends to 2004; I'd love to see plenty of performances from before that time). If you like any of these ones a lot, feel free to copy the performances I share below in the comments, we'll probably see some overlap. 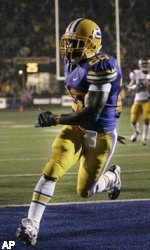 Yeah, it was in a loss, but it was the first time I ever really thought, "Wow, Forsett could actually be a pro back." I'd always though he'd max out in college before that game, but his ability to elude and break what were essentially pro tacklers in USC's front was so impressive I . Not to mention he was able to block blitzes from those powerful Trojan linebackers for the ailing Nate Longshore. Niners fans got a taste of the havoc he will soon unleash yesterday.

I really didn't feel any hope we'd win this game after our performance the previous four weeks. But Forsett (and a little bit of Hawk) made me feel otherwise.

Here's the top 4 after the jump!

When you go 52 yards for a game tying touchdown in the 2nd half, when your quarterback is playing with his hands wrapped tightly around his throat, when you're trying to win for the first time in Autzen in nearly two decades, and you go for nearly 8 yards per carry, you're definitely worthy of the top 5.

This was about the time Jahvid Best took over our 2008 offense. Our season could've 2007ed if Jahvid didn't decide to make this game his. Big props to Alex Mack and Will Ta'ufo'ou for opening up big enough holes for Best, and Tedford finding creative ways to either misdirect the defense to focus on Best or get him the ball in ways that  eviscerated the defenders who could not cut and jive their way with him. 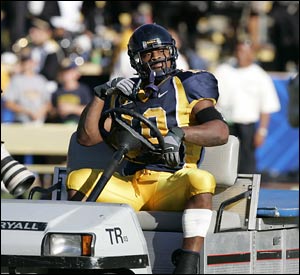 Twist references this game as The Passion of the Christ. He leaves out the part about Jesus rising to heaven on a tripped out injury cart.

This was the biggest clutch performance I've seen from perhaps any Golden Bear the past five seasons. The Bears were about to get Longhorned out of the Rose Bowl, and Arrington made the case not only for Cal to get to Pasadena, but also for him to enter the Heisman discussion. He ripped apart Southern Mississippi when the passing game started to falter, Geoff Macarthur broke his leg, and Aaron Rodgers was having trouble completing half his passes.

You can tell a true Cal fan from a poser if you ask them who the most important player on that 2004 team was. Their answer should incorporate the number 2018 into it.

My history of Cal football is exceptionally short. Old Blues, enlighten me and other youngins about the greats that preceded us!