Bear Down: How Cal's Defense Should Stop Maryland's Offense

Share All sharing options for: Bear Down: How Cal's Defense Should Stop Maryland's Offense

(This is the first of a two part series; offense today, defense tomorrow. For all the latest SBN stories on Cal-Maryland, click here!)

Maryland could actually be more stacked at the skill positions than they were last season. Their quarterback is entering his senior campaign. Shouldn't we be a little bit more afraid of the Terps's offense, knowing how their offense slashed and dashed their way around us this season?

I'd say the answer is yes and no. Here are several key factors to this game that I'll elaborate on after the jump.

What do you think Cal's defense should do to stop Maryland's offense? 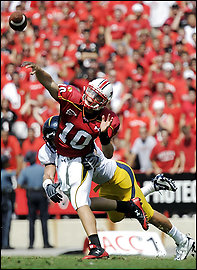 Don't let Chris Turner break you down: I wrote this after last year's game.

I don’t know what was up with surfer dude turned quarterback Chris Turner, but he played out of his goddamned mind.  He was six for six on 3rd downs, getting five first downs (including on a 3rd and 9, 3rd and 12, and a 3rd and 16). Either way, it reflects badly on the defense.

His excellent performance against Cal though, appeared to be an anomaly--against ACC competition he averaged a 56% completion rating, which is barely passable. After looking at the stats and his overall season numbers, I'm getting a clearer picture as to why he was so good against Cal.

Thus, it is imperative not to spot Maryland an early lead. Turner becomes a more efficient quarterback and he gets more comfortable with taking risks. I guess the analogous term would be being the chipleader at the poker table, a lot of people would relax and be a little bit more dicier having the edge. Turner went all in against Cal last season and it paid off.

Force him to come from behind, Cal defense. Then see what he's capable of. 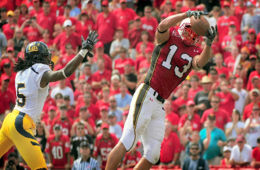 Zone in, or zone out? As stated before, a lot of Maryland's success came over the middle. Hydrotech talked about this after last year's game.

Zone coverage.  Our zones were getting picked apart pretty darn well today.  But there's not a lot we can do really other than get a faster pass rush, and perhaps have better anticipation on passes.  Because we got picked apart in zones necessarily mean we should switch to man?  Not really.  There seems to be a huge dislike of zone coverage by many Cal fans.  The reasoning seems to be that zone coverages don't work.  Well, today they didn't, but zone does work and has in the past in previous years.  In fact, I wouldn't be surprised if more than 50% of our INTs in the past 3 years were from zone coverages rather than man coverages.

Despite the loss of Darrius Heyward-Bey and Dan Gronkowski, Maryland's receiving corps is deceptively deep. Torrey Smith will be Maryland's primary weapon, having caught 29 passes last season, tied for 2nd on the team.

Smith flashed his potential last year as a redshirt freshman, starting the season’s final six games. In addition to setting the ACC single-season record for kick return yards, the 6-foot-1, 200-pound Smith caught 16 passes for 235 yards and a touchdown over the season’s final five games, including eight catches for 115 yards and a touchdown in the regular-season finale against Boston College. Smith has also consistently tested among the fastest receivers on the team, with a 4.36 time in the 40-yard dash, behind only Lee-Odai and McCree.

Also, Adrian Cannon seems to be the best Terp at short-range. So if we're looking for a short-range target who will be targeted to break down the zones, he could be the one.

Thus, due to the deep receiving corps, I wouldn't drastically change the approach we used in defending the pass. Turner's performance in breaking down the zone was, as Charles Barkley likes to say, "better offense beating good defense". Tip your hat, shake his hand and move on.

What I might recommend is occasional shifts in personnel. Mychal Kendricks and D.J. Holt are unknown commodities and we don't know how good they are in defending the pass at this point. Expect Cal to occasionally shift into a 3-3-5 on passing downs, utilizing the talent of the deep secondary, bringing in someone like Chris Conte or Sean Cattouse to try and disrupt the zones Turner was so effective at breaking down last season.

Another possibility is trying to turn Turner away from the middle and into the teeth of the experienced secondary, either by going in the flats or progressing deeper downfield. Although Maryland's receivers are probably talented, outside of Smith they lack the experience to deal with Thompson or Hagan on one-on-one coverage. Heyward-Bey and Gronkowski. However, the downside to this is that the Terps have plenty of speedy receivers who have the ability to break the coverage.

Hence, it's unlikely we'll see a huge difference in the way Bob Gregory approaches this game. They'll just have to count on Turner not being perfect again. Probabilistically, the advantage is with Gregory. 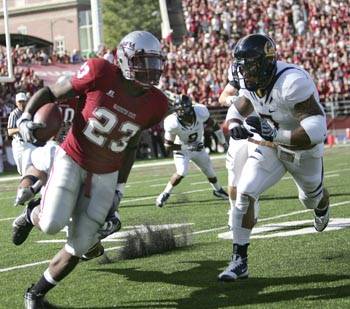 via www.dailycal.org (Image from Nathan Yan)

Who's the back? Da'Rel Scott did most of his damage early on (89 yards on 19 carries, 2 scores). Even though he settled down as the game went along (half of his yards came on the first series of the game), he set the tone on offense for his team. Without his contributions, Cal doesn't play tougher to defend the run, and doesn't make the back eight more vulnerable to Turner's probing. So I'd say he was just as valuable in the victory as Turner.

However, there is one thing worth mentioning. Scott has been a TERRIBLE road running back.

In his four conference games last season he rushed for 105 yards combined, averaging out to a woeful 1.84 yards per carry. His lone 100 yard rushing game on the road came in that infamous loss aganst Middle Tennessee State. To be fair, he was playing pretty good rushing defenses (Boston College was 6th at rushing defense YPC, Virginia Tech was 17th, Virginia 40th, Clemson 42nd), although his numbers were still well below the average rushing performance against those opponents. Considering that he'll be playing on the road against a very good rushing defense, these are positive sticking points for Cal in being able to settle him.

Which is why I'd focus on stopping Davin Meggett. Once Scott went down with an injury in the third quarter, Meggett took over and ran at an even faster pace (82 yards on 13 carries). Given that they'll both be splitting snaps, we should keep a close eye on whether he can be more elusive and able on the road than his counterpart.

Davin Meggett has virtually pulled even with Da'Rel Scott, who rushed for more than 1,000 yards last season, in the race to be Maryland's starting tailback, offensive coordinatorJames Franklin said Thursday night after the team's final preseason scrimmage.

Franklin's comments were surprising because Scott rushed for 1,133 yards last season and was an All-Atlantic Coast Conference selection.

It's not that Scott hasn't played well, but rather that Meggett, who had a solid freshman season with 457 rushing yards, has improved, according to Franklin.

"Meggett has improved probably as much as anybody," Franklin said. "I think we've got two No. 1 tailbacks, and we're going to use them as such."

That's why in this game I'm more concerned about Meggett than Scott. Although his numbers aren't great on the road either, the sample is far more limited, so you can't really draw any conclusions. I'd prefer the enemy I know over the one I don't. 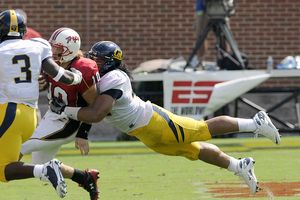 Return the favor: All that being said, Cal fans should be optimistic about their chances to stop Maryland's skill players. Why? Their offensive line from a season ago is gone.

[Senior center Phil] Costa, who moves over from left guard, is one of the Terps' few known quantities. Another is hulking left tackle Bruce Campbell, whose academic issues from the spring are no longer a concern.

The three have combined to play in three career games, almost exclusively after the outcome was decided.

Thus, we have an inexperienced right front going up against the seasoned Cameron Jordan and the talented Trevor Guyton. I like the sound of that.

Costa and Hill will probably be tangoing most of the game, so that leaves us with how Alualu will handle Campbell. I'd be surprised if the Bears didn't try any of these things.

1) Take Campbell out of the picture by rushing a linebacker or a d-back to the blind side, forcing Campbell to pick up the blitz and putting more pressure on the young Lewis to go one-on-one with Alualu.

2) Selective pressure on the right front. Maryland's Achilles heel on offense is right here. You can expect the Terps won't be running much right off-tackle like they did last season.

3) Drawing from (2) force the Terps toward the middle and away from the edges. Expect Maryland to employ a Cal 2008 strategy of running up the middle behind their veteran center and hoping to bust open some holes. Hopefully the new linebacking corps will be up to the challenge of taking down Scott and Meggett.

4) You actually might not see much additional pass rush. Cal's D-line did an excellent job causing havoc last season on their own, sometimes mixing in a linebacker or two to overwhelm offensive lines. Even against Maryland's experienced o-linemen, Cal managed four sacks on Turner and seven tackles for a loss. It's likely you'd see similar, perhaps better numbers this season, even with Follett gone.

Remember when the Maryland defensive line took advantage of an inexperienced Cal front? It's time to return the favor.