Share All sharing options for: Q+A With Testudo Times 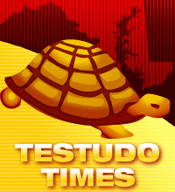 Well, we got the big Maryland game coming up soon.  So, we figured we'd turn to the resident Maryland experts on the SBNation blog network, Western College Hockey Blog.

But they turned us down, so we turned to the next knowledgable Maryland SBN blog:  Nascar Ranting and Raving.  And they said yes, but then never followed through.

So, now we have turned to the one, the only Testudo Times.  Hopefully they can answer your questions after the fold and help us better understand this muti-faceted enemy that we face this weekend.  Also, we answered some of their questions here, so check it out.  GO BEARS!

Da'Rel Scott killed us last year.  Tell us why he will/won't do so this year.

Maryland’s offensive line is a huge unknown. It is without a doubt the scariest area on this team for me. It’s very young and very inexperienced. If it’s where I think it will be, Da’Rel Scott won’t kill you. If it’s better than I think it will be (which is possible – they’re talented, just not experienced), Scott still won’t kill you. At least, he won’t be alone when he does it. If any killing is done, it’ll be as much Davin Meggett as Scott. Other guys, like Gary Douglas or true freshman Caleb Porzel might pitch in as well.

Since our fellow Cal Sports blogger Bears With Fang asked you one of our infamous questions already ("Who is one player on offense and defense from Cal that you could choose to suit up for the Terrapins for the opener?"), let us ask you a variation of the question.  First of all, pick your best player on offense and defense for the Terrapins.  Now, if you had to choose one to suit up for the Bears instead of the Terps, which of the two players would it be, and why?

Sorry about not refusing to answer that question. I should be meaner next time. Anyway, I’m pretty confident the most talented players on the team are Da’Rel Scott and OLB Adrian Moten. In that case, I’d give you Scott in a heartbeat – he’s not better than Best, so not a lot of damage would be done, and Maryland has a replacement not far behind him at all. There’s not much depth at linebacker this year, and Moten – aside from being very talented – is a team captain.

How much will we see David Meggett play against Cal?

David Meggett is retired, so unless he attends the game and ESPN does a bunch of camera cutaways to him after every play (like Ray Rice’s mom), you probably won’t see him at all. But you’ll see Davin Meggett, his son, quite a bit. Probably as much as you see of Da’Rel Scott, actually. Ralph Friedgen and James Franklin have both said that Meggett has played just as well or even better than Scott in camp, and that they’ll split carries a decent amount. Maryland has experience doing this, and if it’s done like it has been before, expect Meggett to be the sole back every other two drives or so. 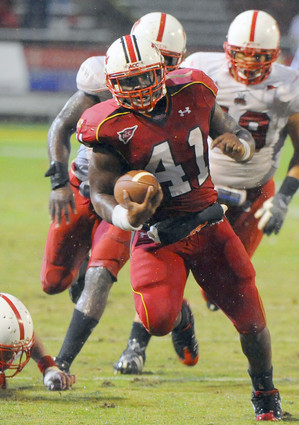 Recently, Maryland named a "Coach In Waiting" similar to Oregon.  Is there any concern about this or are fans happy to have a succesor already lined up?

There are some concerns about it, mainly because James Franklin – the CIW – is yet to prove himself here, either in recruiting or in games. He was heralded as a WCO-type of offensive genius, but is yet to show that. He was supposed to be a godsend in recruiting, too, but the returns have been average. That said, most people seem content with the selection. It was done as a way to keep him on-board – he almost went to the NFL as a coordinator – and Maryland probably couldn’t hire a better coach, so you might as well lock him up.

How would you describe the play of your quarterback Chris Turner? Was he really as good as he looked when he played against us?

Turner is definitely that good in big games. When Maryland plays a ranked team or in an otherwise big game, he’s damn near flawless. When Maryland plays Middle Tennessee State or UVA, it’s a completely different story. Turner is a classic example of playing to the level of the competition – in this case, you should probably expect exactly what you saw last year – an accurate, competitive leader who hates to lose.

What are you expecting from Maryland's defense now that they've lost seven of their starters? What do you figure will be the gameplan to stop Jahvid Best now that the Terrapins don't have the advantage of humidity or homefield?

The defense itself should be actually improved. The players Maryland lost weren’t really vital to the success of the team. I loved Jeremy Navarre, Dean Muhtahdi, and Bemi Otulaja as much as the next guy, but I can’t get all that disappointed about losing a FB-turned-DT and two walkons, especially when they’re being replaced by former four stars. In other areas, like safety, the player replacing the starter from last year should actually be better. And though we technically lose a starter at CB in Kevin Barnes, he missed the second half of the season with an injury anyway. Throw in a defensive coordinator who actually knows what he’s doing (Don Brown is replacing Chris Cosh), and the reports of the defense’s demise are exaggerated.

There are two options to stopping Best. Maryland will either do what they did last year – stop the run at all costs and hope the passing game can’t beat us – or let new defensive coordinator Don Brown use his Jim Johnson/Philadelphia Eagle-style blitzing defense, throwing a ridiculous amount of different looks in the hopes that the offense will get confused. Your guess is as good as mine.

Thank you very much to the guys over at Testudo Times with their help on this.  GO BEARS!

How do Testudo Times' answers make you feel about the upcoming Maryland football game?