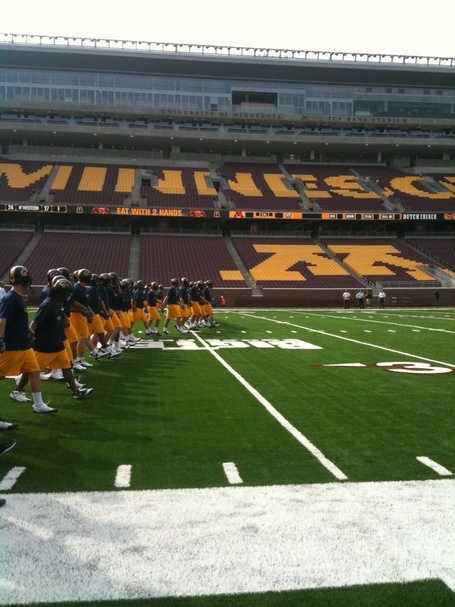 via img24.yfrog.com (Thanks to Adam Duritz for the pic!)

IT'S SATURDAY MORNING BEARS! Use this thread to discuss all the pre-game and First Quarter action of the game against the Minnesota Golden Gophers. Also, don't forget to vote in our CGB Insta-Poll.

Per Jon Okanes of the Contra Costa Times, Cal fullback Brian Holley, who was suffering from a concussion, is warming up on the field. Good news!

Plus (!!), we did an interview with another Minnesota blog from Sweden or some such thing. Walk On Boy is their name. Our answers to their Qs are here. Their answers to our questions are behind the fold.


No fucking clue. Back in our hey-day, I'm thinking that there was a time we wore all gold {See last couple times out.} And no, there is no such thing as a Golden Gopher. It's a sort of chipmunk. I'm not proud of it. But that's the way things go.

Is it a bad thing when the first thing that comes to mind when I think of Minnesota college football is Craig T Nelson barking at Jerry Van Dyke?

Yeah, had to google that. Coach for the uninitiated.

Not at all. I mean yes, yes it is. And I'm greatly offended. I played from 2002-2005 when we reached four bowl games and no one really cares, but take a boat right off to fuck me off land. Science. Even though we were solid when I played there, we need to improve for people to take us seriously on the national stage. Perhaps we should be - FUCK, I just spilled snuff all over me. Seriously, Irish snuff all over the goddamn place. I took a snoot and kept on keeping on.

Who's the greatest Golden Gopher I've never heard of?


Bronco Nagurski. That's old school shit. He picked up a plow and whatnot. To show the coach where some other stud apparently supposed to live.

If you've heard of him, then we'll go with Bruce Smith. But not that Bruce Smith. The white one. He won a Heisman.


Let's say Jahvid Best just happens to be a Cylon and has unbelievable super strength and an unyielding belief in a monotheistic deity. Would that make you guys switch to the 3-4 or what??


Sure?? But maybe, we'd switch to a 22-49-11. Would that be a decent enough defense? Or should I pick three more random numbers to throw on the field?


Kevin Riley was recently quoted as saying "Yes, can I have a double-double, animal style." Is this the sort of bulletin board material that you think could inspire Minn to the upset?


No one who is from the Midwest has any idea what an In-N-Out is. Although I've heard that it's all sorts of delicious. Could you FedEx one toward Minneapolis way in about two weeks? That would be great. But anyone eating anything named a double-double, animal style is impressive and should be commended. Although I'm still terrified of Jahvid Best, I want to have a beer or nine with Kevin Riley. Throw in a double-double, animal style.


Between the Vikings, the departed North Stars, and the Timberwolves, where do the Gophers rank on being heartbroken by their Minnesota sports teams?


Um, to be real honest most Minnesota fans are real fair-weather. I would say Vikings {Gary Anderson}, Wild {They care much more about hockey.}, Twins {And all the ladies love Mauer.}, Gophers, and Timberwolves {At least the Gophers give them some hope before they tear their heart out.}


You've watched Caddyshack. Is the gopher the star of the film?

No, Carl Spackler. I'm all sorts of drunk and distracted now. I need to go.