Roll On: How Cal's Offense Should Attack Minnesota's Defense

Share All sharing options for: Roll On: How Cal's Offense Should Attack Minnesota's Defense

For those who want to look at a breakdown of Cal's defense versus Minnesota's offense, click here.

(Note: I tried to bold sentences that you should pay attention to in this preview, so if you just want to quickly hit through the main points, focus on the bold stuff. Like this.)

Here are the three distinct ways an offense attacks any defense:

1) Establishing the run and testing the ability of the front seven, which will help set up the pass.

2) Establishing the pass by testing the secondary, which would help set up the run.

3) A balance of playcalling between the two areas, where neither pass nor run have a huge emphasis in the early going.

Against most teams, many Cal fans would probably opt for the former. Cal's run blocking has been a cornerstone of their success and this offensive line has proven that they're equally as capable as their predecessors. Jahvid Best and Shane Vereen can break games wide open by accumulating huge yardage in big chunks, turning close games into wins.

I'd also expect a majority of Cal fans to go for balance. It's the logical move. You really want to keep the opponent guessing and adjusting play-by-play, and I figure that this will be the option the Bears end up taking Saturday morning.

Me on the other hand? At the outset, I'd like to risk it and try out the second option. I'll elaborate why (with video evidence) after the jump.

How do you feel Cal's offense should operate versus Minnesota?

I wish I could put some hard-hitting analysis on Minnesota's defensive scheme and come up with a great and innovative way to beat them. I can't. They run a pretty simple defense, as The Daily Gopher discussed in our Q&A yesterday.

The defense is basically the exact same thing as a year ago. Cosgrove came in as co-defensive coordinator and inherited a defense that was bringing virtually everybody back, so the plan all along was to keep things as similar to 2008 as possible. We run a 4-3, we are strong at DT and LB as those guys have done a nice job against the run through two games. The secondary has a couple solid corners and then the safeties so far have been better against the run than the pass but they haven't been tested all that much yet.

Ugh. Boring. Looks like I'll have to resort to our favorite cliches, "Talent" and "Execution". We have plenty of talent. Can they execute?

Indeed, Minny's run defense has been pretty solid. They're allowing 3.51 yards per carry through two games, and although they gave up 261 yards total to Air Force, that's pretty average for the triple option crazy Falcons. It's not crazy to think our running duo of Lightning and Lightning will have a much tougher go against the Gophers front seven, which, as of last week, sports all seniors, including the fierce Lee Campbell down the middle.

Here's a video of their tackles for loss against Air Force.

You can see how big that defensive line is. The average weight of a Gopher D-linemen is around 280 lb, which puts them a little bit over the mean of Maryland's linemen. Based on the decent pressure the Terps got on Riley in the first half, Minnesota should have their opportunities at rushing Riley out of the pocket; it'll be up to him to make the right decisions when he's on the run.

As for run blocking, I doubt we'll see too much variation from the tactics we saw against the Terps. Hydro clarifies the type of run schemes we showed against Maryland.

Against Maryland in 2009, Cal used both zone running and used some of its classic power running game too. The amount of zone runs and power run plays were roughly equal so I suspect that Cal will be a more balanced run team in 2009 with respect to whether they are using zone or man blocking.

I'd be interested to see if Ludwig will set up plays for Best so that he maximizes his speed against the lumbering Big 10 defenders, or if he tries to put him in a power back situation and matches power with power. Given the creative ways they've showcased his abilities the past two weeks, I doubt we'll see him revert to a pure down and distance runner.

Look for a few wrinkles early on, like Jahvid lined up at the LoS or streaking down the sidelines. Nothing is really conventional with the Jet. Let's hope Minnesota isn't the first team to expose weaknesses in our O-line and a possibly groggy Brian Holley.

Let me get back to why I like option #2. One reason is tactical, the other is strategic.

I've always liked the maxim of hitting your opponent where they're at their weakest. I'm always a big fan of this, especially in college football, and it's a bonus if it's early in the season. Oregon did this to perfection in last year's Civil War. They ran to the edge, met little resistance, and continued to do it unfettered the rest of the night.

In this case, the Golden Gopher front seven is stronger than their secondary, so I'd like to direct our attention away from that area. In this case, play action is the way I'd go.

A weaker secondary begs for play action or play fakes. If you can get the secondary to bite on the fake, whether you're selling the run or pumping for a screen or intermediate read, you can own them. When your running attack is as good as Cal's, it leaves the secondary vulnerable, and Minnesota's secondary is vulnerable.

When you watch the above vid, you can see the corners biting on either the first read (like Paulus on his touchdown throw), or on the playfake (the two Air Force plays). If Riley can sell the playfake early on with Best (and Minnesota's defense will be aiming to stop Best, they'd be foolish not to) in the back, I feel he might have a chance to nail Jones or Tucker downfield for a few quick scores.

You also see Minnesota's corner playing well back on the second clip--if this is any indication, Minnesota drops back in their coverage on long down situations in order not to give up the big play. If Cal can get away from the strength of the defense and hit the secondary over and over, that'll force the linebackers to drop into coverage more.

As for grand strategy-wise? This game could also tell us whether Kevin Riley is capable of leading the Bears to early scores.

For all of Nate Longshore's deficiencies, he was competent at leading the Bears to an opening first quarter score, or at the very least getting the Bears offense clicking early on (it was later in the game that was the problem, but we've discussed that enough). Riley has thrown three touchdowns in the first quarter in his college career, and only one of those was on a true scoring drive (vs Oregon in the rain). The other two came off a long Best kickoff return (Oregon St.) and an interception by Syd'Quan in the red zone (Washington State).

The Jet has been responsible for many of Cal's early scores the past fifteen games, and we should be thankful for having the luxury of a player who can make our offense look great with just one or two plays. However, when Best gets stuck against a physical defense that can seal and contain, it's been up to quarterback play to bail him out. There was precious little of that help last season.

Thus, it'll be crucial for Riley to develop his rhythm and timing from the opening kickoff rather than working his way in as the game goes along. His ability to get Cal's offense moving early and often will be critical to our success later in the schedule, because Pac-10 defenses have seen us too much to be overwhelmed by our running game. You need balance to win a conference championship, and Riley has to start providing that balance for Cal to gain those accolades.

If he can start showcasing an ability to pick apart secondaries game-by-game, it'll go a long way towards making him just as deadly as Best in the backfield. Remember the last time we had a duo like that? Think it was five years ago...

This strategy does have its flaws (if Riley struggles our offense could be mired in mud longer than it needs to be), but if it works, it could pay off huge dividends going into conference play. 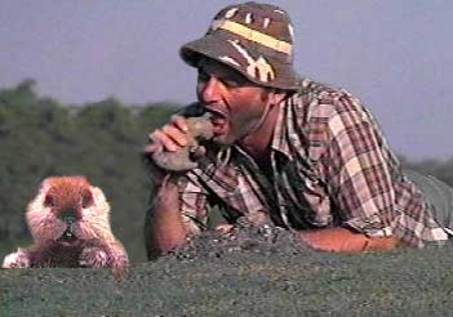 And that's all she wrote.