We'll look at Cal's offense versus Minnesota's defense tomorrow. (Big ups to danzig for cutting the Minnesota videos for the two part preview!)

You know how we talked yesterday about opposing defenses wanted to force Riley into 3rd and long situations? I couldn't come up with a better way to describe what Cal's defense should do to Adam Weber.

Weber is an excellent precise, accurate passer...on the first two downs. He threw around 58% in the first two games this season on first and second down, but on 3rd down dipped to 48%. That isn't just an isolated occurrence. Last season he completed over 67% of his passes on 1st and 2nd down, but only went for around 48.7% on 3rd down. The Gophers have been an awful team on 3rd down these past few seasons, going from 36th in D-I schools in 2007 to 96th in the country in 2008, to around 87th in the country through the first two games. Not a promising sign for a team with its toughest games ahead.

Let's take a look at the gametape of Weber from the first two games this season. Based on the video below, what do you see?

One thing I see is Weber throws his passes a little too early. Whether he's rushing the throw, whether he feels the pressure is coming, or whether his throwing motion is a little off...all of those factors lead the receiver to being a step short on his route, and forcing him to lunge for the ball. See how many times in the clip above the receiver has to lay out to try and make a play on the ball on 3rd down, and contrast that to the other downs where the receiver catches the ball in stride.

What do you guys feel like Cal's defense should do to break down Minnesota's offense?

Danzig's thoughts on the video, plus more things Cal fans should look at are after the jump.

Danzig noted: "Weber doesn't look off receivers... I mean, never. Really... never. He's got a cannon of an arm, but I guess he's only accurate when he can track his receivers." Indeed, you can see a few defensive backs getting plays on the ball and the route. On 1st and 2nd down, Weber has time because the defense is half expecting the rush, half expecting the pass, so they can't fully commit to the receiver until they're sure it's a pass. On passing downs, with Weber telegraphing his throws, defenses have a definitive edge to counter the limited QB mechanics of Gophers.

With those two things in mind, I see Gregory doing several things we didn't see in the first two games.

Cal should try their best to force Weber not only into 3rd down situations, but also to guard tightly against the 1st and 2nd down throws. Weber is deadly accurate here because either run or pass is a likely possibility, completing his passes at a 66% clip the past two seasons. So the Bears will have to be more aggressive in how they defend the pass theree; they can't play the straight zone they utilized versus Eastern Washington or Weber should pick them apart given the opportunity.

Also, expect a lot of three man rushes in passing situations and dropping our linebackers into coverage. It has never been Gregory's tendency to blitz on 3rd down, and I don't see that changing up Saturday. He might shade a linebacker into medium coverage for the screen passes that have SHREDDED Cal's defense in the first two games, but we'll probably see plenty of zone coverage, although it shouldn't be as soft as we saw on Thursday. If the Bears are going to get anywhere against some of the West Coast/pro-style offenses in the Pac-10, recognizing the screen and swing passes is crucial.

Want one more interesting stat on Weber? After completing about 60-65% passes in most of the field, in 2008 and 2009 he's completed only 42% of his passes in the red zone (although he has the majority of his TDs here). Look for Cal to defend against the run and dare Weber to test his accuracy in this area. 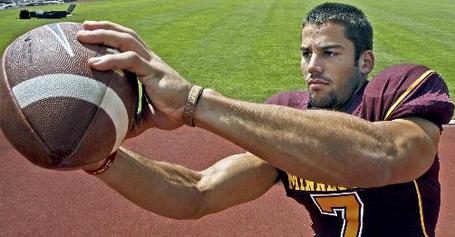 Will Squid go one-on-one against Decker?

There's a third thing I didn't mention that Cal's secondary and linebackers could utilize to their advantage. The receiver in that video was always Eric Decker.

danzig sent these additional notes on the Weber-Decker relationship.

When Weber rolls to his right, he always throws to Decker who is coming back for the ball. 99% of the time. In these two games, this rule was broken only once.

When rolling to his left, he doesn't go to decker... but it is very rare that he rolls to his left. Seen this twice.

Decker caught about a third of Minnesota's passes last season, and he's caught about a half this season. That doesn't include all the times he's been thrown to. Now, we shouldn't take anything away from Decker, who has been one of the most productive receivers nationwide (2nd in receptions, 3rd in receiving YPG this year, 21st in receptions & 17th in receving YPG last year). But even Daily Gopher seemed worried about Weber's tendency to lock onto his main man.

Adam Weber is going to get Eric Decker killed in the Big Ten season. HE HAS GOT TO STOP THROWING TO HIM ALL THE TIME. Worst indication of this: Hayo Carpenter (another wide receiver) came in in the second quarter and BLOCKED FOR DECKER ON A SCREEN PLAY. Anyone else see something wrong with this? There is no way teams with solid secondaries, such as NU, UW, OSU, PSU and Iowa are going to let Decker beat them, so it's imperative to develop Stoudermire, Green and Carpenter more than we are.

Syd'Quan Thompson did not have his best week against the Eagles, so he could be looking for redemption against Decker. However, Thompson is giving up SIX INCHES to Decker (5'9" to 6'3"). That's a huge disadvantage for a corner. We could Weber try a lot of fade routes or elevated throws over the middle that could take advantage of this weakness.

So how well Cal's safeties play will be critical in defending against Decker's abilities. Expect either Ezeff or Johnson to be shading Decker a lot, especially if Weber is staring down his favorite target or moving on the go. They have to do their best to keep him from breaking into open field, and also to make sure they don't provide him too much of a buffer for him to catch passes in the flat.

Hopefully we'll see the secondary and the linebackers monitoring whether Weber is staring down Decker, or if he gets rushed or flushed out of the pocket, in turn leading to a likely throw to Decker. If they can do all of that, we might get a few more of those interceptions they've been missing from the first two weeks.

Attacking the strong right side.

You might be able to see above the dominant part of the Golden Gophers is the right side of their front, with Matt Carufel (Notre Dame transfer) and Jeff Willis combining for nearly 700 pounds. It's safe to say Cameron Jordan has his hands full this week, and we might see plenty of Trevor Guyton and Ernest Owusu alternating to that side to give Minnesota all the fresh bodies they can handle. On the touchdown run against Syracuse and the long run against Air Force, you see those behemoths open up the side through containment and leave the running back with the inside hole or the outside lane.

Thus, it'll be crucial for Tyson Alualu and Derrick Hill to get penetration on the more vulnerable left front. If Hill is able to push Minnesota's center Jeff Tow-Arnett around (Hill does have 14 pounds more on Tow-Arnett), that'd allow for linebackers like Kendricks and Holt to get inside and stuff the holes the right side opens up. Mike Mohamed (who has been playing a lot along on the right side) will play a big role in trying to seal the edge.

Wrinkle: The Wildcat. Minnesota has used the Wildcat this season, with a mixed bag of results (two first downs, one decent carry, one huge loss, and a fumble). Marquis Gray is usually lining up at quarterback in this formation. Unless he hands it off, he's either asked to run up the middle or off tackle depending on which way the blockers are moving. We might find out if the Bears have better lateral speed this season, since it looks like the Gophers like running to the corners.

Beware the second half adjustments.

If Cal jumps to an early lead, don't start planning for Eugene. Decker and the Daily Gopher both concur on this one.

I think offensively, coming out in the first half and getting more consistent drives put together. Obviously putting points on the board will help. You know, we finished well in both games; (we) had to come back from behind to win those games. That shows a lot of character about this team.

So how about the offense?:

Indeed, Minnesota has been a strong second half team this season; they seem to start slow before getting on track. If Cal is spotted an early lead, the Bears not only need to execute their defensive gameplan. They'll have to be ready to adapt to whatever the Gophers come up with coming out of the locker room.

And if they fall behind? Well, it's up to the offense. That's for tomorrow.