On The Road Again: How Can Cal Overcome Their Away Struggles?

Share All sharing options for: On The Road Again: How Can Cal Overcome Their Away Struggles? 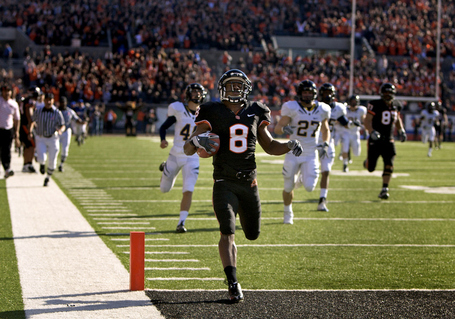 via photos.oregonlive.com (Image by Thomas Boyd of the Oregonian)

5-11. That's Cal's record in their last three seasons on the road.

Of those five victories, three were double digit decisions. Another involved an onside kick and garbage time scores. Only the Oregon win was a true road victory. On the flipside, the Bears have had a good chance to win over half of the games they lost.

Winning on the road has been the difference between Pasadena and purgatory. Things are going to have to change in 2009, or we're headed for the middle level again.

Why do you feel Cal has struggled on the road? Do you believe our road struggles will carry over to this season too?

After the jump, let's take a look at some things Cal can do to start winning away from Memorial.

So what can Cal do to perform better on the road? Let's break down each key in the most boring way possible--with numbers! (all stats again courtesy of the wonderful CFBStats): 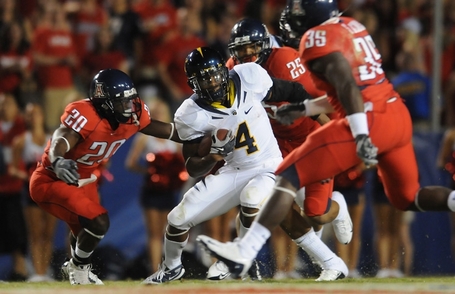 via www.dailycal.org (Image from Nathan Yan)

California is a simple team to figure out. When we rush the ball well, we win, and when we don't, we lose. As HolmoePhobe pointed out in his excellent fanpost, the Bears are 0-8 when we don't rush for 100 yards. Although it feels like a bit of a "duh", if you dig deeper you can find similar useful points. Ragnarok has talked about how one such point concerning rushing success rate, I'll be looking at a more generalized stat, the YPC.

Rushing yards per carry is one of my favorite simple football stats (right along with completion percentage) because it can tell you a lot about how well a running game is going in terms of overall process. 300 yards is nice, but if you rushed the ball 70 times to get to that it's probably not as impressive. Cal has been very good at not just production but efficient production, getting their yards in huge, game-changing chunks.

(By contrast, the peaking 2004-2005 teams averaged under five yards per carry only three times, bust still won two and nearly won the other, the famous SC '04 game! It should be noted that those 2005 teams that averaged over five yards per carry in every game didn't necessarily win either, but ineptitude in the passing game invalidated most of those offensive balance numbers from that season.)

If Best and Vereen can get solid run blocking these next two weeks (and it really all comes down to run blocking, it was the difference between good run game and bad run game in 2008) and find the right holes, then maybe we can start seriously considering the Bears as true contenders. Until then I'm monitoring those three to four yard carries with gritted teeth. 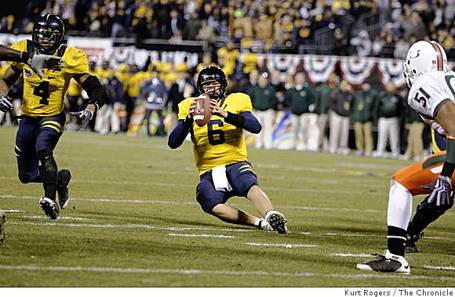 via imgs.sfgate.com (Image from Kurt Rogers)

Converting on 3rd down

There's really no getting around how bad the Bears had gotten at converting 3rd downs last season. Take a look at the last set of stats on 3rd down conversions and how home and road percentages have diverged.

Yeah, you saw that. We were next to last in the country at keeping road drives going. That's some serious FAIL right there folks.

There are some positives. It should be noted about last year's painful 2008 3rd down numbers is that they had to pass a lot on those downs. The Bears passed 113 times on 3rd down but only ran the ball 47 times. It was for good reason. 88 of those 3rd down situations required getting seven or more yards for a first down.

Why is 3rd and 7 so important? Well, Cal generally rushes five-six yards per carry a season, so you don't expect them to run the ball in situations greater than that because a first down isn't likely (they only ran it fifteen times last season, picking up the first down twice). Defenses can generally sit back in the pocket, drop their linebackers and look for the pass.

The early stats for 2009 are encouraging. The Bears have only rushed for 14 yards on 9 carries, but they do have a perfectly respectable four first downs and a touchdown. Even better, on third down the Bears have converted 8 of 14 3rd down passes for first downs, which places them somewhere in the top 20 so far.

Although the numbers on 3rd and long are about the same, you can see the drastic improvement in short yardage situation. Even better, you can see that the Bears have gotten the majority of their downs in 3rd and short/medium yardage. So while we're seeing the same limited success in long yardage situation, the frequency of 3rd and long situation seems to have signifcantly dropped off.

If we can keep those stats going the rest of the season against tougher opponents, Golden Bear fans will be impressed with how smooth our offensive engine hums. 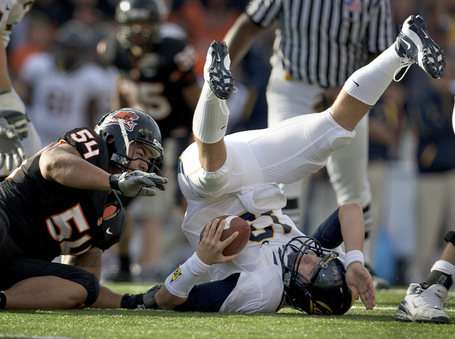 The most sobering fact about the road losses is that they haven't really been blowouts, or decided early. Cal has lost many of those games in the 4th quarter.

In their last sixteen road games, Cal has won the 4th quarter scoring battle a mere five times, and only once did it result in a Cal come-from-behind victory (Oregon 2007). One of those was a loss (a mere field goal put up in the Big Game 2007). The other three were blowouts for us (Wazzu 2008), or padding points to make the scoring margin look respectable (Tennessee 2006 and Maryland 2008).

So if Cal gets into a close matchup (and you'd expect at least one of these next two to be close), it's likely to be on Kevin Riley to bring Cal back.

“This year, we have way more experienced players,” Riley said. “We kind of know what to do going into it. We’ll be ready for this game. I have no question about that, especially after last year, going to the East Coast and coming out flat and playing a bad game overall (against Maryland). We’ll come out ready to play from the first snap.”

Although we'd like to say he has comeback ability based on an exhibition bowl game and his impressive performance against Oregon State 2007, and that he's thrown seven touchdowns and two interceptions in the 4th quarter...he's only won one game coming from behind.

Additionally, he's only completed 46 of 97 passes in the last fifteen. That's 47.4% of his passes. JaMarcus Russell threw a better percentage on Monday Night Football. And JaMarcus Russell sucks isn't very good yet.

Obviously the dropoff in receivers had something to do with that, but it's clear his mechanics had something to do with that too. Now, we've seen plenty of Riley this season to know that his mechanics have taken a step up, but he has not been impressive in the first quarter, and we haven't seen him face a deficit all season. There's a good chance that in the next two weeks, against decent offenses and putting up bad first quarters, they'll be playing from behind.

So if defenses are able to stifle the run game, can Riley lead them back? That's a question all Cal fans should take into account these next two weeks.

So let's just say I'm more concerned than most Cal fans seem to be about this game. I guess it's what happens when the Bears are on the road again.