Yay!  Another Cal victory.  I always love these C games.  No stress.  Just relax in the stands.  Chat with friends and anybody in a 14 row radius of me foolish enough to make direct eye contact.  So foolish.  So, so foolish.  Honestly, I could go for like 6 of these a year and then the Big Game.  And if these 1-AA teams become too stressful, let's just start picking on high school teams.

Although for all the fun of Saturday's game (and it was a LOT of fun!), there was a period of time when I've never been so frustrated at a Cal game before.  For all of the games we lost during the Holmoecaust, for all of the times we saw Ayoob QB that Cal team, I've never been as frustrated as during Saturday's game when the security guards were attempting to kick about 1,000 people out of a section.

But more on that later.  The day started where all Cal games start.  With a pre-game tailgate.  Of course, in Berkeley, we tailgate a little differently.  It's not necessarily about the rate of speed of alcoholic intake or even the most savory of all the cured meats.  It's about the artistic expression of your food preparation.  Don't worry, Tweedledamn, we tailgate in the spirit of Berkeley sometimes.  Like something from the Alphonse Berber gallery, I present the newest piece, Kabobs In Lettuce. 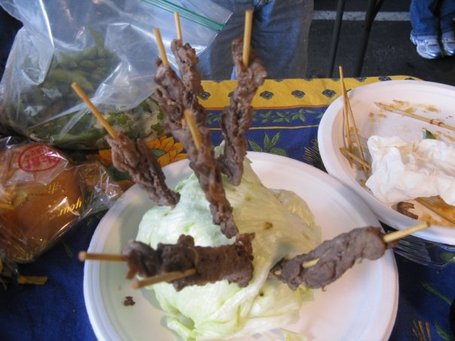 Kabob In Lettuce has a feeling of being rebellious, anarchic, highly idiosyncratic and, some feel, rather nihilistic.  Many see it as abstract expressionism.  It is particularly poetic and highly prescient in relationship to Lyrical Abstraction that became prominent in the late 1960s and the 1970s.  Wow, hardest Wiki cut and paste job I've had in a while.

Anyway, enough about that.  The real depressing part of the morning was the weather.  It had been 1,000 degrees (Disclaimer:  Rough estimate) in the week preceding the game.  So, I was definitely looking forward to another classic "brutally hot" Cal gameday.  Instead, early Saturday morning, a giant thunderstorm rocked the Bay Area.  It rained off and on all morning, as late as about 12:30.  It was coming down hard.  Praise Be To Bak Bak I was under an overhang during the tailgate.

Of course, the upside of all that rain is that the campus is truly lovely when lush: 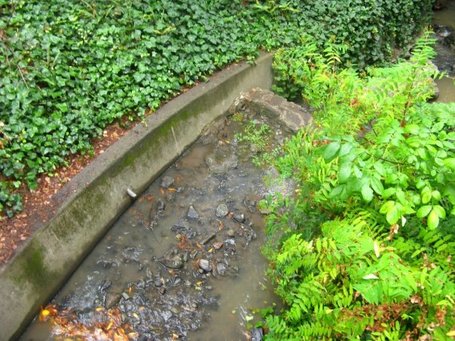 And, oddly, another side effect of the rain was that every acapella group was out on the campus.  I saw no less than 2 different groups on the 5 minute walk to the stadium.  No more than 2 different groups, too.  Try to guess how many groups.  Or, maybe I'm wrong, they weren't campus acapella groups and I am attending the wrong kind of tailgates.  But how do I get invited to a tailgate of delightful singing (that doesn't include the Cal drinking song)??? 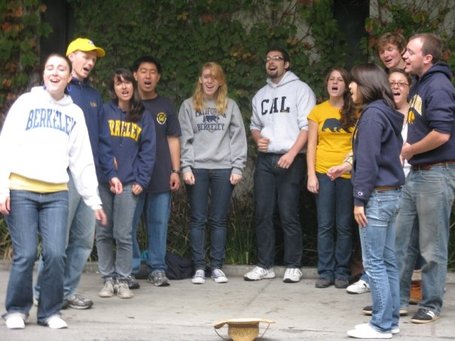 When I got to the stadium, the Cal team was just finishing up warm ups: 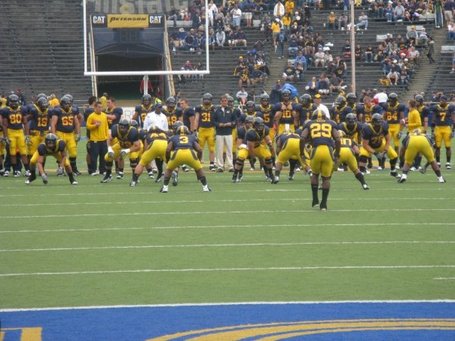 And Spencer Ladner limped out on crutches: 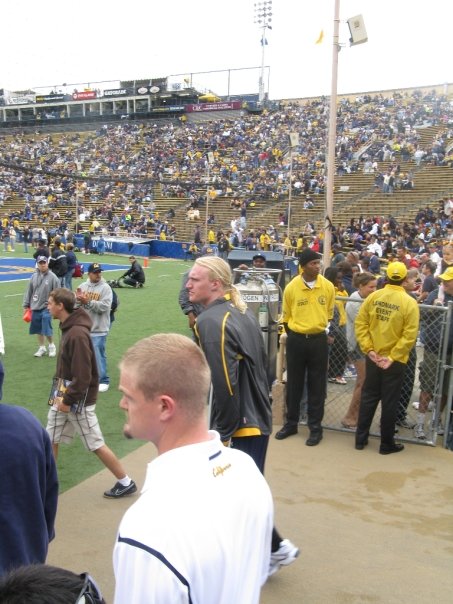 Look at how tall he is: 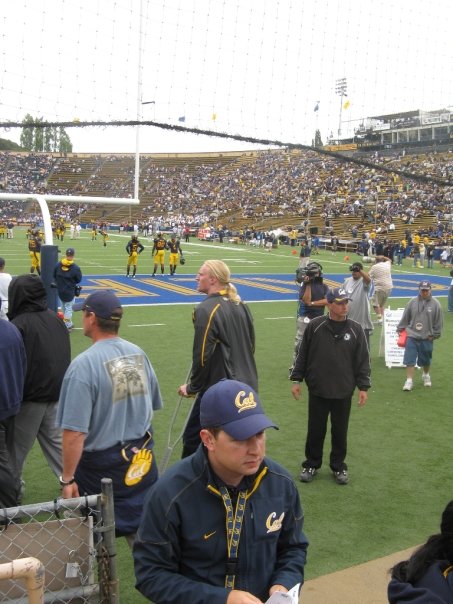 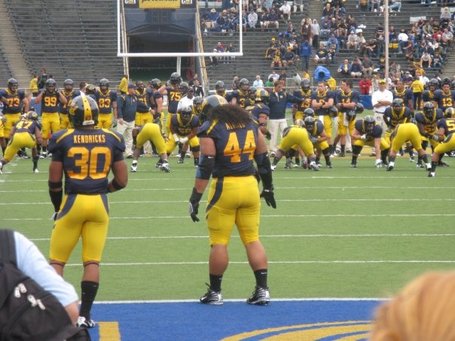 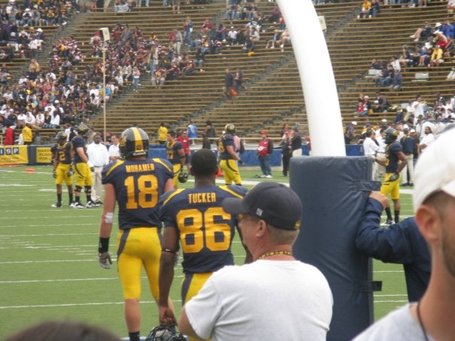 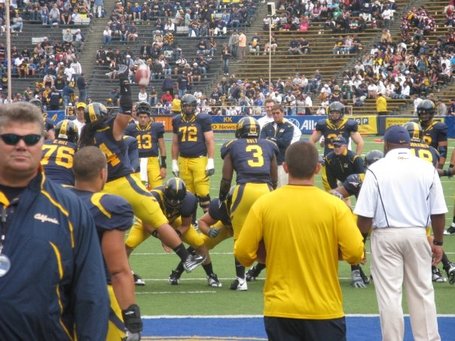 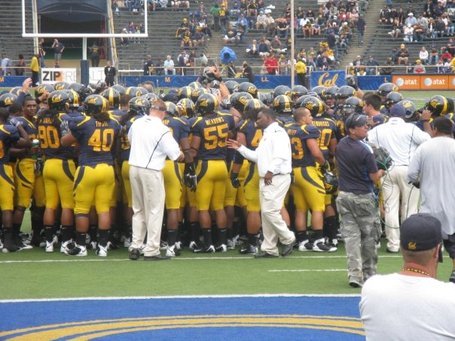 And then it was the time for the DRAMATIC RUNNING OFF OF THE FIELD!  CUE THE SMOKE! 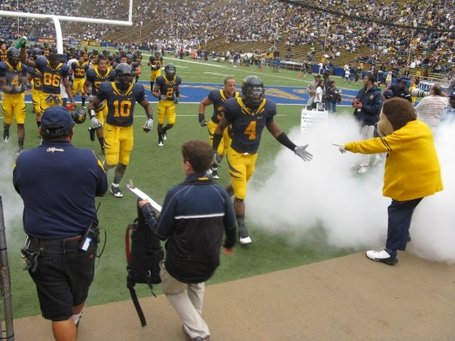 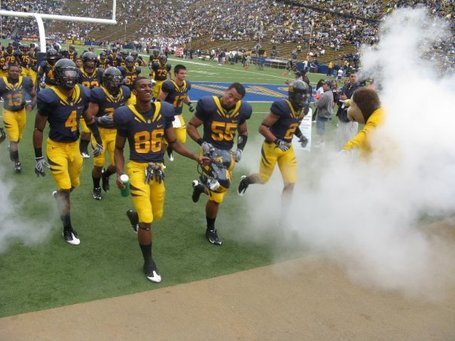 The OTHER 13 is Jarred Price, a sack specialist.  He has 2 sacks in 2 games and has the most energetic sack celebrations.  I look forward to seeing him celebrate more sacks in the future.  He is diminutive in comparison to some of the other players, but has a lot of power and speed. 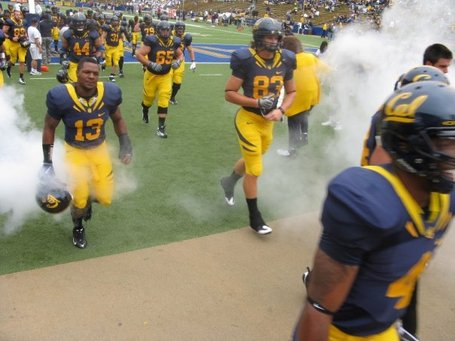 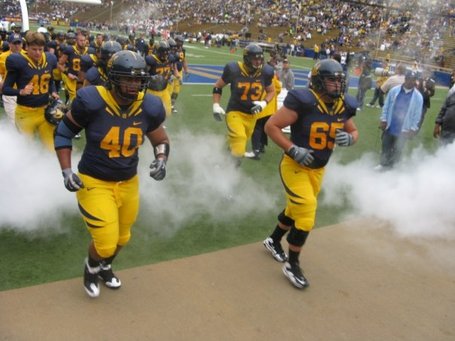 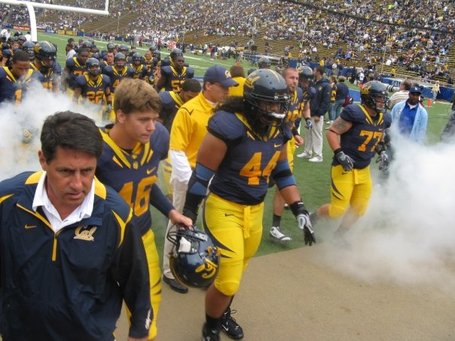 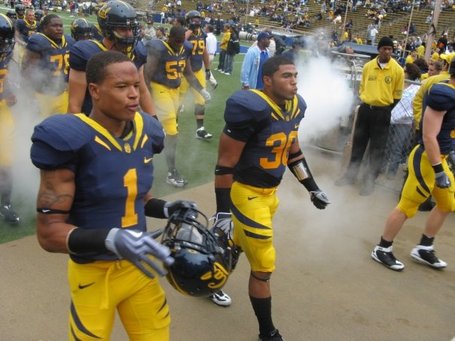 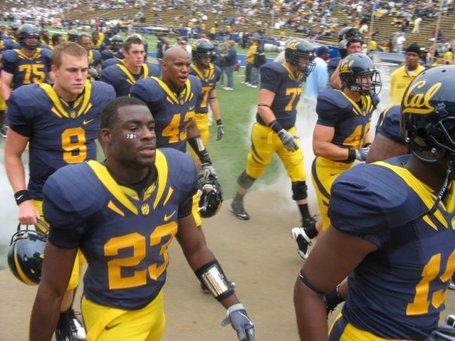 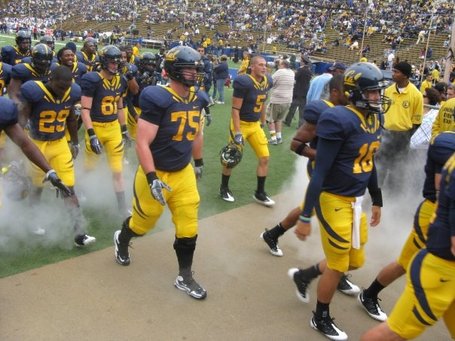 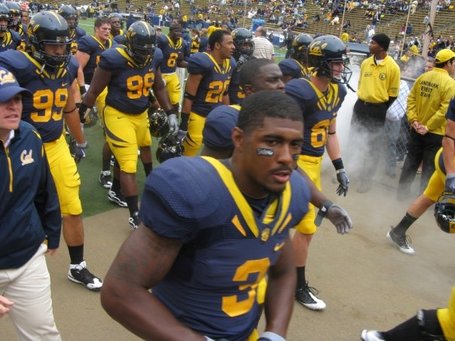 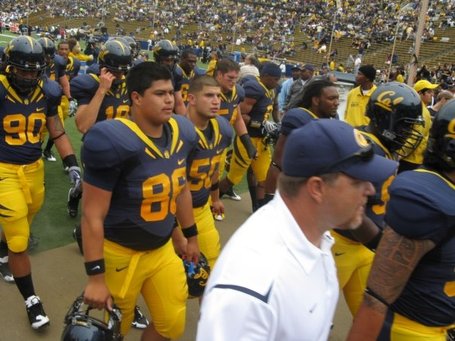 Ruh roh, I think Vereen has a receding hair line. 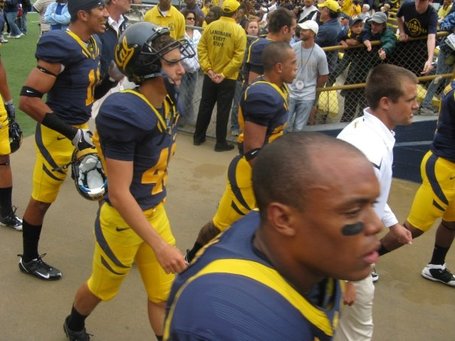 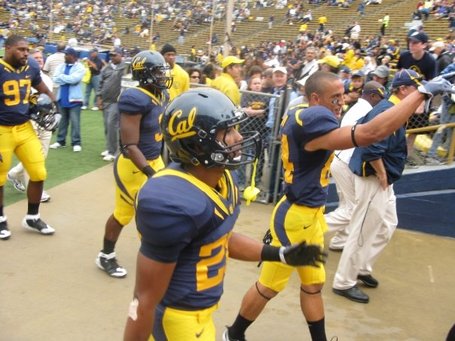 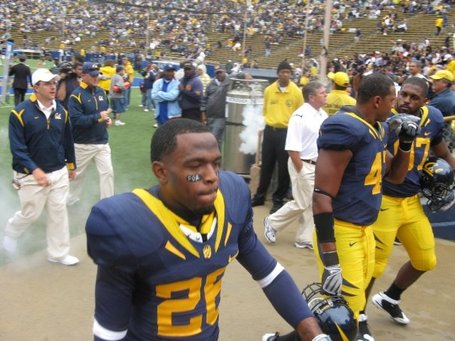 As the team finishes entering the North Tunnel, the drumline of the band starts playing a strong beat and the band and the team starts dancing around.  Like the swine flu, its infectious! 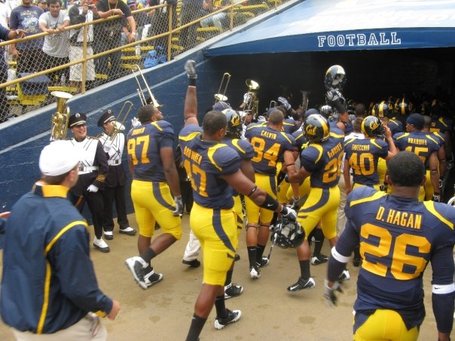 I did not see Tosh Lupoi (in the white shirt) dance at all, tho.  C'mon Tosh!  Show us some moves! 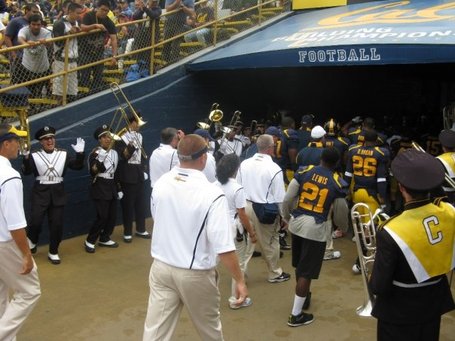 Then, came out the band. Never forget this:

Gotta give it to the drum major David "David Nagle" Nagle.  He might not grasp fully the concept of shaving ones face, but he does have remarkable flexibility.  I credit Bikram Yoga. 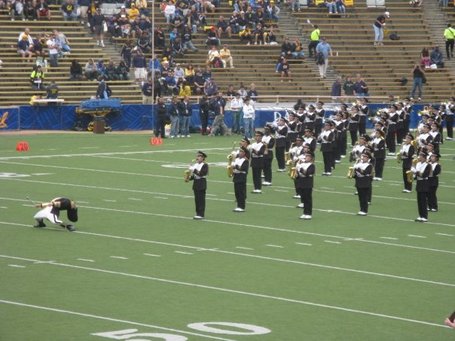 Ow!  He caught the baton again, but again with the throwing it 10 feet to his side.  I never get a good shot, because Im moving my camera at the last second to capture it.  I suck.  Fortunately, he doesn't!  Hopefully, he'll catch it again for USC.

But here was a section of the Blue Zone right before kick off: 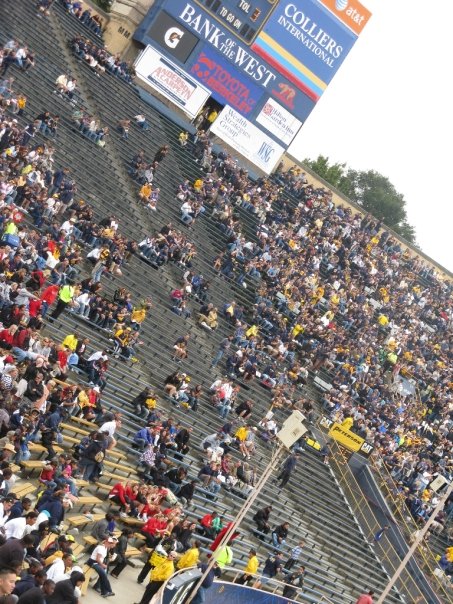 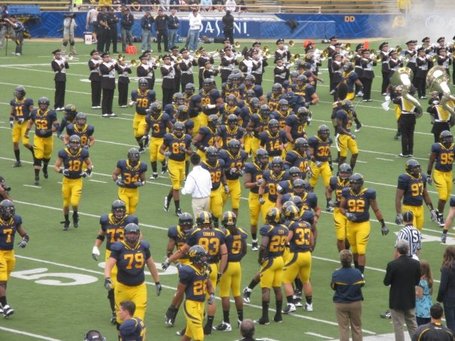 And the Oskimobile was back in action! 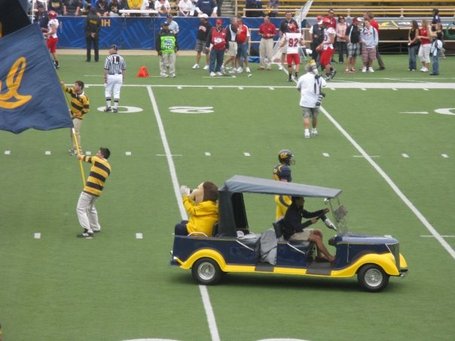 So, that's all the pre-game action.  We still have first half and second half action coming up.  Including photos from Monica's Dad, TheNick, Ragnarok of all the action, both on and off the field (including in the stands!).  GO BEARS!