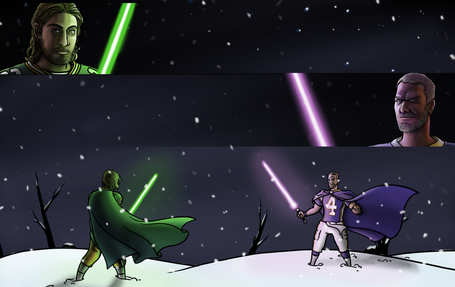 Cal football is not the only team eyeing a special season. The Green Bay Packers, led by Jeff Tedford's greatest success, Aaron Rodgers, is getting plenty of noise too. Mike Wilbon of PTI has mentioned him as his MVP candidate. Bill Simmons believes the Packers are not only going to the Super Bowl, but winning it all. Two of the biggest voices for the Worldwide Leader saying that you're team is that good can only mean the perceptions Rodgers will be judged by will be very high.

Football Outsiders, who was very low on Green Bay (not expecting them to make the playoffs, especially with the addition of Cutler to the Bears), now seems to have plenty of minds on their staff who think the Pack will exceed their projections, thanks to Rodgers and the offense. Save to say our golden boy has a lot riding on how well he plays tonight against Green Bay's arch-rival.

Follow the game action here and/or at the Green Bay SBN site, Acme Packing Company. Should hopefully be a fun way to wrap up a long weekend of football!