Share All sharing options for: Reveling in Victory - Cal

The second in (hopefully) a thirteen part series, this is a quick recap of a glorious Cal victory.  Commence reveling!

Not too much to say about this one - Cal was supposed to win big against an over-matched opponent and did exactly that.  If a 52 point victory can be considered subdued, this game was.  Cal again showed a dominance akin to the 2004 squad, but unlike last week's game, big plays were few and far between.  No deep passes, no deluge of sacks, and the only truly long run was (rightly) called back to the 40, where Best had stepped out of bounds.  The most exciting play of the game (aside from scoring an apple juice box for Spazzy McGee) was a 15-20 yard punt return by Ross, on which Will Kapp (I think) absolutely leveled an EWU player and Ross showed off his trademark hops to gain a few extra yards.  Maybe the weather, overcast, dark, and cool contributed to the laid back atmosphere, and perhaps this is the sort of game we should expect when facing a very well coached but obviously athletically over-matched team - a slow, consistent, inevitable bludgeoning.  The margin of victory was 13 points greater than last week's game, but few would say it was as interesting or exciting.  We must, then, revel in the fact that a 50 point victory does not incite much reveling.  A ho-hum victory at home over an FCS team - we might as well be in the SEC.

In the first five minutes, it looked like this could be a really dominating performance.  The defense came thisclose to picking up a safety on first and second downs, and the offense wasted no time in putting 7 points up on the board.  Then a funny thing happened - Syd got beat.  He must have bit hard on a double move, because the EWU receiver was wide open down the sideline and came up with a 25+ yard completion.  The only time I can remember Syd getting beat over the last year and a half was against Darius Heyward-Bey in Maryland last year - Syd missed a perfectly thrown ball by six inches and a first round draft pick capitalized for a touchdown.  This was a FCS receiver open by 5 yards.  The Eagles scored a few plays later and the game remained tied until the second quarter.

Cal never seemed to truly regain their dominant showing from the first 3 minutes.  The offense did put up 59 points, but EWU took away the 40 yard plays Cal found last week and settled for methodical, run heavy drives against a physically inferior opponent.  Cal's down-field passing gave way to short play action and screens - Cal's leading receivers were the fullback and the tight end, and I counted only two passes completed to wide receivers, one to Marvin Jones and one to Boateng.  The defense held EWU to only the first touchdown, but the Eagles successfully moved the ball at times using short passes over the middle of the field.

So how was Cal able to come out with a 50 point victory, when they couldn't throw down the field and had difficulty leaving the field on third downs?  Like most games, it came down to running the ball.  Eastern Washington couldn't do it, and one minor weakness from last week's game (run defense) looked much improved for our bears.  We'll find out over the next two games if that was due to the opponent or if Cal really has the run defense to stop SC.  On offense, Cal was able to move the ball easily on the ground and could have come away with a comfortable victory without throwing a pass.

The lack of drama did not preclude positive developments from our team.  Giorgio Tavecchio put his first two kicks inside the five yard line, although others that followed were not as strong.  The run defense was improved, especially up front.  Shane Vereen continues to excel with a slippery, low to the ground running style, and Covaughn Deboskie-Johnson looks great as the 3rd string back.  DebOSKIe runs upright, but has very quick feet which allow him to shuffle and change directions quickly.  Isi Sofele is VERY shifty which, coupled with his very small stature, makes him seemingly impossible to tackle.  Anthony Miller looks smooth and sure-handed at tight end, as Riley and the other QBs looked frequently for the big target over the middle.  Beau Sweeney seemed very comfortable running the offense and leading them to a last minute touchdown. 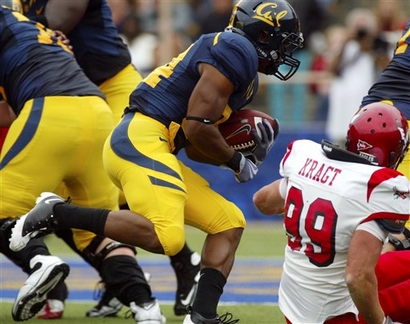 Vereen, starter for most teams

In a game of limited upside, however, the potential downside is of greater importance.  After Riley's extremely ill-advised shovel pass and Best's miraculous something out of nothing run, Jahvid limped off the field and did not return (not that he needed to - I think we were up by 35 at that point).  He was limping on the sideline with a taped left ankle, though he was walking around and smiling to congratulate his teammates.  Judging by his demeanor, he was not in very much pain, but he hasn't proven himself to be the most durable player and it was disappointing to seem him get dinged up on a meaningless, broken play late in a long since decided game.  This goes without saying, but man, I hope he is ok.

Two games, two blowout wins.  Tonight may only include predictable, subdued reveling, but 111-20 over only two games is cause for at least some celebration.  GO BEARS!