Roll On: Watch the Cal Offensive Line Versus EWU

Share All sharing options for: Roll On: Watch the Cal Offensive Line Versus EWU

I thought about using the same moniker as last week, but the question of "How Cal Should Beat Eastern Washington" is a lot easier to answer: DON'T TURNOVER THE BALL. And then the article would've been over.

I figured you wouldn't be really interested in that sort of yeoman analysis. So let's focus on what you should be watching.

Against an opponent like Eastern Washington (let's admit they're decent for an FCS school), don't expect amazing playcalling that'll blow your doors off. Expect a standard Tedford playbook of establishing the run, passing the ball at the opportune time, then settling into a second half groove of running clock with the second-stringers. And if you thought Cal's defense played it safe against Maryland, expect them to be super safe against Eastern Washington, at least until the Bears are up double digits.

We saw some of what Cal's O-linemen would do in the season opener, but it probably was secondary to most of you to what the skill players were doing. It's totally understandable. In sports, we follow the ball. However what happens off the ball in football is about 80 percent of the game, so we'd recommend taking this week to look at what Cal's less-heralded players do to perform.

So this week, get to know your O-linemen and the run blocking strategies they execute. They are the key to Jahvid Best, Kevin Riley, and the success of the 2009 Cal offense. Without them, Cal won't be able to run, and concurrently will have a tough time passing. It's been the key to every Tedford offense since he's gotten here, so it's definitely worth your time to watch how they open up holes for everyone else.

I spoke with The Bear Will Not Quit on the subject before the season, and his thoughts on what we'll see from the O-line in establishing the run are after the jump.

With a more experienced unit in place this season, what type of run block schemes do you think Cal will run this year with new offensive coordinators and offensive line coaches?

TBWNQ: You know how I said you could do a whole post, heck a whole book, on QB mechanics? Well, you could teach a semester on blocking schemes. To me, this is really the the most cerebral part of football, along with picking apart zone defenses in the passing game.

The other thing going on here is that things could really unfold in any number of ways. Ludwig's roots are more in the traditional Tedford mold, but his last two jobs have been in spread concept offenses. But he also did incorporate some of his prior background into his spread offenses at both schools. At Cal, there have been sort of four approaches or models: the Cortez years, the Dunbar year, the Tedford year, and the Cignetti year. Among all those offenses, Ludwig and Tedford (and Marshall) could dream up a lot of combinations from the things that worked well.

There are two other factors: Marshall, and the available personnel. Marshall will definitely have some thoughts that I think both Ludwig and Tedford will be interested in incorporating. And you can't block a play in a way that doesn't work for your personnel. For example, if Cameron Morrah is your TE and Terrell Suggs is the DE, you don't call a play where TE takes on DE one-on-one at the point of attack (unless your offensive coordinator is Doug Cosbie). You have to block it a different way if you still want to attack that gap.

Considering all those things, I think we are going to see a little bit of everything (how's that for committal?), in particular early on until the coaches see what works against different defenses. That's actually a fourth variable - the opponent. In other words, expect variety. 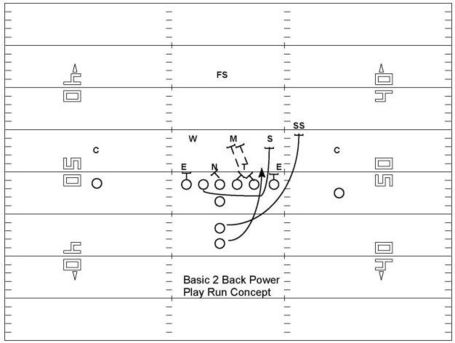 In terms of specific examples, I think we'll see the old "power" schemes with a pulling guard and fullback. I think we'll see other gap or zone blocking to get numbers and allow Best to pick a seam in space and go, especially on the edge where Best excels. I think we'll see weakside counters, counter treys and trap blocks to take advantage of what I am almost certain will be aggressive front 7s trying to disrupt our blocking and shut down Best.

But the thing I really hope we see, and I have a feeling Marshall may incorporate, is a more sophisticated level of deception. One example would be pulling guards the opposite way of the run. This is a scheme some NFL teams use, though it requires a lot of practice and skill players that can block well. But if done properly, it can be devastating to a defense.

Why? Because LBs, particularly ILBs, are taught to read the guards as their keys , especially in the college game. They are taught often to follow pulling guards because they will take you to the ball. And in many pulling situations, that's exactly what happens. But if the guard goes the wrong way and the LB follows, he's just taken a LB out of the play. When done well, it's a thing of beauty to behold. 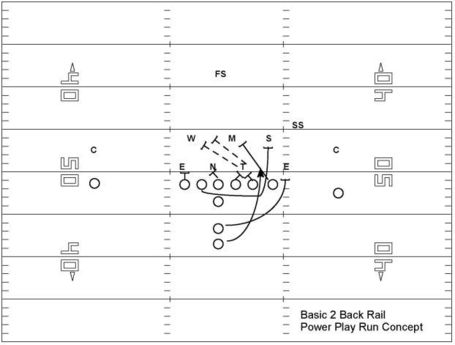 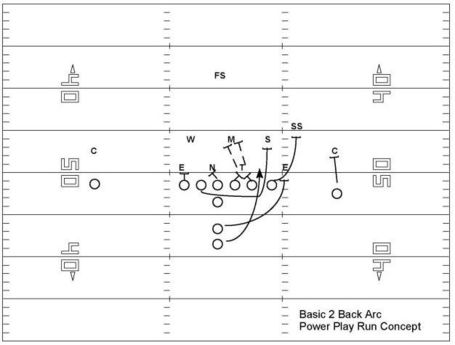 Will they be similar to the power run rail and arc schemes we ran with great success earlier in the decade (note: videos of the old Cal rush offense at the bottom of this link? Or do you think we'll see something new?

With respect to "power run rail and arc schemes," a clarification is in order. "Power" in the Tedford parlance refers to a concept or package of blocking schemes predicated on creating downhill angles of advantage, typically with pulling lineman and a kickout-lead combo at the point of attack, i.e. one guy kicks out, one guy leads up through the gap. "Rail and arc" in the Tedford parlance refers to blocking options within the "power" scheme that are designed to deal with matchup problems or alignment problems, for example an outmanned TE at the point of attack or a wide DE. It is therefore technically possible to see a "power" concept without a "rail" or "arc" block.

In terms of whether we'll see these concepts and blocks, I think we will. I think it's a safe bet that power will be a staple of the Tedford offense forever, albeit in varying amounts. It's a Tedford trademark.

And for good reason. It's an extremely effective, sound model if your players can execute it. It doesn't require one guy to physically dominate his opponent straight up. It allows guys to blow up the defenders and plow the field in a dominating, downhill fashion, through the use of angles, without having to out-muscle them. And the Tedford model of the power concept in particular is predicated on simple techniques that can be applied to several different formations. This allows great interchangeability without overwhelming the players with dozens of different blocking schemes.

In fact, they ran it a bit last year with some success early on (except MD, who absolutely blew it up, exposing the unit's lack of experience). But as the season wore on, they seemed to go away from it in favor of Cignetti's run scheme (which they had some nice success with later in the season).

Part of the reason I think we saw it less last year was because it requires three things this team really didn't have last season: (1) quick, agile guards who can make reads and adjust blocks on the run, (2) TEs who can handle DEs one on one, and (3) tackles who can read and peel off quickly. Other than Guarnero and Schwartz, the rest of the group really didn't fit the bill (Malele was a bit dinged up).

The main question with this year's group is the guards. Tepper and Schwartz can handle it. Cheadle and MSG are touted as being pretty athletic, so we'll see.

The other critical component to power schemes is a dominant blocking fullback, something Cal has had the past two years. Whereas there are upgrades on the line, it'll be interesting to see how this year's fullbacks handle the job. That might affect how the team blocks power concepts, and how often they use the concept.

In sum, as I said, with Ludwig's and Marshall's backgrounds, I could see them developing a nice mix of power, zone, trap and perhaps some 'deception' schemes. Maybe I'm being too optimistic - this is college football, not the NFL. And it depends on the players' ability to absorb it all. But I will say this: I am more excited about what we're going to see offensively than I have been in a while. I strongly suggest watching the o-line this season to get a flavor for what these new coaches are all about.

Click on the image above for examples of zone running schemes

Some other notes on the O-line from Cal.

So focus on how the Bears run the ball. If everything goes according to plan, they're going to be doing plenty of that Saturday, and it'll be critical to understanding how well Cal performs in successive Saturdays.