After an afternoon of people cheering Longshore being potentially injured, nothing really capped that off as well as watching Stanford fans storm the field while the announcer yelled "THE AXE IS COMING HOME."

And you know what they say about payback. It takes roughly 2 years!

Avinash: Your writing after that loss was definitely great stuff:

While I have no idea how to emotionally deal with success, I am more than well equiped to deal with failure. It excites me. And when I say "excite" I really mean "arouse." It turns me on. I really get off on failure. This whole year while everybody else was "Saying oh no, not another Longshore interception just as it looked like we might tie the game up late in the 4th" I was touching myself inappropriately and yelling "Oh yeah, Nate, underthrow that shit, oh yeah, fucking underthrow the shit out of that, oh yeah, yeah, yeah, yeah, yeah, yeah."

Tedford, when Robert Jordan nearly decapitated that camera-man yesterday I think I splooged all over section 228 row I. And those are some pretty long rows.

Tom Shneider pulling his hammy before the opener was a god-send. Anytime I saw Kay sprint out there for a FG over 35 yards, it was just all "Schwing!"

My wife even knows. When she wants to steamy up our love-making, she knows all she has to do is just whisper "1st and Goal at the 1" into my ear. And I am good to go.

Cal’s stunning inability to not score helps me score!

It seems the more we lose, the better your writing gets.

No offense, but I hope your writing sucks this year.

HydroTech: That was some epic writing there, Twist. 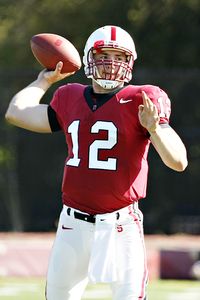 Ted Miller has this to say:

But a bigger issue was the terrible passing offense that couldn't complement a strong, physical running game led by 237-pound tailback Toby Gerhart.

Stanford only averaged 152 yards passing in 2008 and tossed 15 interceptions versus just 11 touchdown passes.

Into that glaring weakness stepped Luck.

Terms and phrases Harbaugh used to describe his quarterback during a 10-minute chat: poised, loose but focused, humble, confident, smart, adept at reading defenses and a guy who learns from mistakes.

"He's got a lot of things going for him -- a lot of physical talent," Harbaugh said. "My wife says he throws lasers. And they are right on target."

The physical skill is obvious, but so are the smarts. Luck was his class valedictorian and plans to major in architectural design. He could have played for a lot of big-time programs, but he was eyeballing Stanford even before the school was on to him.

Avinash: I'll just go out and say it: Other than Autzen, the Furd will be our toughest road opponent this year.

This isn't a bad team. They're returning 17 starters. They have a very favorable schedule to start the season. So they could be playing for either bowl eligibility or bowl positioning in this one. I expect a very tense and tight Big Game, especially if Cal is playing for something big.

TwistNHook: I predict that Stanford will have an improved offense. Gerhardt will only get better and if Luck improves he could be a step up over Pritchard.

The Cardinal runs a 4-3 defense, and losing the two starters on the defensive line will not help a unit that gave up more yards per play than every Pac-10 team except Washington and Washington State. Ron Lynn and Andy Buh are co-defensive coordinators, but Lynn is the one calling the defenses. He is respected for his many years in the NFL, and he did a pretty good job of maximizing his talent last season, his first with Stanford.

How quickly several former offensive players adjust to playing defense will determine the defense's success. CB Richard Sherman, a former starting WR, and SS Delano Howell, a tailback last season, could be starters, and few others could get playing time. The position moves also indicate the Cardinal is looking to upgrade its talent on that side of the ball.

LB Clinton Snyder and FS Bo McNally give the Cardinal a pair of hard-hitters, the kind of physical players Harbaugh loves. But Clinton has had a lot of injuries (although he's played through most of them) and McNally is not great against the pass.

The Cardinal defense is not going to dominate anyone; it just needs to make enough big plays and avoid major mistakes. That is well within its capabilities.

Although it lost its best defensive lineman (DE Pannel Egboh), Stanford does have the ability to rush the passer with DE Tom Keiser and DE Erik Lorig. If Clinton can stay relatively healthy, the defense should be better than last season, although it still won't be among the Pac-10's best.

Yellow Fever: I think we're overlooking what is clearly the biggest strength of the Cardinal. The tight ends.

HydroTech: I saw this on Fox Sports:

I'm a believer in a solid rushing attack and RB Toby Gerhart (pictured) is a beast to bring down. Coach Jim Harbaugh has had two consecutive brilliant recruiting classes and is quietly waking up the West -- they are murmuring national championship talk up in Palo Alto. Their schedule has enough teeth (No. 22 per Phil Steele) for NC consideration if they win the Pac-10: They host Oregon, Cal and Notre Dame and travel to Wake Forest, Oregon State and USC. 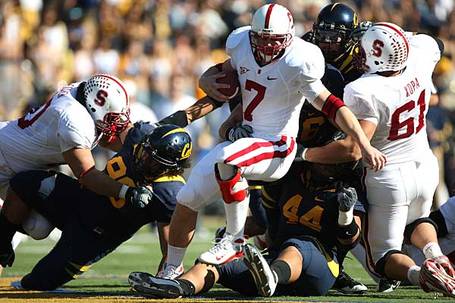 I doubt that Luck will perform that well this year as a freshman. And as for Toby Gerhart, he's a decent back, but I'm not sure there is enough offensive power overall to sustain a Pac-10 Championship season. I see Stanfurd winning about 5 games this year... and maybe 6, but they're not even going to get close to a Pac-10 championship.

Ragnarok: I think you need to become bowl-eligible before you can start to "murmur national championship talk".

Yeah, looking at their schedule, I'd say that Stanfoud looks like they'll most likely finish with 5-7 wins. WSU, UW, and SJSU look like wins, and UCLA and the Arizona schools should be games that Stanford can win as well. But once again, it's a backloaded schedule for them -- their November is as follows: Oregon, @USC, Cal, Notre Dame. They'd better get to 6 wins by the end of October if they want to play into December.

Personally, I'm actually excited that the Big Game has the potential to be a good game again. The last time both Cal and Stanfurd both went bowling in the same season? 1996. And 7-5 'Furd over 6-6 Cal was hardly a classic. 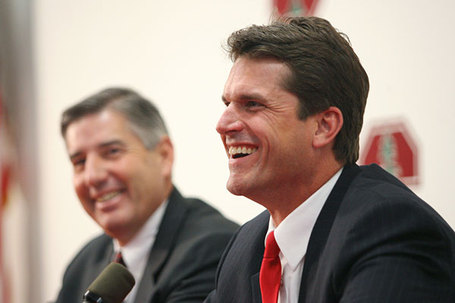 Yellow Fever: I think we'd all be looking forward to that with an enthusiasm unknown to mankind.

TwistNHook: Wasn't the 1996 Big Game that one that was the 100th Big Game? There was all this hoopla and then Stanford beat us like 10-3 or something. That sucked.

Avinash: The big question: If Tedford was to somehow win the Big Game and clinch something important like a bid to the...uh...LAS VEGAS BOWL...then should we get him a $75,000 private bathroom?

How you mix these games up is beyond me.

TwistNHook: I've embarrassed myself yet again.

HydroTech: Wow, that's a big much for a bathroom? Does it have gold plated toilet seats or something? Only gold touches Harbaugh's butt?

TwistNHook: Look, let's be clear on one thing here. Toby Gerhart is Stanford's #1 weapon. They have a suspect D. They are working in a young, albeit talented QB. Their one main source of stability here, by far, is Gerhart. If he can play at a high level, he could help provide cover for Luck to develop quickly. And keep the D off the field with long, sustained drives.


"I did not realize that Stanford received a 15 yard penalty on that last kickoff, because they celebrated their ostensible game-winning field goal. How did that penalty affect the outcome of the Play??"

Here are his impressive numbers from last year.

Will that happen? I don't know. Last year Gerhart was killing us in the 1st half of the Big Game. Here are his numbers from the Big Game:

If my math is accurate, Gerhart had 16 yards in the 3rd quarter and 25 and a TD in the 4th quarter. That was partially, because Cal got up quickly and they had to throw with Pritchard a lot. I believe Pritchard had a season high in attempts that day.

So, the key for Cal winning this might be taking Gerhart out of the game. Be it by containing him or exploding offensively so he is used less, it's unclear.

How do you guys see this one ending up? Do we keep the Axe?

Uhh...don't commit turnovers. Cal is a better team than the Furd. If we don't make mistakes, we will win.

TwistNHook: KeepTheAxe4life! I say we win 85-82. Stanford is an improved team and it'll be close!