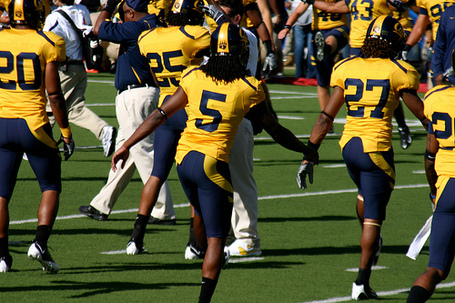 I think we're ahead of last year. Everybody seems to moving a little faster this year. We got a lot of healthy guys and defensively being into this 3-4 defense over a year, just allows us to come in and install more to the defense and be able to play faster. And the offense, they look pretty good adjusting to the new coordinator that came in, in the spring. Everything seems to be moving fast and real comfortable.
- [Syd'Quan] Thompson on the difference between this year and last year's defensive unit.

Syd'Quan Thompson has come a long way. When he was thrust into a starting role as a redshirt frosh, Cal fans went ballistic, proclaiming him useless, a failure, a saboteur, etc. They wanted him benched, banished, gone, and it took nearly a year for him to escape the shadow of that inauspicious debut.

Now? Check out his accolades after the jump.

How do you feel about the Cal secondary? At this moment, where does Syd'Quan Thompson rank among Cal's greatest defensive backs?

Preseason All-American. Watchlist for the Lott Trophy, where he will be going toe-to-toe with fellow Pac-10 D-backs like Taylor Mays, T.J. Ward, and Alterraun Verner. Finalist for the "Jim Thorpe Award (Best DB in Nation), Chuck Bednarik Award (Best Defensive Player in nation according to Maxwell Football Club), and Bronco Nagurski Trophy (Best Defensive Player according to Football Writers of America)". Unlike many who have wilted from the pressure and the hate, Syd has not only risen to the challenge but transcended it. He didn't whine or wilt, he emerged as one of the best Golden Bear defenders of the Tedford era.

Jahvid is going to get all the hype and pub this season, and he should. But let's not overlook how far Syd has progressed a player. One could say his journey of personal and athletic growth as a Cal football player parallels the odyssey of many a Cal student. True Golden Bear, through and through. 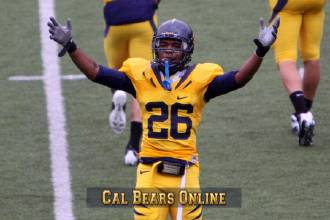 The Squid and the Barbarian: I'm not even sure what to say about these two. They combined for 36 passes defended, tied for first with Alterraun Verner and Michael Norris of UCLA for tops in the nation. They broke up 29 passes, second to Verner and Norris. I mean, you'd think there isn't much room for improvement, right?

Well, if we have to nitpick, Hagan and Thompson only combined for seven interceptions last season (only? Yeah, only). Although the Bears were third in the nation in interceptions with twenty-six (a leap up from 90th in 2007 with ten), and the secondary combined for seventeen of those, you'd figure that Darian and Syd would be able to rein in more of those broken up passes.

Pass break-ups are great (and Hagan and Syd had plenty of spectacular ones last season). Interceptions are better. So, uh...try to rein in the balll when you can guys.

(I feel so wishy-washy with this, because both of these guys turned in A+ performances most of last season and now I'm asking for A++. I hope I don't ever do this again.) 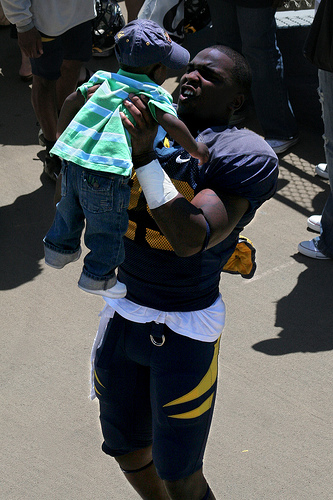 via farm4.static.flickr.com (Link to original image)

Why we need a healthy Ezeff: Ezeff has supposedly stepped into a leadership role this offseason, and that's great news, but even better would not be seeing his name next to an injury report. Because If there's any position the Bears are vulnerable in terms of depth, it's at strong safety. Bear Will Not Quit points out why:

Since 2007, all meaningful snaps at strong safety have gone to Hicks and Ezeff. No one else on the roster has had much of anything in the way of experience at the position. If Ezeff goes down, it's sophomore DJ Campbell, or one of the myriad corner/safety hybrids like Conte, Nnabuife or even Cattouse.

I think DJ Campbell can be a nice player eventually. He shows some nice athleticism in his high school highlight video (link here), and he got scout team player of the year honors. But as with defensive line, he's got very little experience. And he's a bit light to be playing the position at 5'11 198. Ezeff is 220. And Conte, Nnabuife and Cattouse are really free safeties or cover-2 corners who aren't exactly built to come up and play in the box. I have no doubt they could adapt to the position eventually, but that will involve a dropoff in production at least for a time.

Ezeff is not necessarily an all conference player, but he is a solid guy who knows the position very well, can play all 4 downs, and has a lot of starts. If he goes down, it will leave a bigger hole than people think.

Which is why I winced at this news from earlier in camp.

After pursuing Vereen on a 30-yard scamper, safety Marcus Ezeff pulled up lame and had to be carted off the field. Tedford said after practice that Ezeff had a sprained ankle.

Eek. He should be fine, but stay healthy Marcus.

Meet our secondary coach: Finally, Rivals profiles Al Simmons, who found his groove pretty quickly in creating one of the strongest defensive back corps in the country.

# One of the more noticeable catches of watching the secondary every practice is observing position coach Al Simmons in action. Every coach has their style of teaching. Some like to yell, some are very energetic and some are mellow.

# Simmons is just as demanding as any other coach out there, but his coaching methods definitely scale more towards the relaxed side.

# A Bay Area native, Simmons joined Tedford's staff last season and the results have been through the roof. If fans don't think coaches make that big of a difference, just look at what Simmons has done to help the defensive backs get better over the last year and a half. Absolutely night and day.

# Every practice during 7-on-7's and 11-on-11 sessions, Simmons stands way behind the last safety on the field, presumably to get an 180 degree look at the entire field. The second a play goes dead, the springy Simmons sprints back towards the line of scrimmage to talk to his players.

# Additionally, when a running back breaks off a big run and gets into the second level, Simmons sprints alongside the defensive back that is chasing the ball-carrier and you can hear him constantly say to his player, "finish, finish, finish" as to make sure his players don't give up on the play. Truly one of the more impressive position coaches in the business.