Last Thursday I had the good fortune of being able to attend Pac-10 media day.  Armed with a camera, a laptop, a phone, and some questions, I went to the promised land in search of knowledge from the Great Tedford.   After the jump is the story from the first half of the day.  I briefly talked to Tedford, met Ted Miller, and tried to make sense of what Jim Harbaugh was talking about with all his silly metaphors.  I included highlights from some of the press conferences, but focused more on the aspects Cal fans and the CGB community at large (as best as I understand you people) would appreciate, enjoy, and find entertaining.

By the glory of Tedford, I made it 50 miles up LA's 405 (which some of you may know as the 2nd slowest freeway in the world) to the Sheraton LAX Hotel in only about an hour.  I arrived at about 8:45, well before the coaches, players, and most of the media.

Oddly enough, all I had to do to get in was write my name, my affiliation, and email address on a sheet of paper and then walk in.  No one verified that I was who I said I was or even cross-checked the sign-in sheet with a list of approved attendees.  I didn't recognize anyone who was in the lobby, so I wandered into the press room and took a seat.

While spending an eternity trying to connect to the Sheraton's miserably slow wireless network, I noticed that I was sitting across the aisle from Ted Miller, our favorite ESPN blogger.  The next time I looked up, he was gone, though.  He had a habit of disappearing periodically, which made it difficult for me to find him to ask some questions.  While I was still trying to connect to their network, I noticed Rick Neuheisal in the doorway of the conference room.  I thought about talking to him, but I probably would have said something offensive like "Can I be UCLA's leading receiver?" or "Did you bring home that military vest so you can safely stand on the sideline when Kevin Craft is throwing?" 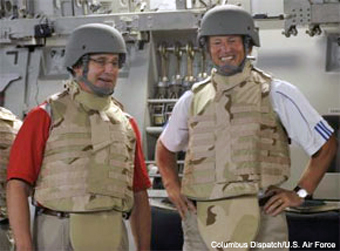 I went to get a glass of water (they had these fancy goblets for our water) and saw that the Almighty One, Tedford, had arrived.  I set down my water at my table and shuffled over to where Tedford was talking to some individuals.  Side note: Tedford had a young (early teens) guy with him whom I did not recognize.  Does anyone know if Tedford has a 13-14 year old son?  Anyway, after he finished talking with a pair gents, I introduced myself to him and asked if the reports about the names on the uniforms were true.  He said yes and added "I'll bet you're glad you'll be able to tell who's who!" and then excused himself, as he had to go line up for the coaches' photo. 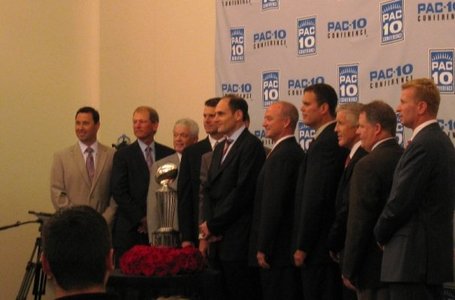 Hopefully this is the second-closest Tedford will be to the Rose Bowl trophy this season. 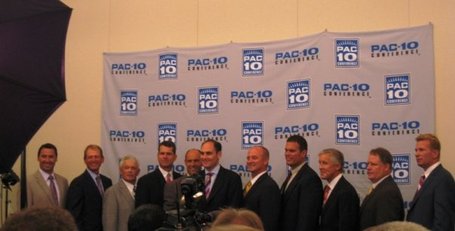 Now that all the coaches had arrived, it was almost time for the press conferences to begin.  To start the day, Pac-10 commissioner Larry Scott came to the stage and introduced a highlight video from the 2008 season.  Cal, USC, Oregon, and Oregon St dominated the video.  Scott then had a few videos which highlighted specific players.  Jahvid Best, Taylor Mays, and Jacquizz Rodgers were the only players to have personal highlight reels.  After this, Scott stepped aside and let the coaches begin their press conferences.

First up was Wazzu and Wulff (who, in person, looks far too similar to Stanford's Harbaugh), whose press conference was forgettable for most Cal fans.  I found it interesting that he said he would incorporate some elements of the spread into the Wazzu offense this year.  He also assured us that, exempting serious injuries, the Cougars will have a much better defense this year.  Giving up 60+ to USC, Cal, and Oregon, the Cougars would have difficulty NOT improving on defense.

Next up was Steve Sarkisian who represented the Huskies. It seems Jake Locker has improved tremendously throughout spring practice.  I was surprised to hear this because Locker seemed much more suited for a Chip Kelly offense than a Sarkisian offense. Though highly successful at USC, Sark said he can't replicate everything he did at SC when he's up at Washington.  Basically, they're not going to be "USC in purple."  He said he has to take advantage of the skills his new players have instead of the skills with which he is accustomed to working.

Next up was UCLA coach Rick Neuheisal.  Following the series of decommitments they had last spring, I found it particularly entertaining when Neuheisal said "early recruits are trouble."  UCLA's press conference was one of the few where the player sitting next to the coach spoke quite a bit.  Reggie Carter told us how Kevin Prince was calm and composed during spring practice.  He said they would be yelling at him and everything and Prince was unaffected. It's too bad the Pain Train isn't around to put this theory to the test this year.  I bet Follett could break Prince's composure.  YOUR COMPOSURE IS MERELY AN APPETIZER FOR THE PAIN TRAIN, WHOSE THREE-COURSE MEAL CONSISTS OF YOUR O-LINE, YOU, AND ANY SHRED OF DIGNITY LEFT IN YOUR CRUMPLED BODY!

Carter continued talking about how he was looking forward to going to Tennessee this year, especially since he's been hearing a lot about a certain "Rocky Top" song.  He said he looks forward to hearing this song.  Immediately I wanted to stand up and yell "IT'S A TRAP!" but I managed to hold myself together and remain quiet.  Carter will hear "Rocky Top" this fall.  He will hear it until he vows never to travel back to Knoxville again.  He will have nightmares consisting exclusively of the color orange with that song in the background.  May Bak Bak have mercy on his poor soul. 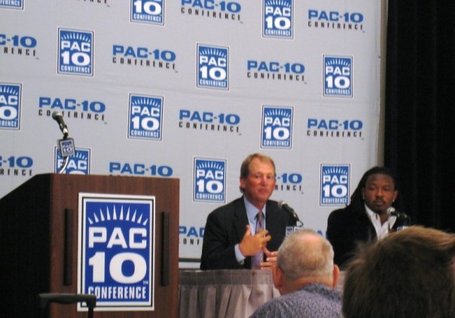 Stanford's Jim Harbaugh was up next.  If any of you have never heard Harby speak in person, you need to do it sometime.  He uses cheesy metaphors that seem highly inappropriate to the subject matter (not unlike Stanford's "blue collar" attitude toward football; Stanford and "blue collar" don't belong in the same sentence, nor even the same paragraph.  In fact, I'm not even sure if they're from the same language).  Anyway, Harby was going on about how Stanford football's foundations are built on bedrock instead of "shifting sands."  He spent at least a minute talking about this metaphor.  It was like being beaten over the head with a Norah Roberts novel.

Next Harbaugh talked about the time he was walking past the Stanford baseball field and he saw Toby Gerhart playing center field.  Harby spoke to Toby through a hole in the fence for about an inning and a half. Harby spoke of Toby with an enthusiasm unknown to mankind.

To continue his bizarre stories and metaphors, Harby talked about how Stanford football is a "relentless hunter" who each week wants to "kill" his prey.  The next week, he'll find something else to "kill."  This was just bizarre.  Stanford is not a hunter.  It's the vulture picking at the scraps that USC, Cal, Oregon, and Oregon St leave behind. 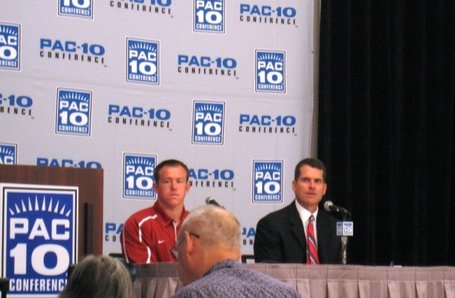 A couple of blue-collar, relentless killers built upon a foundation of bedrock and expressing enthusiasm unknown to mankind.

Next up was Dennis Erickson of ASU.  He emphasized improved defense and gains in experience.  Beyond that, he had a quick wit and consistently made the audience laugh.

Finally, we were given a fifteen minute break and I planned to use it as my opportunity to talk to Ted Miller.  But by the time I filled up my goblet of water, he was gone again, naturally. 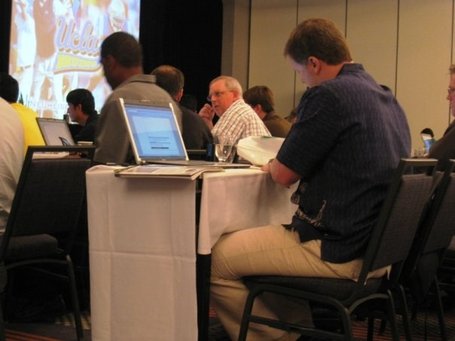 He was soon back at his seat and I seized my opportunity to talk to him.  I introduced myself with him and when I told him I was with CGB, a big smile came over his face.  I asked him if he actually read us or if he has some minions send him links from our site.  He not only said he reads CGB daily, but he showed me the bookmark to CGB on his PC! He praised HydroTech's play breakdowns and told me how unique Cal fans are.  He said we send him letters that have the most intelligent and well reasoned arguments. Our letters are practically dissertations.  He also told me he has talked to Tedford about the Cal fans who send letters asking if Tedford is right for Cal--if he is the one to take us to the "next level."  Both he and Tedford had a laugh over how absurd those fans are.  He wondered if those fans remember the days when Memorial Stadium brought in 25,000 fans on Saturdays.

I asked Miller if he knew which games he'd make it to this year, but he said he doesn't find out which games he's attending until the Sunday before.  This makes travel a bit of a hassle, but he does get to see a game every weekend. I hope we can see him at a few Cal games this year.

This ends the first part of this two-part piece.  Tune in tomorrow for the conclusion of my day.  It features the Cal press conference (as well as the Arizona, OSU, Oregon, and USC press conferences), a roundtable lunch with Tedford and Best, and a comically awkward discussion with some Cal media reps about CGB!