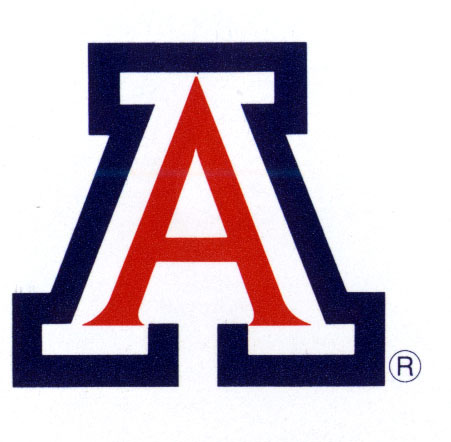 Which loss will sting worse?

HydroTech: I think their loss of Willie T. hurts more. In our offense, with the FB taking on a smaller roll, the loss of Willie T. isn't too bad. However, for Arizona, their Willie T. started for pretty much four straight years. That's four years without any QB understudies getting quality reps in games. In other words, their QB this year will be pretty inexperienced. Who is their new QB this year? Matt Scott?

Yellow Fever: It just occurred to me that I know absolutely zero players on both Arizona and Arizona State

TwistNHook: But how any fantasy players do you know on Arizona and Arizona State?

Random, but unfortunate news. Mike Stoops is getting divorced:

University of Arizona football coach Mike Stoops is getting divorced, he announced at his first news conference of the season this morning.
Stoops, 47, was visibly emotional when he made the announcement at the end of the news conference. Stoops and wife Nicole have two children: Payton and Colton.
"Sadly, I must make the announcement today that my wife Nicole and I have separated and will be taking the difficult step of a divorce," he said. "This is a very hard time for us. But more so for our two young children as this is a very personal matter.

Avinash: Lute Olson, now Mike Stoops. Are there an abundance of cougars in Tucson or what?

TwistNHook: You are really obsessed with women from Arizona, aren't you?

Ragnarok: Well, it sucks for him and his family, but I really feel like this is none of our business. 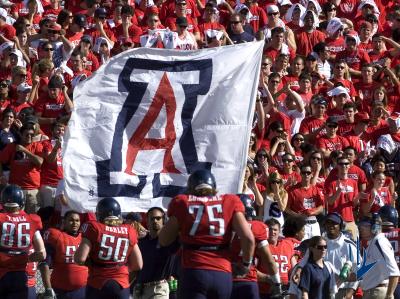 TwistNHook: Rob Gronkowski killed us last year. He is a massive beast of a tight end. Look at his numbers:

Do you cover him with a linebacker? He's a beast! Last year he had these numbers against us:

Keep an eye on him. If we can control or contain Gronk, it'll go a long ways towards winning this one.

Avinash: The Gronkowski brothers haunted my nightmares last season. What were the chances that both of them would score on us and beat us on two separate teams?

Anyone know how good Arizona's O-line is? Experienced, green, somewhere in between? That could be the key to winning this one. 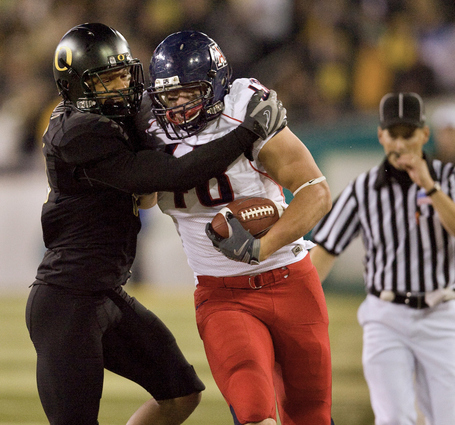 TwistNHook: The official Pac10 site itself believes their OLine wont be that good:

Prolific quarterback Willie Tuitama is gone, along with stellar WR Mike Thomas and NFL-bound OT Eben Britton, so a dip might be expected in the Arizona offense in `09. The Cats don't think so, however, as a number of notable returnees breeds optimism the UA spread offense will still be potent. QBs Matt Scott and Nick Foles will battle it out for Tuitama's vacated spot, and whoever wins that competition will have plenty of help around him. The Cats did a good job of running the ball last year and 1,000-yard rusher RB Nic Grigsby is back, along with talented backup RB Keola Antolin. Also back is All-Pac-10 TE Rob Gronkowski, widely considered the best in the nation at his position. Some rebuilding is needed on the offensive line with C Colin Baxter and OG Mike Diaz the starting points.

The name "Keola Antolin" gave me Vietnam-esque flashbacks. I've been in the fetal position for the last 20 minutes rocking back and forth on that one.

Man am I happy, though, that Mike Thomas is gone. He was the only receiver to do better than Gronk against us last year. They kept throwing those Steve Smith-esque shadow routes where he is in the flat and then steamrolls his way to the first down markers. AHHHHH!

Arizona finished 2nd in the Pac-10 last year for average yards per passing attempt at 7.7 yards per attempt. This was when Arizona had Willie T. and Mike Thomas... but now they're both gone.

Arizona had the best field goal percentage in the Pac-10 last year with a 87.5% success rate. Their kicker from last year, Jason Bonzio, has graduated.

Avinash: Well, their offense looks like they're in as bad a shape as their ASU brethren.

How about their defense? 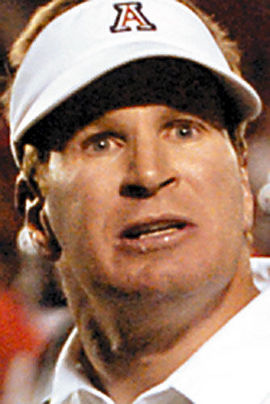 TwistNHook: Well, it is looking solid. They might have a team similar to 2008 Cal. Staunch D and hope their O can rebuild quickly.

What you need to know: It’s time to start heaping more credit on defensive coordinator Mark Stoops, who molded last year’s unit-in-transition into one of the Pac-10’s stingiest defenses. Now that he’s got 10 players back with starting experience, this could be the best Arizona defense since Dick Tomey was roaming the sidelines. The strength of the group is a talented, Devin Ross-led secondary that was a microcosm of last season’s improbable results. Combine their shutdown skills with the relentless pass rush of DE Brooks Reed and DT Earl Mitchell, and opponents might be well-served to avoid the airways. That’ll put added pressure on a run defense that’s a little less dependable and a lot more likely to be tested this fall.

They appear to be returning many of their players. Their secondary looks great with Devin Ross and Robert Golden. A weakness is apparently the size of the front seven and their run D. That article does a great in depth analysis of the D. What do you guys think?

When I hear "weakness is run D" that makes me happy. It works in perfectly with one of our strengths.

HydroTech: Devin Ross is still around? Seems like he's been around forever.

TwistNHook: So, how do you guys see this one ending up?

I think that Arizona's D will be solid, but their O will take a step back without key players like Mike Thomas and Willie Tuitama. They still have Gronk, but, at home especially, I think we can handle him. I think Cal will win this, but it won't be a blowout. 3-2.

Avinash: I sometimes wonder if you know which sport we're covering.